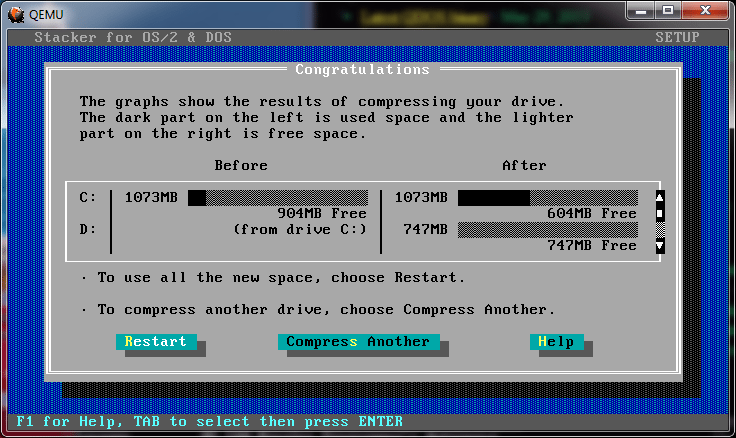 Contents of the FREESPC.DOC file

Introduction
============
FREESPC was written to provide an overview of the available disk space on
an MS-DOS computer system, with commas in the numbers, so it's easy to tell
100,000 from 1,000,000, or to tell 1,000,000 from 10,000,000. Then STACKER came
along, and FREESPC learned how to recognize a STACKER drive, to exclude STACKER's
provided space from the total of "real" disk space (the space occupied on the
host drive is counted there). Then we delved into "Undocumented DOS" to account
for and report SUBSTituted and JOINed drives. Finally, the volume label was
added to the display.

The CDS program, a derivative of FREESPC, reports the current directory on
each drive (like asking for all the CDs in your system), along with all of the
JOIN and SUBSTitute information. It's a handy summary of your logical disk
structure.

Notes on FREESPC
================
The prefix "Disk"/"Flpy" should report "Net " for a networked drive, but
Novell Netware does not use this flag; other networks might. (For unusual media,
the program reports the media descriptor, drive number, and unit number here.)
The column after "used" is the system ID string from the drive's boot sector;
sometimes this is not as meaningful as one would like. The "*" indicates that
the drive's Total space is excluded from the bottom line Total (for Stacker and
Floppy drives). The end of each line is the Volume Label from each drive. The
lines with "=>" are SUBSTituted drives. JOINed drives are reported with an extra
line. Floppy disks are deliberately NOT reported, because checking them is slow,
and space on a floppy is not really interchangeable with space on the hard drive.
The numeric fields will report values up to 9,999,999,999 (9.9+ gigabytes).

Notes on CDS
============
The prefix is the same as in FREESPC. The current path on each drive is
given, with a trailing \ always supplied for legibility. For SUBSTituted drives,
the current path on the target drive is reported, and the underlying path on the
host drive is also reported. For JOINed drives, there is no path since the
JOINed drive cannot be accessed under its own drive letter; the location to which
the drive is JOINed is reported.

Conditions of Usage
===================
These programs are SHAREWARE; you are free to use them and share them with
your friends, subject to only a few restrictions:
(1) The programs must be distributed UNMODIFIED and TOGETHER and WITH THIS
DOCUMENT FILE.
(2) The programs MAY NOT BE SOLD. If the programs are included on a
shareware disk, the charge for the disk may not exceed $4.00 plus reasonable
shipping and handling charges (not more than $4.00 for ground shipping).
(3) There is no charge for use of these programs in a personal or non-profit
charitable or educational setting.
(4) If either program is to be used in a commercial or for-profit or
government environment for more than a 30-day trial period, a site license is
required. Please contact me for details. The fees are VERY reasonable.
(5) This program is offered AS IS, with NO WARRANTIES EXPRESSED OR IMPLIED.
It works on all the systems I've tested it on, but I cannot be responsible for
problems that arise when you use it on your system. If you choose to try or use
this program, you accept responsibility for any problems that arise.

Compatibility Notes
===================
MS-DOS: Versions 3.1 through 5.0 are supported. Variations in the
undocumented DOS structures are accommodated for these versions. The programs
will exit with an informative message if run under other versions of DOS.
STACKER 2.0: The Free space on the STACKER drive is included in total system
Free space. The Total size of the STACKER drive is NOT included in the total
system Total space, because the size occupied on the host drive IS included.
Norton ERASE PROTECT 6.01: If EP is enabled, files in the TRASHCAN are
counted as available free space, just as reported by the DIR command.
FREESPC and CDS are written in Turbo Pascal 6.0. The generated code will
run on an 8086 through '486 processor. The programs have been tested on 8086,
'286, and '486 processors, and under MS-DOS 3.3 and 5.0.

Contacting the Author
=====================
This is my first shareware release, though I've been programming on other
platforms since 1964. I welcome your comments; but please save the flames for
your barbecue. I will be happy to consider variations or options which you think
would make these programs more useful to you. Among the features I've been
considering are command line options to report floppy disks; to report
information from the Drive Parameter Blocks; and to report separate totals for
local and network disks. Ask, and you may well receive.

You can reach me on either of the following local bulletin boards. Because
BBS systems think people have one-word last names, these systems know me as
"Rainer vonSaleski". You can also contact me via the Post Office.

Thank you for your interest!