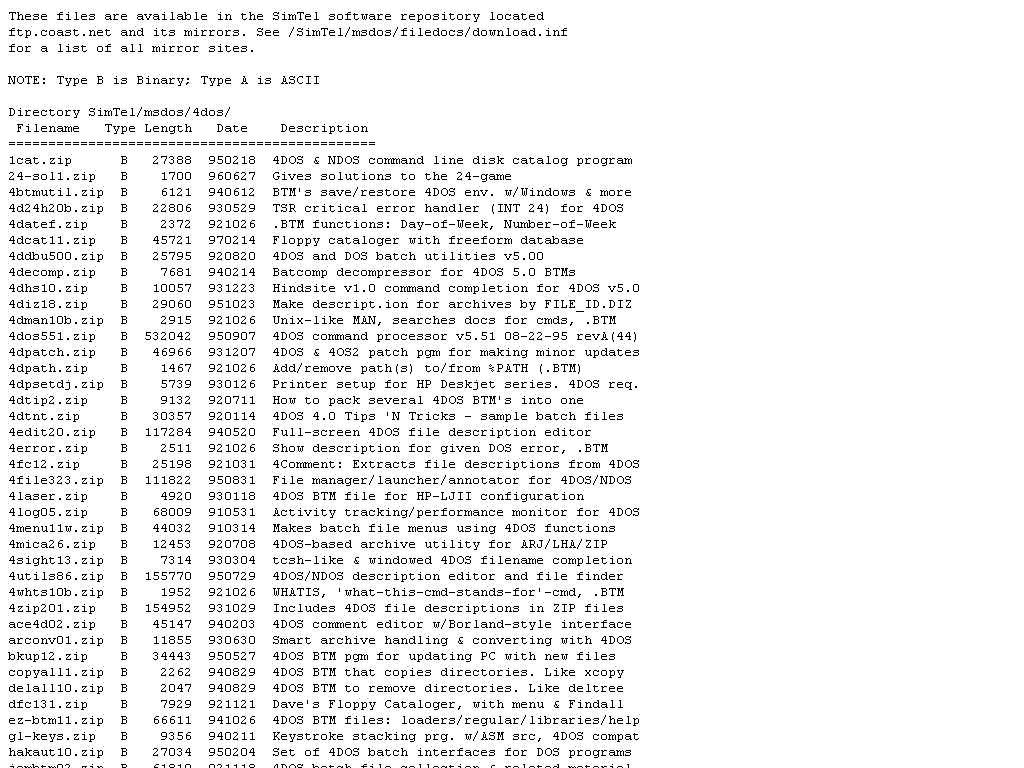 Contents of the VIZ.DOC file

VIz is a small resident program that accelerates BIOS (and DOS) video input
and output in text mode; it can be used with IBM-compatible MDA, EGA or VGA
adapter cards and Hercules HGC and HGC+ cards. In its present version, VIz
produces video interference ("snow") in old CGA cards; for such systems you
can use VIz-CGA, a snow-free, 8088-CPU oriented version.

In addition, VIz includes an independent, resident component for displaying
a block cursor, either continuously or alternating with a line cursor at an
adjustable rate of alternation. The latter display is well suited for easy
localization of the cursor in some laptop screens.

Finally, VIz also contains an independent, resident ANSI-filter driver that
mediates a subset of the ANSI escape sequences to control the console. This
filter can be used, instead of ANSI.SYS, to implement ANSI escape sequences
to control video display, with the advantage that can be turned off and on,
and removed from memory without rebooting.

All 3 resident modules occupy a total of less than about 1800 bytes of RAM.
Depending on the system configuration and BIOS version, video accelerations
by a factor of between 2 and 10 have been obtained.

This software is user-supported; the present release, although lacking the
options marked by asterisks, is a fully usable program. You may test this
release for (in)compatibilities with your system, but after the testing is
completed you are requested to order a registered copy of the full release
of the software from the address at the end of this documentation.

If you would rather use this unregistered copy, consider making a donation
to the Children's Hospital of Washington DC, for indigent children in need
of medical care. Every year in the USA, infant mortality claims the lives
of tens of thousands of children before their first year of life, and most
of them come from families below poverty level... Please send to the same
address a check payable to the "PATIENT CARE FUND, CHILDREN'S HOSPITAL" on
the obverse, and marked "For Deposit Only" on the reverse. Donations will
be sent to Children's Hospital. Please identify the program for which you
are making the donation.

See the final part of this documentation for information on the Licensing,
Distribution, Warranty, and Limitation of Remedies of this software.

There are 3 basic ways of producing character-oriented, text video displays
in DOS computers: (1) using direct video memory mapping, which is extremely
fast but dependent on the video hardware and has a limited portability; (2)
via BIOS services, provided by the first "hidden" DOS boot file and usually
augmented by the video adapter, which are not as fast as direct mapping but
more portable; and (3) via DOS services, provided by the other "hidden" DOS
boot file and sometimes augmented via installable device drivers, which are
much slower than the other two approaches, but have greater portability and
permit additional operations such as redirection.

Many of the DOS and BIOS video services can be accelerated using a resident
program that intercepts the calls made to such services, and implements the
video operation with faster instructions. Because of the nature of DOS and
of BIOS services, the interception must occur at the input site of the BIOS
services (interrupt 10h), whereas it can occur at the input site (interrupt
21h) or output site (interrupt 29h), or both, of the DOS services.

VIz is a utility that accelerates many of the basic text-video services and
allows changing the video mode, page and font of the display as well as the
raw or normal mode of DOS video output. When used in a VGA/EGA system, VIz
also permits control of the red, green and blue mixture that determines the
color of each of the 16 registers of the color palette, and the RGB mixture
can be modified to suit user preferences. VIz also permits controlling the
frequency (pitch) of the bell's tone.

VIz updates cursor position through direct hardware commands. In most video
systems, such commands can be sent out as one 16-bit (Word) value or as two
successive 8-bit (Byte) values. The word-out method of addressing, which is
used by other programs (e.g., Microsoft WINDOWS), yields faster positioning
of the cursor but may not work with some older clone systems.

Registered VIz releases use cursor word-out addressing; to verify that your
system can handle this method, you can enter the command 'VIZ ?H' to see if
the cursor appears at the indicated position. If not, the video system only
allows byte-out addressing, and registered users need to contact the vendor
for a byte-out release of VIz free of charge.

VIz is entirely written in assembly language. Each VIz version consists of
4 processor-type releases (086, 268, 386, and 486), where the code has been
optimized for the specific type of 80x86 processor. This is needed because
the processors currently available differ markedly in instruction execution
times, and the availability of memory caches affects those times further by
influencing both speed of instruction fetching and memory access. The type
and degree of code optimization vary with the processor model.

In addition to standard (086) assembly language instructions, the 286, 386,
and 486 releases of VIz also use 286-, 386- or 486-specific instructions in
real mode only (which is the native mode for 086 processors). The releases
differ slightly in resident size.

VIz installs itself as a resident program that can be invoked repeatedly for
modification of its parameters, without producing multiple copies on memory;
the accelerator module of the resident uses less than 1,000 bytes of RAM. To
maximize speed of code, but minimize resident size, acceleration only occurs
for video page 0 in a text mode (1-3, color; 7, monochrome). In other pages
or graphic modes, VIz becomes inactive and is automatically reactivated by a
change to page 0 in text mode.

The acceleration provided by VIz depends on several factors, including video
BIOS version, adapter manufacturer, x86 processor model and clock speed, use
of graphics coprocessors, and whether the video BIOS is shadowed or remapped
to faster RAM. Generally speaking, a smaller acceleration is to be expected
in machines performing faster BIOS operations (i.e. tighter ROM code, faster
CPU, shadowed or remapped ROM) than in slower machines. The relative weight
of individual factors, however, may yield unexpected results.

VIz updates relevant parameters in the BIOS data area (segment 40h), such as
cursor position (page 0 only) and type, video mode, page, and font, that are
also processed by VIz; while such updating degrades video acceleration time,
it also decreases the possibility of conflict with foreground utilities that
use BIOS data but bypass BIOS calls.

To help cursor visualization in screens where the cursor is not easily seen,
as in some laptop displays, VIz provides a small resident module that allows
for the display of a (full-)block cursor, either continuously or alternating
with a line cursor. The alternation rate can be adjusted in steps of 54.9 ms
between about 0.055 s (/V1) and 5.5 s (/V99). A zero alternation rate (/V0)
produces a continuously present block cursor. For the module to be loaded in
memory, VIz must be installed with any /V switch (see below), and it adds an
additional 100 bytes to the resident size of VIz.

Very short or very long alternation rates are distracting or hard to follow.
When selecting a rate for laptop displays, start with a value of n=9 (.50 s)
or so.

Block cursor alternation can be turned off by making this resident quiescent
with the switch /V+ (until its reactivation with /Vn). All cursor operations
use direct commands to the hardware, and assume register-level compatibility
with the Motorola 6845 CRT controller. This chip is present in MDA, CGA, and
HGC cards, while a 6845-compatible CRTC is a custom LSI chip in the IBM-EGA,
part of the Memory Controller Gate Array on the MCGA, or a part of the Video
Graphics Array on the VGA.

The normal (hardware-controlled) blinking of the cursor is not eliminated by
VIz; hence, depending on the alternation rate selected, a two-beat frequency
may be noticeable.

MS-DOS and IBM PC-DOS files include ANSI.SYS, a console filter driver that
mediates a subset of American National Standards Institute (ANSI) standard
escape sequences for video functions. In addition, this filter mediates a
supplementary subset for keyboard functions (such as key reprogramming).

VIz has a second, independently installable resident module that implements
standard ANSI escape sequences to control the console video functions. This
ANSI-compatible filter uses less than some 800 additional bytes of RAM when
installed. Once installed, this ANSI filter module can be turned off or on
independently of the other modules, or jointly uninstalled from memory.

The filter does not provide by itself much acceleration of DOS video input/
output as far as ANSI instructions are concerned. Its advantages are small
resident size, the capability of being turned on or off, and its harmonious
working with the acceleration module of VIz.


COEXISTENCE WITH OTHER ANSI FILTERS

The installation of the ANSI filter can be made contingent on not detecting
the presence of ANSI.SYS or another ANSI-like utility intercepting the FAST
CONSOLE interrupt (29h) of DOS, such as ANSI.COM (Copyright 1989 Ziff-Davis
Corp.), or the potential presence of such utilities may be ignored (and the
filter forced to install).

The presence of an installed ANSI-like utility can be ascertained using the
Status/Usage/Help panel displayed when the command 'VIZ ?' is issued; the
Status line at the bottom of the screen displays one of the following:

ANSI.SYSIndicates that interrupt 29h (see below) points to a
resident code containing a device driver header with
the attributes of a character device servicing calls
to INT 29h and the device name 'CON.' This is likely
to be ANSI.SYS or an ANSI-compatible device driver.

ANSI.COMIndicates that interrupt 29h (see below) points to a
resident code containing the string 'CON ' at the
place where the device driver name should be, but it
does not contain other elements of the device driver
header. This is an ANSI-compatible resident utility
of the type of ANSI.COM.

ANSI: NoIndicates absence of the above conditions.

Selection of the foreground and background colors on a color display or
the text attributes on a monochrome display system. The sequence syntax
is