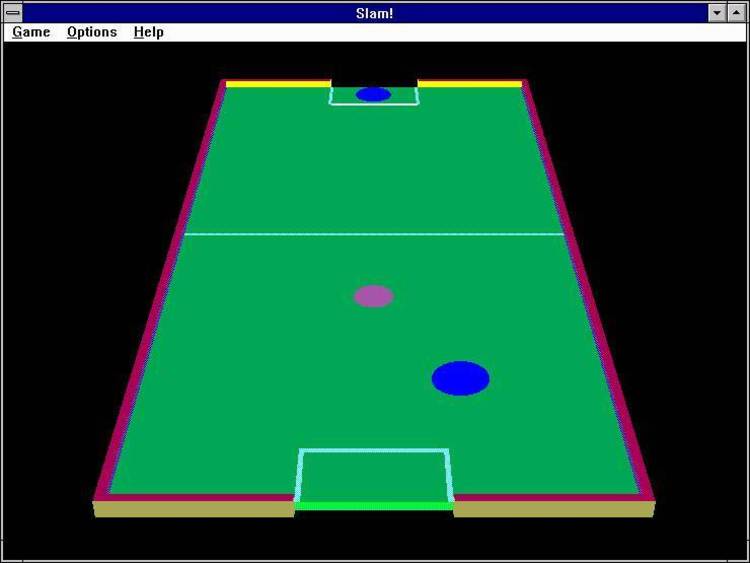 Thank you for trying Slam! I started writing this game back when Windows
3.0 was still in beta test, and worked on it for a few days, shelved it
for many months, worked on it another few days, etc. Despite my busy work
schedule (and my unexpected attainment of a social life and subsequent
marriage), I have finally FINISHED the program!

My goal was to make the interaction between the puck and the paddles quite
realistic. Therefore the program is constantly doing alot of 32-bit and
some 64-bit computations. For this reason, I don't recommend running this
game on anything less than a 33MHz 386DX system. Despite my best efforts,
there is still some inaccurate behavior, such as the puck sometimes bouncing
off the paddle faster than would seem reasonable. Attempts to fix this have
made the movements worse instead of better, so I have decided that enough is
enough for now -- the game is still quite playable and fun! I have pretty
much forgotten my high school physics, and have had to build my transfer-of-
momentum equations from trial and error. Hopefully in future versions I
will be able to "tweak" the math to where the behavior is totally accurate.

Another area that needs work is when you or the computer tries to "smash"
the puck against the wall with the paddle. This is very difficult to deal
with at the mathematical level, so for the time being I have taken the cheap
approach and allowed the puck to travel through the wall, which is immedi-
ately detected and the puck put back on the table on the other side of the
paddle. Only very occasionally you will see the puck make a brief appearance
outside the table boundaries.

The program runs fine under Windows NT, with the exception that the cursor
will not be hidden when you "grab" your paddle. This seems to be a restric-
tion that Windows NT imposes on Windows 3.1 programs, presumably to prevent
a crashing program from taking the cursor with it. Depending on your mouse
settings, this may restrict your paddle's movement and make the game unplay-
able. I will be porting the game to NT pretty soon, and hopefully that
version will be able to hide the cursor! (It will also be the first version
to support network play.)

I have not tested the program under OS/2 2.1; it may also prevent the pro-
gram from hiding the cursor.