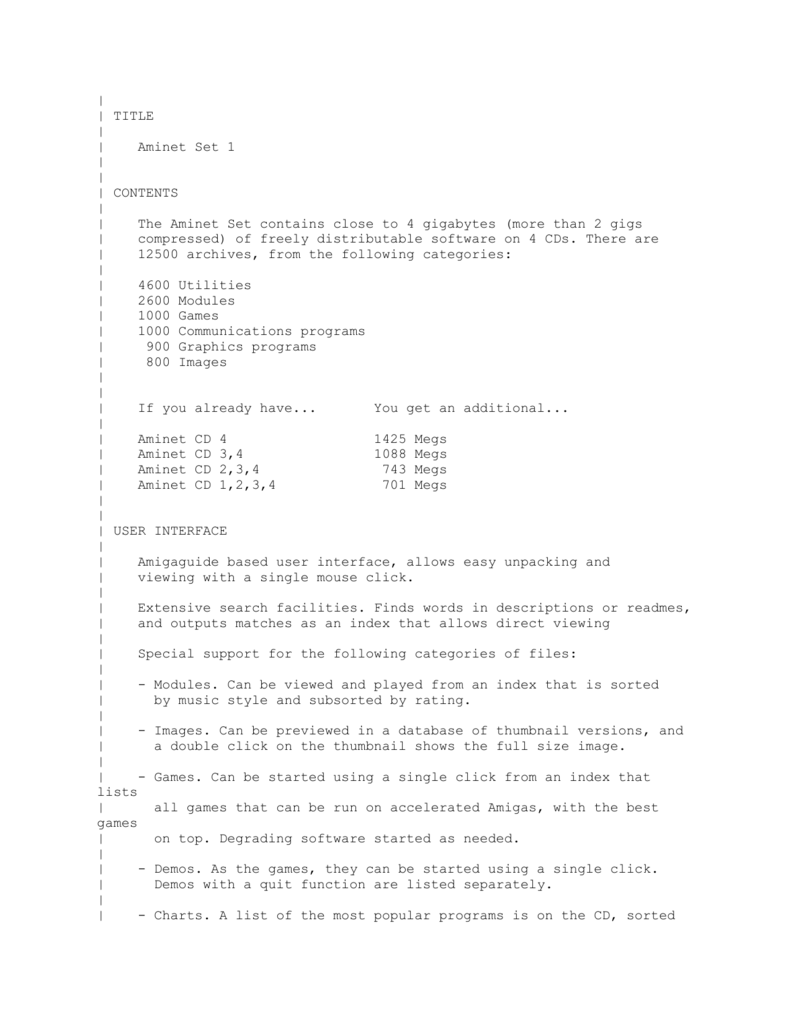 Contents of the CATALOG.TXT file


This catalog lists files that are included on my registered disk set, which is
available through December 31, 1995. Until then, these items are available on
three 1.44M disks for a total of $11.95 postpaid. After December 31, 1995, all
mail will be returned, and there will be no further sales or service.

Foreign orders must be by international money order, traveler's check, cash,
or otherwise payable directly through a U.S. bank.

This is a good library for people curious about the workings of their
computer, learning how to use libraries, or interested in writing their own
assembly language routines for QuickBasic. It is a collection of scores of
simple BIOS and DOS-related routines written in assembly language. AABAS is
not as fancy as my other BASIC libraries, but it's quite useful in its own
right and a great learning tool. Includes source code (MASM 6.0).

This library provides routines for QuickBasic 4.x which mimic new functions
and commands provided by other Microsoft BASIC compilers, such as PDS 7.x
and Visual Basic for DOS. These include disk routines and a powerful
selection of time and date functions. Includes source code (MASM 6.0).

This is a library for Microsoft BASIC compilers: QuickBasic, PDS, and
VB/DOS. It contains an equation solver; far string support (even for
QuickBasic!); powerful file handling, with buffering, critical error
handling, and sharing support; telecommunications for COM1-COM4; memory
management and pointers; a powerful virtual windowing system; a high-res
timer and delay system (accurate to milliseconds); more!

Extensive graphics support is built in. It handles all standard modes: MDA,
Hercules (no TSR needed), CGA, EGA, VGA, SuperVGA (Tseng 4000 and VESA),
Epson-compatible dot matrix printers, and HP-compatible laser printers.
Printer graphics output can be previewed on the display. Special
non-standard VGA modes are included, providing up to 360x480 graphics in
256 colors on ordinary VGAs. Fonts, polygons, multi-colored text-- it's all
in here, and more.

BasWiz math support will handle even the most demanding applications. It
extends BASIC's own math and provides two other alternatives: fraction math
and BCD support. With BCD, you can have up to 254 digits! This is no
minimal four- function BCD package, either. It includes a wide range of
support, including many trig functions, constants, and conversions. Equally
good for huge and tiny numbers.

BCMD is a set of new and improved DOS commands designed to coexist with
your existing DOS command processor for total compatibility with your
existing applications. New utilities include calculators and calendars,
keyboard enhancers, text file processors, assorted filters, and the ability
to attach descriptions to files (NDOS and 4DOS compatible), among other
things. There are many improvements to existing DOS commands as well. For
example, the BCOPY command allows you to copy many files to many locations,
with exception specifications:

This example copies all .TXT and .DOC files in the current directory,
except for README files, to both A: and B: drives. You can also specify
quiet mode, prompting for confirmation, the desired case of filespecs, file
attributes, "test" mode, and much more. Similar capabilities are included
in all applicable commands. Help is available for each command by using the
/? switch, as well as through an online reference.

This utility provides a powerful meta-language for PDS, QuickBasic, Visual
Basic for DOS, PowerBASIC, and even the QBASIC provided with DOS 5.0. It
processes your code before the compiler gets to it, allowing conditional
compilation, underscores within variable names, flexible "include" files
(which may even contain SUB and FUNCTION definitions), name substitutions,
and more. C programmers have had preprocessors for years-- now there's one
for BASIC too!

Like EXE2BIN, this utility converts .EXE files to .COM files. It's smaller
and faster, though, as well as offering a few additional conveniences.

This program examines .EXE files for validity and can tell you whether the
.EXE was designed for use with Microsoft Windows. If the .EXE file is
determined to be too long, as it might be if you got it using an older file
transfer protocol, you are given the option of truncating it to the right
size.


IBRARY: Library for the ASIC compiler.

This library is for ASIC 4.0 and later versions. If you haven't seen ASIC,
it's a shareware BASIC compiler which provides both command-line and
editor/environment support. It can produce .COM, .EXE, and .OBJ files. For
more info about ASIC, write its author:

Ibrary contains over 200 routines which add to the ASIC compiler. It
provides support for the full range of color graphics modes: SCREEN 1, 2,
7, 8, 9, 11, 12, 13, N0, and N1. The latter two modes are special 256-color
modes which provide up to 360x480 on standard VGAs! A large set of math
extensions, equipment detection routines, mouse support, DOS file and
directory handling, cursor on/off/info, screen save and restore, DOS
output, string functions, keyboard shift and toggle info, and other
goodies.

For AT-class machines only (286, 386, 486, etc), this utility allows you to
speed up your keyboard (or make it less sensitive for kids, etc). You can
also swap the positions of the CapsLock and Left Ctrl keys, useful for
civilizing the 101-key "enhanced" keyboard.

This is a management tool for handling and customizing BASIC libraries. It
allows ready creation of subsets of existing libraries, automatically
resolving any interdependencies for you. Tools for updating and extracting
from libraries are also included.

LibWiz is strongly recommended for my BasWiz and PBClone libraries, due to
the vast number of routines involved.

This must be the ultimate tool for manipulating .OBJ files. You can select
files for inclusion or exclusion using wildcards, time, date, and size
comparisons, and even the results of a search through the .OBJ file. View
the file's stats, rename publics, externals, and default libraries, delete
default libraries and languages, check for validity, repair checksum
errors-- ObjTool has it all. Useful for reducing the size of libraries,
resolving conflicting routine names, patching .OBJs and just snooping
around! Includes full BASIC and assembly language source code.

This is a library for Turbo Pascal and compatibles. It provides input
handling (keyboard, mouse, and joystick), music, BCD math, archive
directories, string and math enhancements, and other goodies.

The math routines provide a numeric expression evaluator which allows you
to convert equations into numbers at run time. The math capabilities of
Pascal have been expanded significantly with new trig, inverse trig,
hyperbolic trig, and other functions. For the ultimate in numeric
precision, BCD math is also provided, allowing you to manipulate numbers of
up to 254 digits-- not just with the basic four functions, but trig, square
roots, factorials, constants with hundreds of digits of precision, etc;
formatted output can be done to your specs. You can place the decimal point
anywhere you want, so this works equally well with very large and very
small numbers. String support includes compression, encryption, fuzzy
comparisons, and other goodies. The music manager works like the BASIC PLAY
language and BBS "ANSI music". Archive routines allow getting full
directory info from .ARC, .ARJ, .LZH, .PAK, .ZIP, .ZOO, and self-extracting
.EXE archives.

Source code (MASM 6.0 and Pascal) provided on registration. Registered
owners may upgrade to later versions for $10.

This library is like my PBClone library, but is compatible with the full
range of QuickBasic compilers: QB 1.0 - 4.5. It is much easier to set up
than PBClone but does not support all newer compiler features and offers
some 300 routines. No printed manual. See the description for PBClone,
below.

This is a library for Microsoft BASIC compilers: QuickBasic 4.x, BASCOM and
PDS, and Visual BASIC for DOS. It is the successor to my old ADVBAS
library. With over 610 routines, this library covers a little bit of
everything: mouse and joystick support, SoundBlaster, disk wrangling,
string mangling, keyboard input, equipment detection, graphics, a wide
variety of display management, directory searching, text compression,
viewing archive directories (.ARC, .ARJ, .EXE, .LZH, .PAK, .ZIP, .ZOO),
matrix math, dates, times and countdowns, sorts, binary searches, graphics,
and... well, it's hard to describe such a collection other than to say
"it's probably in here"!

This is a DLL for use in programming for Microsoft Windows. It is oriented
specifically towards Visual Basic, but can be used with other Windows
languages that support DLLs if you know what you're doing. There are 79
routines in the first version, including bit manipulation, array
initialization, PEEK, POKE, and SWAP routines, checksums and CRCs,
equipment information, string testing, and more.

A collection of routines which allow you to access internal
variables for QuickBasic 4.x, BASCOM 6.x, and PDS 7.x. You
can retrieve the screen mode, display adapter type, DEF SEG
setting, I/O redirection status, current screen colors, and
many other useful values.

Textris is a little like Tetris and a little like Scrabble. Random letters
fall from the sky. Fit them together to make words for points. Unused
letters remain behind, cluttering the arena until at last there is no space
left to build new words. Good spelling practice and addictive fun! Requires
an EGA, VGA or better display.

This tiny TSR provides a running display of the time. You may
specify screen position, 12 or 24 hours, whether to display
seconds, the colors to use, and other parameters. Two
versions are provided-- one for 8088 PCs and one for later
machines.