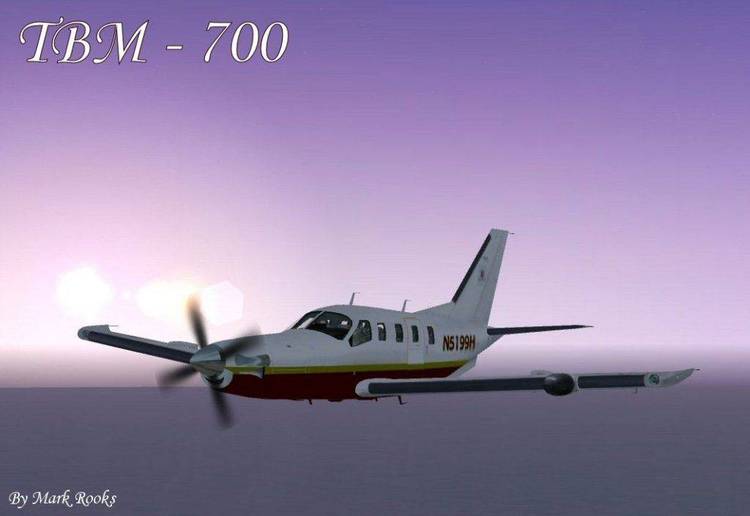 This is a combination of a SIM file created with ASD in November 1990
by Ed Tedesco with an AAF designed model created in October 1992 by Rod
Conklin. We decided to combine these two efforts in order to provide the
best-flying and best-looking TBM 700 in a single archive.

This is RC's first attempt at designing an aircraft using Mallard's
Aircraft and Adventure Factory. He has included all the components
used to make up the aircraft as well as the finished product. Any
comments (good or bad) are invited. If you do not have AAF, you can
still fly the aircraft. Just use the first two files mentioned below.
After having played with AAF for two weeks or so, I highly recommend it.

Files in this Package:

TBM700__.SIM - The Aircraft for use with FS4. Place these files
TBM700__ in your flight simulator directory and select
the aircraft as you would any other.

TBM700.SC1 - If you have ASD, this is scenery that I used to
TBM700.MOD to introduce the Aircraft at Meigs Field.
The TBM700 on the blue carpet is the flyable one.
The keys are in it, just select the cockpit view
and start 'er up.

TBM700W.SC0 - This is the library object version of the TBM700.
If you have SEE04, you can place a copy of the
plane in you scenery. However, you should be
aware that the aircraft contains pretty dense
details and will slow the frame rate quite abit.

TBM700.AFX - All the components of the aircraft packed up.
Just create a directory under you AAF directory
and select "Unpack" from the Administration menu.
My naming of parts leaves much to be desired, but
everything should be in there.

As this is my first attempt at using AAF to design an aircraft,
I have encountered some problems. Some of these are due to my inexperience

and some may be limitations of FS4 to display custom aircraft. You are
welcome to experiment and correct my design as needed. Some of the
hiccups I found were:


The wings when viewed from the cabin at night turn light green
instead of grey. I was not able to find the cause.

The resolution of the aircraft in FS4 is somewhat less than
that in AAF. Therefore when viewing the aircraft from the
outside view, many "sawtooth" edges show up. Also, minor details
are lost. For instance, the cabin windows were designed with
rounded edges, but when viewed in FS4, they appear as regular
rectangles. I have also noticed that other items like the prop
tend to appear misshapen when viewed in FS4.

There is some "bleed through" of objects in the fuselage. I
attempted to minimize this, but was not successful in all cases.