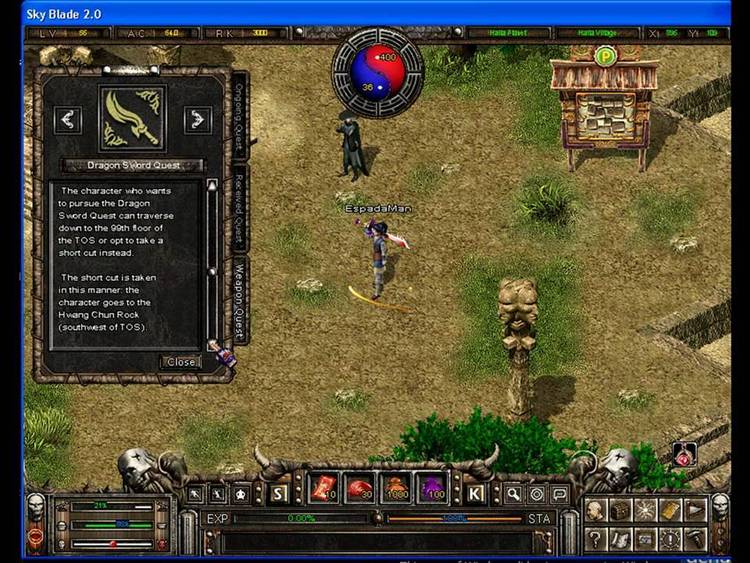 Sword Quest 2 is a fantasy
roll-playing game based in a world of
dragons, knights, and magic. The
player controls a character who is
whisked from his/her own world into
another where he/she is charged with
freeing the land from the clutches of
an evil dragon king. The player
selects what items the character will
purchase and use during his/her quest.
During the search the character will
be challenged by many evil critters
and confusing puzzles that only
persistence and a good blade can
conquer.

Contents of the QUEST2.DOC file

TALE OF THE TALISMAN


Sword Quest 2 is a fantasy roll-playing game based in a world
of dragons, knights, and magic. The player controls a character
who is whisked from his/her own world into another where he/she
is charged with freeing the land from the clutches of an evil
dragon king. The player selects what items the character will
purchase and use during his/her quest. During the search the
character will be challenged by many evil critters and confusing
puzzles that only persistence and a good blade can conquer.


To run Sword Quest 2 go to the drive and directory
containing all of the files and type "QUEST2" at the
DOS prompt. If you have not played the game before, you
will need to choose the "CREATE A NEW CHARACTER AND GAME"
option.
e.g. C:\QUEST2 >QUEST2

If you wish to bypass the opening screen and options
you may type "QUEST2" followed by a space and the name of a
character you have previously created.
e.g. C:\QUEST2 >QUEST2 MYCHAR
2


To run Sword Quest 2 go to the drive and directory
containing all of the files received with Sword Quest 2
and type "QUEST2" at the DOS prompt.
Once the game has loaded a title screen will be displayed
with the words "PRESS A KEY TO CONTINUE" flashing; at this
point you should press a key. A menu will now be displayed:

For the first time the game is played you should choose the
"T...THE STORY" option by pressing the T key and read the
background story of the game. When you are finished reading you
will again find yourself at the opening menu. All of the
other options, with the exception of CREATE and RETRIEVE, work
this way, so have no fear.
Creating a new character and game :
-Press the C key at the opening menu
-Type the name you wish to have for your character
(No spaces or symbols, and up to 8 characters in length)
-Choose which attribute of the character to edit by
pressing the letter corresponding to the attribute, then edit
the attribute by pressing the + key to increase or the - key to
decrease.
-Strength: Number from 5 to 18 representing the character's
strength in a fight
-Skill: Number from 5 to 18 representing the character's
skill in a fight
-Dexterity: Number from 5 to 18 representing the character's

dexterity in a fight
-Gold: Amount of money the character will start with
-Press ENTER when finished with each trait.
-When you are done editing the character press ENTER once more
and the game will begin.
Retrieving a character and game :
-Press the R key at the opening menu
-Type the name of the character you wish to retrieve the same way
it was typed when the character was created, followed by the
ENTER key.
Sound setup for the game :
This option allows you to use the PC-speaker for music if you
have an ADLIB compatible sound card, and to enter the game with
the sound off.
-Press the O key at the opening menu
-Press either Y for yes or N for no at the two questions you will
be asked. If you wish, you can press O again from the opening
menu to change your choices.
3
In the game :
Once in the main part of the game you will find a number of
"windows" on the screen: a view window showing what your
character can see at the top left; a fight window that shows an
enemy when in a fight at the top right; a small rectangular
dialogue window that shows conversation and messages at the
middle right; a menu window that gives your options at any time
in the lower left; a status window that shows your vital
statistics in the mid bottom; and an item window in the lower
right that shows your characters armor, weapon, shield, and other
items.
Movement:
Moving the character is accomplished by pressing the arrow
key corresponding to the direction you wish to move the
character. When the character is moved over a town, cave,
door, stairway, or temple the game will ask if the character
is to enter. To leave a town just walk out of the town and the
game will ask if the character should leave the town.
View Window :
The view window is located at the top left of the screen. It
displays the area around the character that the character can
observe at any point in time. In caves this area is smaller due
to the absence of light (though it can be increased by use of
magic or a torch).
Fight Window :
The fight window is located at the top right of the screen. It
shows the enemy that the character is fighting during a fight,
otherwise it just shows a picture of the name of the game.
Dialogue Window :
The dialogue window is located at the middle of the right side
of the screen. It shows anything that an other person in the
game says to the character, any questions that the game has of
a yes or no type, and shows the events of a fight.
Menu Window :
The menu window is located at the lower left of the screen. It
gives the options you have at any time in the game, and the keys
corresponding to those options. The menus are fairly self-
explanatory, and no harm can come from experimenting. The only
time in which the options cannot be found in the menu window are
when a question is being asked of the player in the dialogue
window (see above), in which case the user must answer that
question. The game will automatically display either the normal
or the fight menu depending on whether the character is in a
fight; the item and magic menus will only be displayed if the
user chooses to either use an item or cast a spell from either of
the other two menus.

Magic menu: A spell will only be shown if the character is of
high enough level to cast it and has possession of a
spell book. The numbers that will be next to the
options are the number of magic points that are required
to cast the spell. Spells sometimes malfunction, do
nothing, or miss their target.

Item menu: Items will only be shown if at least one is in the
character's possession.

W......WINGS : Press the W key to use wings which cause the
character to fly for a while over obstacles
(water, mountains...)
F...FIRE.JAR : Press the F key to throw a fire jar at an enemy
during a fight.
(The jar douses the enemy with flames)
C...CURE.PO. : Press the C key to have the character swallow
a curing potion
(Raises hit points to the maximum according to level)
D......DARTS : Press the D key to throw a pouch of magic darts
at an enemy
T......TORCH : Press the T key to light a torch to illuminate a
cave or temple
M....COMPASS : Press the M key, followed by the name of a town
and the compass will tell how far, and in what
direction, the named town is from the character.
Status Window :
The status window is located at the middle of the bottom of the
screen. It shows the vital statistics of the character being
played.
Items in the status window:
Food : Amount of food that the character has remaining;
No food causes loss of hit points
HitPoints : A number corresponding to the character's health

Level : The character's level (based on experience)

Strength : The character's strength when healthy

Dialogue Window :
The dialogue window is located at the middle of the right side
of the screen. It will display any questions that the program
has, anything that an other character in the game says to you,
and it will give you messages on what is happening during a
fight.

Parts of the game:
Towns: Towns are represented by a picture that looks like a few
small houses. When the character is moved over the picture
the game will ask if the character should enter the town; answer
this question with Y for yes or N for no. Once in the town
the character can enter many buildings by moving over the
doorway.

Caves: Caves are represented by a picture that looks like a mountain
with a hole in it. When the character is moved over the
picture the game will ask if the character should enter the
cave; answer this question with Y for yes or N for no. Once
in the cave the character will probably want to light a torch
or cast LIGHT in order to see.
7
Caves often contain items of interest such as piles of gems and
chests of gold which the character can pick up to obtain wealth.


Temples:Temples are represented by a picture that looks like a pyramid.
when the character is moved over the picture the game will ask
if the character should enter the temple; answer this question
with Y for yes or N for no. Once in the temple the character
will probably want to light a torch or cast LIGHT in order to
see.

Be cautious when you exit a temple, though, the character's
location may be much removed from where you would expect.


NGS SOFTWARE DISCLAIMS ALL WARRANTIES RELATING TO THIS SOFTWARE, WHETHER
EXPRESS OR IMPLIED. INCLUDING BUT NOT LIMITED TO ANY IMPLIED WARRANTIES OF
MERCHANTABILITY AND FITNESS FOR A PARTICULAR PURPOSE, AND ALL SUCH WARRANTIES
ARE EXPRESSLY AND SPECIFICALLY DISCLAIMED. NEITHER NGS SOFTWARE NOR ANYONE
ELSE WHO HAS BEEN INVOLVED IN THE CREATION, PRODUCTION, OR DELIVERY OF THIS
SOFTWARE SHALL BE LIABLE FOR ANY INDIRECT, CONSEQUENTIAL, OR INCIDENTAL
DAMAGES ARISING OUT OF THE USE OR INABILITY TO USE SUCH SOFTWARE EVEN
IF NGS SOFTWARE HAS BEEN ADVISED OF THE POSSIBILITY OF SUCH DAMAGES OR
CLAIMS. IN NO EVENT SHALL NGS SOFTWARE'S LIABILITY FOR ANY DAMAGES EVER
EXCEED THE REGISTRATION PRICE PAID FOR THE LICENSE TO USE THE SOFTWARE,
REGARDLESS OF THE FORM OF CLAIM. THE PERSON USING THE SOFTWARE BEARS ALL
RISK AS TO THE QUALITY AND PERFORMANCE OF THE SOFTWARE.
Some states do not allow the exclusion of the limit of liability for
consequential or incidental damages, so the above limitation may not apply
to you.
This agreement shall be governed by the laws of the State of Washington
and shall inure to the benefit of NGS Software and any successors,
administrators, heirs, and assigns. Any action or proceeding brought by
either party against the other arising out of or related to this agreement
shall be brought only in a STATE or FEDERAL COURT of competent jurisdiction
located in Clallam County, Washington. The parties hereby consent to in
personam jurisdiction of said courts.


The program "SWORD QUEST 2" version 1.0 is a shareware program. You are
encouraged to copy and distribute this game to friends, BBS's, distributors
and others provided that the files listed below are included, unaltered, and
together.

Files to be included:

(Other files may be added by distributors and BBS's, but none listed above
may be removed)
9

Any bug reports will be greatly appreciated along with ideas for improvements.
I will try to answer any questions you have, provided you have registered
the game. I can be reached at the address above.