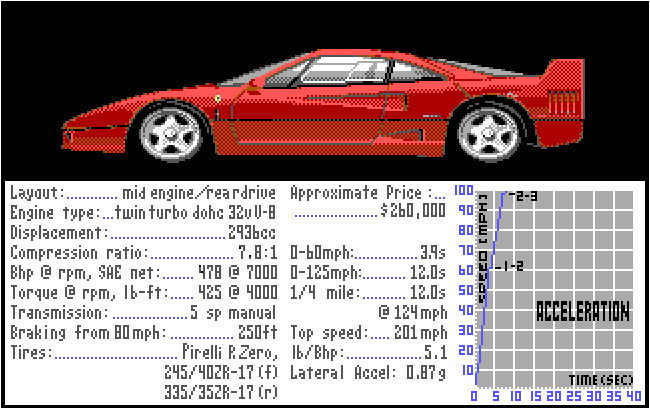 Legal stuff: While this nature of this program is in a legal grey
area, with regards to Accolade et. al., the program itself is still
protected by law. It is NOT Public Domain softwaare. It may not be
altered, copied, owned or anything else without the author's consent.
You may make a single copy of the software for a trial evaluation
period. This copy is to be used only for non-commercial purposes.
Barring extremely unusual circumstances, this software will NEVER be
commercially available from anyone but the author, so if you had to
pay money for it, then whoever sold it to you is in violation of the
law, so go demand your money back. The author accepts no liability of
any sort for any damages of any sort which this software may cause.
The software is offered "as is" and no warranties of any sort should
be construed as being attatched to it. You use it at yout own risk.

Now that that's over with: This program is basically to allow you to
create, and modify cars for Accolade's Test Drive II. While it has
been tested to a degree, it is not bug-proof yet, so I suggest you
back up the car files you have.
There are several files which affect the cars in Test Drive II.
With this program you can modify some aspects of these files, so you
might want to know what these files are & what they do.

CARS.DAT : is an ASCII text file which conains a list of the cars
which will be available in the game. Each line of the file
consists of 1) the filename prefix for the files containing the
data on that car. 2) the name, make, & model of the car.
for each car there will be several files, all with the prefix from the
cars.dat file. I will use CARX as the prefix for these examples.
CARX.BIN : contains the drive-time data for the car. This includes
all the performance characteristics of the car, as well as some
data for maintaining the speedometer, tach, etc. This is the
file that Speed Shop makes most of it's changes in.
CARXO.BIN : Contains 12 words of data affecting the performance of the
opponent's car, for when you race the computer.
CARX.SS : Contains information used when the dufus in the car waves to
you after you've selected that car.
CARXDASH.PCS : Graphics information about the dashboard you see when
driving the car.
CARXREAR.PCS : Graphics information for the view of the car displayed
on the high score screen & under the "your car" & "other's car"
headings of the main menu.
CARXROAD.PCS : Graphics info on the appearance of the car as an
opponent on the road. This is SIMILAR to, but not identical to
the files CAR1.dat CAR2.DAT and CAR3.DAT that the program uses to
display the cars you pass on the road. See the note below.
CARXST.PCS : Graphics info for the side view of the car & statisttics
sheet seen in the car selection menus.
*.PES : These are the EGA versions of the *.PCS files. The latter are
used for CGA, Herc, and (I think) Tandy graphics modes.


SPECIAL NOTE ON ????ROAD.P?S FILES: This is the warning refered to on
screen L of the program, and in the notes above.
If you really want, you can make a car look like one of the
scenery cars used by the game, but there are a few problems with
doing so. The scenery cars have no brake lights. This means
that when the opponent's car is in front of you & hits it's
brakes, the program will put fuzz on the screen, and you won't be
able to see too well. Similarly, scenery cars don't crash, so if
your opponent crashes while he looks like one the computer freaks
a bit. You can also make the cars look like cop cars. If you do
this don't let them pass you. You'll see why if you try it.
To actually make these things happen, copy one of the files:
CAR1.PCS, CAR2.PCS, CAR3.PCS or COP.PCS to CARXROAD.PCS (or
f40road.pcs etc.) If you use the EGA mode copy the .PES file
instead. CAR1 is the sedan which resembles a Mercedes. CAR2 is
the that looks like a T-bird from the front & kinda like a
mustang from the back. CAR3 is one of those damn mini-vans.


COMMAND SUMMARY:
Arrow keys: the up & down keys select the car to work on. The car
will be the underlined one in Monochrome modes. I forget what color
that shows up as on CGA/EGA.

A)dd official cars: This adds a new car into the list. This should
be used to add cars which have been officially released by Accolade,
because only these cars have their own graphics files. All the user
created cars will have to use these cars's graphics files till ver
2.0 of this program is released (if it is).

C)opy car: Makes a copy of a car. Use this to make working copies of
the cars in the game to play around with.

D)efault Values: Lets you change a few values used by the program:
Autosave, when on automatically saves cars before exiting the
program. Initially set to OFF (I think).
Official car write protect forces the program to prompt the user
before changing one of the original cars. Initially set to ON.
List length: Sets the maximum number of cars to put in the CARS.DAT
file. This number can be set to anything, but it should never
exceed 14 since that's all the program can deal with. If you are
running off of a 'play' disk you should set this to 5. The
value of this variable will be set when you first run the
program to the # of cars in the CARS.DAT file at the time.
will
Run string: this is the string used by the T) command to run Test
Drive II from within the program. Should be the same thing you
would type at the DOS prompt to run the game.
Graphics mode: This setting will determine which files to copy when
creating a new car. If you use one mode or the other exclusively
then using this setting will save some space.