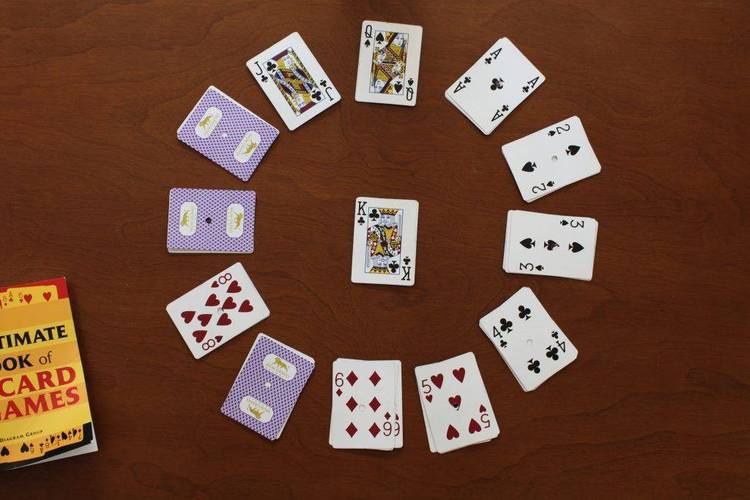 Contents of the SOL8C.DOC file


DESCRIPTION or "What is it?"

SOL8C is a solitaire game played with a standard deck of 52
cards. The object of the game is to form four columns of cards, each
column consisting of a single suit arranged in order from King to Ace,
top to bottom. SOL8C will maintain a running score for all of the
games that you have played and will update this score after every game
that you play (see STATISTICS below for details).

COMMAND LINE AND OPTIONS or "How do I start it?"

The syntax for invoking SOL8C is:

If '?' or '??' is present on the command line, the first of them
is effective and all other options are ignored.

Flags are optional; if omitted, defaults apply. Options must be
separated by a space. They may be upper or lower case. The '-' flags
are paired; if you enter more than one from a pair, the last entry
from that pair is used. Each flag must be preceded by an option
indicator; both '-' and '/' are valid. The options are defined below:

-a = player accepts every deal as it is presented. Default
-r = allows the player to reject a deal if he does not like the
possibilities presented by the layout.

The flags can be entered permanently into the environment
variable 'SOL8C'. For example, if you always want quiet and multi-game
modes, place the following line into your AUTOEXEC.BAT:

LAYOUT or "What am I looking at?"

The game is played on a tableau of 8 columns with 6 cards in each
column. The remaining 4 cards are placed on the side as your 'Hand'.
Initially, there are 12 cards that are face down in the center in the
form of an inverted triangle. These cards cannot be used until they
are turned over, which is caused by moving the card below them.

A move is made by specifying the column to which you are moving.
Thus, the play that was mentioned above would be a '2' move since you
are moving to column 2. The column may be chosen by either pressing
the number keys 1 through 8, or by using F1 through F8.

You may move any available King to an empty column, which is the
only move allowed to an empty column. When you choose to move to an
empty column and there is more than one King available, you will be
prompted for which King to move. You respond by entering the first
letter of the suit that you want to move ('c' for clubs, etc.). You
may cancel a King move by selecting another target column or by
selecting the Hint function (See HINT below).

If a column becomes longer than will fit on the screen, you will
see the indicator 'cont'd...' in the lower right-hand corner and you
can use the PgDn and PgUp keys to view the different parts of the
tableau.

You may save and quit a game in progress by pressing F10, which
will create the file SOL8C.SAV in the current directory. The next time
that you play SOL8C, the game will be restarted from where you left
off.

F9 can be used to display a possible move to you, highlighting
the card to move. Repeated pressing of F9 will cycle through all of
the possible moves. Note: SOL8C is not recommending moves; it is only
displaying the list of possible moves. Pressing the Hint key while you
are in the middle of a King move will give you a hint and cancel the
King move.

If there is only one move available, SOL8C will make the move for
you, rather than forcing you to find it. SOL8C will continue to Auto-
move until multiple moves are available or the game is over. In
"terror" mode (-t flag, or default), these moves will be made non-stop
and very fast. In "slow" mode (-s flag), SOL8C highlights each Auto-
move and prompts you to press any key to execute the move.

KEY SUMMARY or "What was that again?"

STATISTICS or "What's with all the numbers?"

Statistics consist of four numbers that SOL8C generates and
displays from data saved in the SOL8C.SCR file. The displayed
statistics are as follows:

"Games" = total number of games played.
"Wins" = number of games won. Most players average 1 win in 10
games. If you're ahead of this, you're doing better than
average.
"Avg. Cards" = average number of cards still concealed when the
game ended. The lower this number, the better. The average
player is stuck with about 6 cards.
"Avg. Moves" = average number of moves made in all games. The
higher this number, the better. Most players run about 30
moves per game.

DEAL REJECTION or "Wait a minute! I can't win with that!"

If you select the deal rejection option '-r', you will have the
option of rejecting a layout after examining it, but before making any
move. Use the