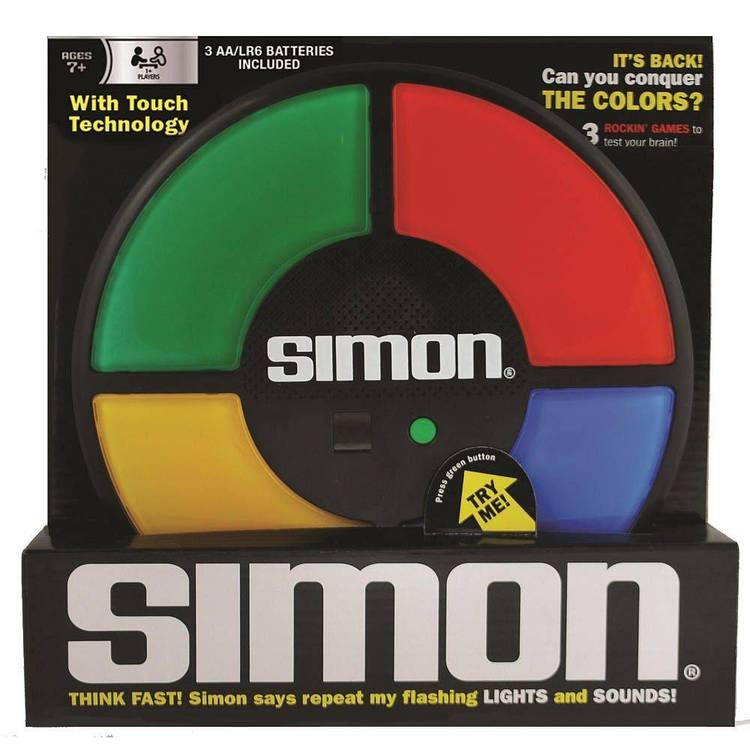 Contents of the MLOTRA.DOC file

Do you remember Simon?

Simon was a hand-held electronic game, introduced in the mid
1970's. In it, you were challenged to reproduce an ever-growing
sequence of flashing lights and musical tones, using four colored
buttons.

Its great success and simplicity spawned a huge number of
imitators, and was largely responsible for the hand-held electronic
game craze which continues to this day.

Otra (from the spanish "otra vez", or "one more time") is a
computerized memory game in the spirit of Simon.

Otra will run on any IBM PC/AT/XT/PS2 or close clone thereof, with
at least 100k of memory available after DOS is loaded.

A Microsoft-compatible mouse, can be used. (Remember to load your
mouse driver before loading Otra).

In Otra, you are shown a group of nine panels in a three by three
grouping, as shown in figure 1.

At the beginning of a round, one of these panels will flash
briefly, and, if the Sound Mode is on, a tone will play (See Sound
Mode in COMMANDS AND TOGGLES section of this file).

You must then repeat that "sequence" by pressing the correct key on
the numeric keypad of your keyboard. Figure 2 shows how the keys
correspond to the panels.

If you repeat the sequence correctly, the computer replays the
sequence, adding one more panel.

This continues, with you repeating an increasingly long sequence of
panels, until you make a mistake, or you complete the sequence.

Each round plays a little faster, and has a longer sequence of
panels to complete!

Points are accumulated for every correct panel, and bonus points
are given for completing a sequence. At the end of four rounds,
high score wins!

At the start of each turn, you are shown:

If you complete the entire sequence for the round (for example,
fifteen panels in round two), you are given bonus points.

So, make sure you are in DOS, and type "MLOTRA" (without the
quotes) and press return. Follow the prompts, and enjoy!

Otra can be played either using the keyboard or a Microsoft-
compatible mouse.

The legend (the last line on the screen) always contains a list
of keys that are valid at any point in the game, along with a
one-word description of their function. (See "COMMANDS" below)

When selecting the panels to replay in a sequence, clicking a
panel will select it.

This displays a scorecard of all players, to compare how
everyone is doing in relation to each other. The highest
score(s) are emphasized with a flashing arrow.

Use this key to end MLOtra before the game is over.

If you just want to play the game, and not look at some of the
"animation" (such as the moving panels), turning the Fast Mode
on will do it. NOTE: This does not cause the sequence of panels
to show any faster.

Displays information about the program and the author.

This gives you the ability to replay a sequence, but only once
per round.

This allows you to have numbers display in the panels instead
of the colored squares.

Defaults to "No", displaying colored blocks.

This allows you to get rid of the "Round" message, which some
folks find annoying.

This allows you to turn on and off the sounds produced by the
game, which some folks find annoying.

Displays the highest ten scores achieved on your machine. (This
information is stored in the file MLOTRA.SCR. To clear the top
ten, delete the file.)

In the section above, several options are referred to as "toggles".
This simply means that they can be in a "Yes" or "No" state.

(Note that the state of these toggles can be determined by looking
at the legend appearing at the bottom of your screen. If the
toggle description there begins with a capital letter, the toggle
is in a "Yes" state. For example, if a legend reads "Sound fast",
the sound toggle is set to "yes", and the fast toggle is set to
"no".)


Each of them has a "default", which is the state (either yes or no)
in which they start out when Otra begins.

Any toggle can be flipped to the opposite of its default (Fast Mode
= "Yes", for example) by keying the toggle's letter following the
program name (MLOTRA) when you start up the game.

So, if you wanted to set "Round Prompt" to No, and Numbered Panels
Mode to "Yes" (the opposites of their defaults), at DOS you would
key:

...without the quotes, followed by the Return key. Be careful that
you leave a space between MLOTRA and the toggle(s), or DOS won't
recognize what you are trying to do.

If you are running a composite monitor on a color graphics card,
and the colors in MLOtra are hard to discern, keying "MLOTRA B"
at the DOS prompt will make MLOtra run in Black And White Mode.

If you have your mouse driver installed, but do not want to use
the mouse during MLOtra, keying "MLOTRA M" at the DOS prompt
will cause MLOtra to ignore the mouse.

If you run the program without this parameter, you can still
use the keyboard. Using this parameter simply keeps the mouse
cursor from being displayed.

If the mouse driver is not installed, this parameter has no
effect.

Defaults to "Yes" if mouse driver detected, "No" otherwise.

Released only to a few beta testers.

Changed number of panels per round.

Thanks to all those folks who wrote nice letters and left great BBS
messages in response to my other games.

Thanks to Jay "Beta Test" Graham, for his input.

Thanks to Reed Harding for his spelling lesson!

A tip o' the hat as always to the officers and members of MicroLink
PCUG for the encouragement and support they always give my PC
endeavors.

Thanks to Eagle Performance Software, whose Shareware product
"QWIK" allows for some blazingly fast screenwrites in Turbo Pascal
and Turbo C.


ALSO BY THE AUTHOR

MicroLink Shut The Box - The traditional board game

Please include the version number of Otra in correspondence.

Tell them Otra sent you!