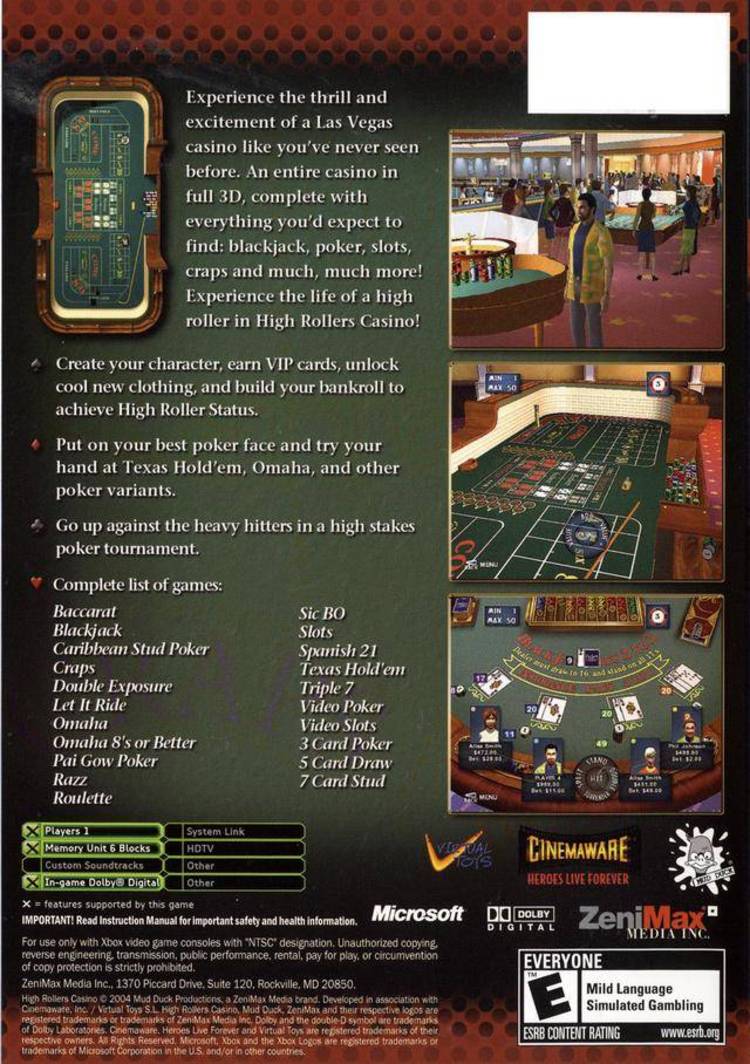 Contents of the MLSHUT.DOC file

From coins covering numbers scratched into the deck of a fishing
boat to the high-tech glitz of the TV game show High Rollers, Shut
The Box in its many guises has been around since the 18th century,
when it is thought to have been invented by fishermen in the
Channel Islands.

Its simplicity (very young children easily understand and enjoy
it), coupled with the fun of trying to "beat the odds" have made it
an old standard, especially in the British Isles, where it remains
a popular pub game to this day.

Shut The Box will run on any IBM PC/AT/XT/PS2 or close clone
thereof, with at least 64k of memory.

A Microsoft-compatible mouse, can be used. (Remember to load your
mouse driver before loading Shut The Box).

All options which those 18th century fishermen did just fine
without, but I thought added to the fun!

In this version of Shut The Box, players alternate turns trying to
get the highest score possible shutting numbered doors matching
rolled dice.

At the beginning of play, panels ("doors") number 1 through 9 are
displayed on the screen, in an "up" position (see Figure 1).

The player then rolls two dice, and closes any combination of doors
whose numbers total that of the dice. A player's turn ends when a
number is rolled which cannot be matched by any total of the
remaining open doors.

For example: A player's first roll is a six and a one, totaling
seven. The player may shut either the door numbered seven, or the
six and one, or the five and two, or the three and four, or the
one, two, and four.

In our example, the player chooses to shut (pull down) the two and
the five, leaving the board as you see in Figure 2.

On the next roll, the player rolls an eleven. The player can now
shut the eight and three, or seven and four. The 9-2 is no longer
valid because the two has already been closed. (Likewise, the 6-5
combination cannot be used).

A player's turn ends when all the doors have been shut, or until no
door (or combination of doors) can be shut which total up to the
sum of both dice. At this point the total of the numbers on the
doors which have been shut are added to the player's score, plus an
additional bonus of five points if all doors were shut.

All doors are then reopened, and the game passes to the next
player.

After each player has played five turns, the player with the high
score is the winner!

At the end of each player's turn, his points from that turn (the
numbers on the "shut" doors) are added to the display of his/her
score, in the box toward the bottom of the screen.

This "scorecard" contains the player's name, score, and a graph of
his/her score. The graph shows you how well you are doing against
a perfect score.

A perfect round gives a player 50 points:

With 5 rounds to a game, 250 points would be a perfect game. There
are 50 dots on the scorecard, and one is filled every five points.

So, make sure you are in DOS, and type "MLSHUT" (without the
quotes) and press return. Follow the prompts, and enjoy!

Shut The Box can be played either using the keyboard or a
Microsoft-compatible mouse.

The last line on the screen always contains a list of keys that
are valid at any point in the game, along with a one-word
description of their function. (See "COMMANDS" below)

When selecting the doors to shut, you can use either of two
keyboard methods:

1) Use the cursor left/right keys to point to a door and use
the cursor up/down keys to open or shut it, or

2) Use the numeric keys to select the number of the door to
open or shut.

When selecting the doors to open/shut after rolling the dice,
clicking an open door will close it, and clicking a closed door
will open it (provided that the door was closed after the last
roll of the dice).

This displays a scorecard of all players, to compare how
everyone is doing in relation to each other. The highest
score(s) are emphasized with a flashing arrow. Also, the two
sets of lines jutting into the box from above and below show the
range of scores currently in the TopTen scores file. The score
is "graphed" as in the single-player scorecard.

Use this key to end MLShut before the game is over.

This allows you to get rid of the "Press return to roll"
message, which some folks find annoying.

This allows you to put MLShut into Demo Mode, in which the
computer plays for all players.

Defaults to "No", allowing human play.

If you just want to play the game, and not look at some of the
"animation" (such as the rolling dice), turning the Fast Mode on
will do it.

Allows you to select between dice with pips (dots) on them, or
with numerals on them.

Defaults to "Yes", showing the dots.

Displays the highest ten scores achieved on your machine. (This
information is stored in the file MLSHUT.SCR. To clear the top
ten, delete the file.)

If you want Shut The Box to notify players when they roll a
combination of dice which they can't use, specify this toggle.

In the section above, several options are referred to as "toggles".

This simply means that they can be in a "Yes" or "No" state. And
each of them has a "default", which is the state (either yes or no)
in which they start out when Shut The Box begins.

Any toggle can be flipped to the opposite of its default (Fast Mode
= "Yes", for example) by keying the toggle's letter following the
program name (MLSHUT) when you start up the game.

So, if you wanted to set "Roll Prompt" to No, and Pips Mode to "No"
(the opposites of their defaults), at DOS you would key:

...without the quotes, followed by the Return key. Be careful that
you leave a space between MLSHUT and the toggle(s), or DOS won't
recognize what you are trying to do.

If you are running a composite monitor on a color graphics card,
and the colors in MLShut are hard to discern, keying "MLSHUT B"
at the DOS prompt will make MLShut run in Black And White Mode.

Thanks for the dozens and dozens of very nice letters and messages
I got (and still get) in response to my last game, MLYaht. The
positive response encouraged me to turn this one loose on the
world...

I'd like to thank my wife Cindy and my daughters Rosamund and
Genevieve for their tireless beta testing, and accurate
descriptions (such as "ooooh!" and "blech!") of what they liked
(and didn't like) about it.

Also many thanks to Greg Powers, whose comment "You know, I HATE
games that do that!" led to a major change in the scoring system
used.

A tip o' the hat as always to the gang at MicroLink (Bob Rodrigue,
Jay Graham and David Storrs especially) for the encouragement and
support they always give my PC endeavors.

Thanks to Eagle Performance Software, whose Shareware product
"QWIK" allows for some blazingly fast screenwrites in Turbo Pascal.
(For a demonstration on just HOW fast, start MLShut with both Demo
and Fast modes set to "Yes", and hold on to your socks...)
Programmers interested should contact Eagle at:

And, while I'm at it, thank you Phillipe Kahn!

Please include the verion number of Shut The Box in correspondence.

Tell them Shut The Box sent you!