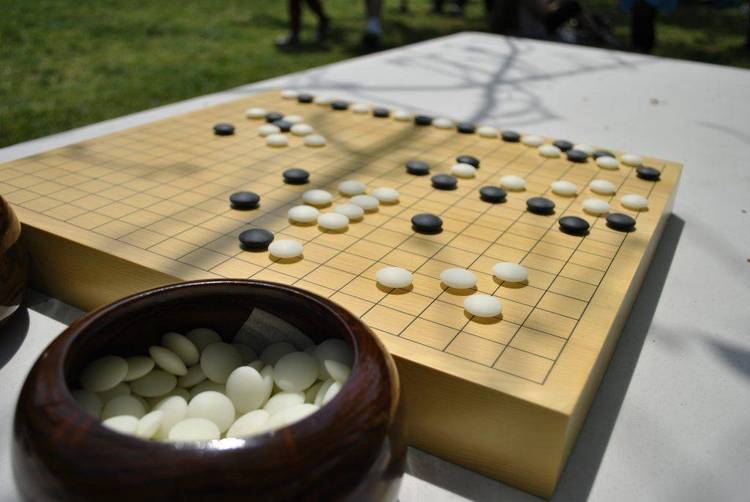 Contents of the SHOGI.DOC file

This is the most popular strategy game of Japan. Shogi has many
similarities to English Chess. Both are descended from third century
chess-like games which developed in China and India. Shogi is the
most highly developed game of the chess family. Much more dynamic and
exciting than its Western English counterpart. The main reason for
this is the move called the "DROP" move. When a player captures an
enemy piece this piece becomes his and may be droppped into play
anytime and nearly anywhere later in the game. This ingenious rule
greatly increases the number of possible moves players have to choose
from.

The object is the same as Western Chess. Capture of the King is the
whole game. Same as in chess the King must be "Checkmated" or
cornered. When a King cannot avoid being captured on the next move it
is "Checkmated". Computer Shogi has one distinct advantage to an
actual shogi tabletop board; A computer can keep track of which pieces
belong to which player and change the colors accordingly! With a REAL
Shogi tabletop board the pieces must be all the same color so they can
be "Pointed" in either direction as the ownership changes with the
DROP rule.

Pieces move very simply. Pieces are generally less powerful than the
Western Chess pieces are overall. They move as follows:

King: can move one square in any direction (horizontally, vertically
or diagonally)

Rook: can move any number of squares horizontally or vertically
without jumping over any pieces.

Bishop: can move any number of squares diagonally without jumping
over other pieces.

Gold General: can move one square horizontally or vertically or one
square diagonally forward.

Silver General: can move one square diagonally or one square
vertically forward.

Lance: can move any number of squares vertically forward without
jumping over other pieces.

Knight: can move by direct jump even if other pieces are in its path.
It moves to either of the two squares that can be reached by making an
L-shape move which is two squares forward and one square horizontally.

Pawn: can only move one square vertically forward.

The promoted Pawn, Lance, Knight and Silver all move exactly as a GOLD
would move. When they are captured of course they revert to their
original rank again.

The Promoted ROOK gains the ability to move one space diagonally in
any direction.

The Promoted BISHOP gains the ability to move one space Horizontally
or Vertically.


The computerized version of Shogi has (as of release 1.60) currently
some inherent limitations. The Most significant is the fact that I've
still got to make it know when you have accomplished Checkmate. This
not only requires a great deal more programming but I have instead
spent my time making it playable. When you load the game you have two
optional switches available. /C and /S will force CGA mode and the /S
will default the Sound to OFF. The program will try to determine if
you have an EGA monitor and also if it is currently set to 43 line
mode or 25 line mode. I recommend the EGA set to 25 line mode before
loading Shogi. You should also have your Mouse driver already loaded
prior to running it but you knew that already didn't you? The game has no
provisions whatsoever made for playing without a MOUSE (sorry all you
keyboard fanatics but I LIVE to use a mouse on my computers!!)

One little known rule is the Impasse rule which is a result of the
fact that most pieces in Shogi have the bulk of their firepower to the
Front facing side. It reads: If both players are able to advance
their Kings to the promotion zone, it can become nearly impossible for
the other player to force a checkmate, therefore, if it becomes clear
that neither player can get checkmate and all players pieces are safe
from capture (not in obvious jeopardy) then the players should count
up the values of their pieces. 5 points for each Bishop and Rook and
1 point for all other pieces except the King which is 0 points. If
either player has under 24 points he loses. If both players have 24
points or more then it is a draw. In Hand pieces are also counted.

Captures: Captured pieces are NOT out of the game! They will remain
on the bottom of the screen and may be selected and dropped again on
a future turn by the new owning player. Instead of moving a piece
that is already on the board on your turn a player may drop or
re-enter a piece that he has captured previously so that like other
pieces in the game he will have an added soldier to his army.

-Pieces may only drop on empty squares

-A Pawn may not be dropped if the resulting position would be
CHECKMATE for the opponent. The program does not yet prevent this error!

-No piece may drop to a square from which it could never move. This
translates to mean a knight may not drop on either of the last two
rows because it could not move legally (to effect a promotion).
Likewise the Lance and Pawn may not drop in the very last row.

-All pieces drop in their UNPromoted form even if they were promoted
prior to their capture. When they are captured they immediately
revert to their original raw form.

-Note that pawns may be dropped in the first or second row behind
where they would start the game out (A spot which they otherwise
could never reach.)

Promotion:
The Three rows furthest away from each player (inside which the enemy
pieces setup at the onset) are the promotion ZONE. Promotion occurs
at the end of a move. It is always optional except in cases where the
piece would never be able to move again as described above with the
Knight, Pawn and Lance reaching the end of the board. Kings and Golds
cannot promote. These are all checked for by the program and optional
promotions are promted for your intent.

-Pieces dropped in the promotion Zone STILL drop in the unpromoted
state.

-Any move which BEGINS or ENDS or BOTH BEGINS AND ENDS within the
promotion zone allows the unpromoted piece the chance to promote.
If a Bishop for instance moves Back from the 7th row to the 6th
row it may promote if it was dropped in the 7th row or had previously
moved to the 7th row and for some odd reason had elected NOT to
promote at that time.

The Program:
I've included a verify for CHECK. It will prevent you from making a
move which would leave your King in Check. Currently it does not KNOW
intuitively when you have been checkmated. If you do not know for
sure it will become obvious because the program will not allow you to
MOVE ANY of your pieces.
The program has a generic help screen summary chart of the moves.
Additionally I've added some nifty lil screens which pop up when you
select one of your pieces to move and THEN click on HELP. It will
describe the piece you selected and its movement. There are an
assortment of Hi-Resolution EGA mouse cursors available to the EGA/VGA
owners. Colors may be changed but I recommend the original colors
with one change being perhaps to the Green pieces changed to Purple
and the Cursor changed maybe to Yellow. Otherwise the Character
graphics quality of the Board and Pieces are difficult to get the
proper contrast and readability with.

I've added a new LOAD game and SAVE game feature. This currently
might allow very easy play by mail type games where you could
File-Mail a saved game back and forth between two people easily.
I've got a play-by-modem option in the works too!

Improvements are scheduled if there is some
interest in this program and others like it. I'm open to suggestions
at this point on enhancements, ideas and suggested additional features.
Mail your Registrations to:
$10 (Registered user to be on future releases mailing list) or
$20 (Fully Registered - Free delivery of Program Updates & Mailing List):

Source Code is available for you programmers out there for $100.
This is my 1st SHAREWARE attempt to distribute one of my toys of this sort.
I'm testing the shareware water before just handing my creations to the
public only to find out they were enjoyed without so much as a thank you
for my time spent tinkering. Ultimately if we fail to support such authors
we all suffer from the resulting boredom and stale creative atmosphere of
the Sharewareless world we are helping to create. Considering how most
computer users tend to like chess, I'm hoping this chessboard strikes a
nerve in all of you just as it did motivate me to continue working on it.
We enjoy playing it at my house and I hope you get an equal amount of
enjoyment from it too!
Ray