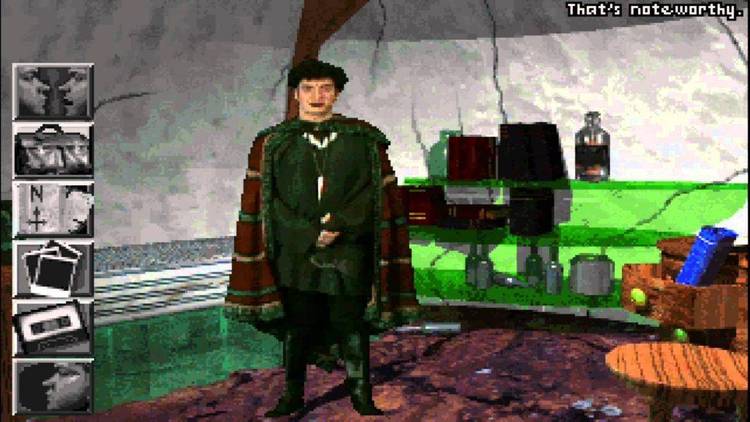 Complete Walk-Through
for Return to Zork!

Contents of the RTZSOLVE.TXT file

Solve written by Remo Williams and the Mad Butcher

NOTE: There are no compass directions until you are in a maze. In cases
where you need to go to a specific location, the path to get there will
be noted by either forward, left, right, or back.

Go into Chuckle's Comedy Club.
Once Cliff tells you to "make him laugh" use your tape recorder and play
back the jokes that each of the 4 people told you.
If you followed this solve religiously, the number of the recordings are as
follows:

Put the disc pieces in the trencher, then push the RED button.

You now have the Flying Disc of Frobozz.
Pick up EVERYTHING you see here, and then use the map to go directly to
the Cliffs of Depression.
From there, do an about face, and go left.
You should be at the Wall of Illusion, previously unpassable.
Throw the Frobozz disk at the Wall of Illusion, and go forward to the
Citadel of Zork.
Take the bow from your inventory, and click on the arrows.
Shoot an arrow at the hand, and the Citadel's gate will open.
When you reach the Orc Leader, drink the invisibilty potion that you mixed
in the flask.
When it says the Orc Guard can still sense your presence, play the recording
of Alexis (the poodle) he will run away.
Go forward to the Citadel Bridge.

Now, start tossing EVERYTHING at the Citadel Bridge (into the fire.)
Once you have thrown enough objects into the fire, the bridge will be safe
to cross. (You will see a message saying so)
Cross the bridge.
You must now play Survivor against Morphius for it all.
Here is a pattern which will always work, as long as you pass your move if
Canuk is occupying the next space you need to go to.

Stand back and watch the ending!
(It's pretty sleazy)