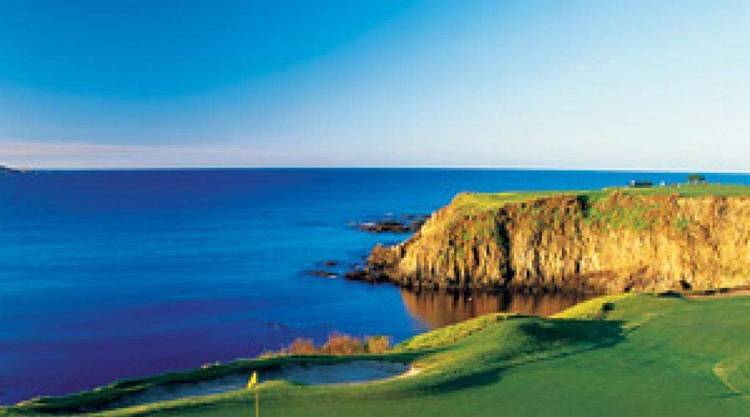 Contents of the PEBBLESC.TXT file

This is the US Open version of the Pebble Beach golf course. I
painstakingly created the fairways according to the actual
specifications used in the 1992 Open. Unfortunately, I had to
make a choice between heavy rough and out of bounds, both of
which existed in the Open. I chose to use the heavy rough, as it
was such a major factor.

This course is very difficult. It was also the most difficult
course to design, as the design program weakness are very
apparent on this type of course. I felt it was important to
create the cliffs as close to the dramatic way they look as I
could. Unfortunately, the program does not handle huge elevation
shifts real well and you will notice some things you may think
are mistakes. They are problems with the program. First and
foremost, you may sometimes see a piece of an object out in the
fairway or someplace it shouldn't be....the mini-moses effect. I
tried to minimize it, but made the decision to leave it in,
hoping that Ned Martin will eventually fix the bug. I felt that
I would have had to compromise too much along the cliffs if I
wanted to eliminate mini-moses, meaning I wouldn't have been able
to include many objects there. Another problem with elevations
is evident along the water. You will notice sometimes that the
water doesn't look quite right, almost like it is a tidal wave.
That is a problem with the program as well. It used to be a
green horizon line cutting across the water. Now its wierd tidal
waves, which all in all is preferable to the green line.

Probably the most frustrating deficiency in the design program
becomes evident on a course like Pebble. If you are on the green
and doing a reverse angle, it doesn't see back all that far. So
as a result, some dramatic reverse angle views are lost. For
example, if you are on the 8th green and look back toward the
cliff, you will sometimes just see part of the cliff, sometimes
none of it, and sometimes it will actually look like its ripped.
Step off the green and do the same view and you will see the
whole cliff.

I hope you enjoy the course. You may also wish to download and
try Bob Polin's version of Pebble, which is outstanding. Mine is
at a different time of day and uses different objects and some
subtle other differences in layout. Like me, you might choose to
keep both versions.

I do ask that you not alter my course and then upload it
anywhere. Obviously for your own use, you can do whatever you
want. I also do not authorize this work to be used in any
freeware catalogues. There should never be a charge for this
course by anyone or anywhere.

Understand this is just my interpretation of Pebble Beach. I am
in no way connected with them or with Accolade. If you like my
course, you may like my other efforts, which presently include
Banff Springs (a Canadian Rockies course) and Spanish Bay
(another course right near Pebble Beach).

also on Prodigy in the Other Games...JNSE section.