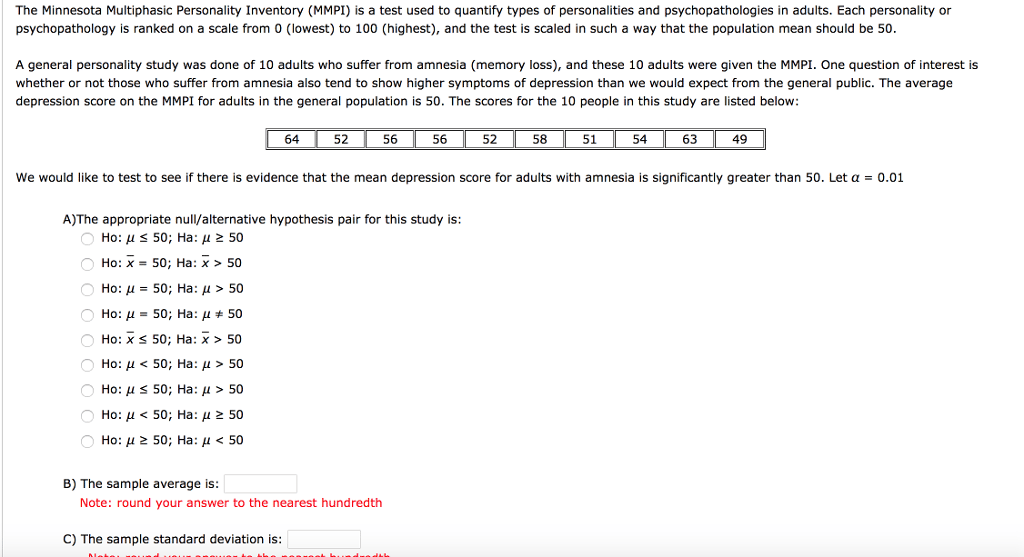 From the Psychotic Menace:


Some important notes from the Psychotic Menace:

Do not attempt to directly alter 'TEST.DAT'. It is in an ASCII format,
suitable for printing or viewing, but the file structure is somewhat
sensiteve to changes. If you feel you must change something, change
it in the 'TEST.TXT' and 'KEY.aaa' files in 'SOURCE.ZIP'. 'QDUMP.EXE' will
compile these files into text which may be re-directed to 'TEST.DAT'.

Just in case you get your hands on another version of the MMPI, or a
similarly structured test, 'SOURCE.ZIP' also contains full source code and
a make file. If you alter 'QDUMP.C', re-compile with the large memory
model. You will need Borland C++ 3.0 and TurboVision for C++ to compile
these files. The source is in hastily coded C++. Cut & Paste coding at its
worst.

To run the test, type MMPI.

During the normal operation of the test, it will write out two files:

BACKUP.ANS A backup of the last test in case of accidents.
REPORT.RPT A pretty form containing your test results.

Here is the contents of the MARBLE.TXT help source in a less strenuous
format:

The program source and most of its resources are 'Public Domain'.

The test its self is copyrighted by 'The Psychological Corporation', a
not-so-reputable company that supplies psychologists and other such quacks
with lots of nifty paraphenalia such as $4.00 Radio Shack multimeters with
a a stick on template for mesuring the electrical resistance of a
subject's tongue for $190.00.

Needless to say, various state and federal government agencies buy stuff
from them and pay through the nose.


This text is meant to simply provide an overview of the different
scales and their meaning. It is by no means a clinical treatment of the
MMPI nor should anyone treat this as a clinical tool in a real
psychological situation. The programmer has no psychological background or
training. The program is simply based on a copy of the MMPI (form R), the
instructions, the grading templates and an answer key. The abridged
information in this text was taken from 'Configural Interpretations of the
MMPI and CPI', by James T. Webb, Ph.D. and Kathleen M. McNamara, Ph.D.,
1981 Edition. Some text is paraphrazed, some is verbatim. If you are
intersted in this sort of thing I highly recommend you find a book about
the MMPI.


The MMPI has remained nearly unchanged since its initial publication in
1940. Some of the questions use phrases that have become relatively
out-moded. 'Cutting up', for example, after long hours of thought,
consideration and reflection could either mean fighting or making jokes.
It has been used in both senses since 1940. 'Drop the Handkerchief'
probably refers to something some people may only have seen in a Warner
Bros. cartoon or a very old movie. In many cases, if a lady were to drop a
handkerchief today, someone would be more likely to accuse her of
littering than to give it back to her, and someone recognizing this
gesture may well direct her to a place where she could talk to someone
calmly, look at colorful blotches and take the MMPI. Chivalry may indeed
be dead. The Psychological Corporation owns the copyright to the test and
they regularly scramble around the questions so that whomever subscribes
to it must buy new answer sheets, booklets and keys every few years. This
is the main update that has been made to the test over time since the cost
involved in validating a new test is prohibitive and making a profit is
always the most important thing for any business.


The MMPI is based on research by the University of Minnesota. This
copyrighted material has not been licensed. Many thousands of hours of
research by bored Minnesotan college students have gone into making the
MMPI almost 60% accurate (over 40% inaccurate). The fact that many
civilian and government organizations use this test as a cheap and
convenient means to ruin a person's life (ie 'He scored a ninety on scale
x so he's unsuitable for employment due to 'psychological reasons'; flag
his records with this so nobody else we know will employ him.) gave the
programmer the impetus to do this at all.


Most of the problems caused by the test are caused by an overly narrow
interpretation of its results. Many simply look directly at the lines at
70 and 30 then note any field that meets or crosses these lines. If you
have a lot of areas that are close or over, you're crazy. If all of the
areas are near the middle of the lines, you're sane and reliable. This
program can be used a bit like 'Cliff Notes' for studying to keep your
scores near the center. An even better application is general
entertainment. It's usually a hit at most user's group meetings. The data
files and program most likely slipped onto the public domain at one of
these meetings so I'll have to plead the fifth.


The various codes you see on the graph and list of scores:

? 'Question'- this is not a scale, and is not included in the program.
In the test, this number represents the number of unanswered questions.
Since all questions must be answered in the program, this scale is
rendered meaningless. Large numbers of unanswered questions either
invalidates the test or indicates error, obstinance or very confused (even
pathological) thinking on the part of the testee. This is normally
interpreted as the testee being an ass-hole and not being particularly
cooperative.


L 'Lie' (15 items)- The L scale is composed of questions that someone
who may attempt to give an overly perfect view of themselves may answer.
One is, 'I do not always tell the truth'. A false answer to this would
increase the score in this area since almost everyone lies some time.


F 'Frequency' (64 items)- The F scale is made up items that were
answered the same way by 90% of the people polled. Very high F scales
indicate error, failure of the examinee to understand questions, or
deliberately selecting random answers. T scores above 80 usually indicate
an invalid test. It may also indicate someone who is faking and trying to
look like he's insane. T scores 65-80 indicate markedly unconventional
thinking, and appears in sullen rebellious or antisocial personalities. T
scores <55 indicate the person is sincere, calm, dependant, honest,
conventional, simple, etc.

Scale 1 (Hs- 33 items) Hs = Hypochondriasis. High scores (T>=65) are
pessimistic, immature, stubborn, whiny, complaining pain in the asses.
Relatively low scorers tend to be alert, capable and responsible,
conscientious and maybe a bit moralistic. Very low scale (T<=40) indicate
people who don't tend to care about themselves or who feel inferior to
others.


Scale 4 (Pd- 50 items) Pd = Psychopathic Deviant. High 4 (T>70) people
tend to be angry, rebellious, show disregard for the consequences of their
actions, impulsiveness, poor social judgement and inability to plan ahead
or see themselves as others see them. Often heavy drinking, poor work and
marital adjustment is seen. Moderate elevations (T= 60-70) are common
among teen-agers. Low scores (T<50) tend to be passive, dependant, and
over- identify with social status. Frequently not very sexually aggresive,
but affectionate and serious.


Scale 5 (Mf- 60 items) Mf = Masculinity-Femininity. An elevation on
scale 5 is NEVER in its self a strong indication of homosexuality.
Moreover, homosexuals who wish to conceal their inversions are able to do
so with relative ease as far is this scale is concerned. This scale is
approximately the same between males and females, the female scale simply
being inverse of the male scale. (ie A high male score should reflect as a
low female score). -High 5 males generally tend to reflect sophistication
and aesthetic interests. -High 5 females tend to be vigorous, aggressive,
dominating and competitive. -Low 5 males tend to be easygoing,
adventurous, independant and aggressive. -Low 5 females tend to be
passive, submissive, modest, yielding and demure.


Scale 6 (Pa- 40 items) Pa = Paranoia. High scorers in this area (T>80)
almost always indicates paranoid people who suspicious and brooding,
harboring grudges, and feeling in some way that they're not getting what's
coming to them. Elevated scorers (T=60-75) tend to be overly sensitive to
others and take criticism more seriously than others. Low scores (T<40)
tend to be stubborn, evasive, and wary. They may feel that dire
consequences will fall should they reveal themselves in any way.


Scale 8 (Sc- 78 items) Sc = Schizophrenia. Caution should be used in
interpreting this scale- its elevation does not necessarily show that
someone is schizophrenic. It deals more with alienation, isolation,
bizarre feelings and general dissatisfaction. High 8 people almost always
feel alienated, misunderstood and not a part of the general social
environment. They have fundamental and disturbing questions about their
own place in this world and are confused as to how go about being a part
of it. Many feel they lack something basic that is the key to successful
relations with others. Low 8 people tend to be compliant and overly
accepting of authority. They tend to have a very practicle orientation,
and are usually controlled and restrained, but friendly and adaptable.


Scale 9 (Ma- 46 items) Ma = Hypomania. High scorers in this are tend to
be energetic, expansive, generally outgoing and uninhibited. They tend to
be easily offended and may seem to be hyperactive. T>70 suggests
maladaptive hyperactivity, grandiosity, verbosity and irritablility. Low
scorers (T<45) show a low energy level, listlessness and apathy.
Typically, they find it hard to get out of bed in the morning.


Scale 0 (Si- 70 items) Si = Social introversion. High scorers (T>65)
tend to be withdrawn, aloof, and anxious in contact with people. Elevated
scores shows a lack of social support for a person. Low scorers (T<45)
tend to be warm, active people who are active, assertive and involved in
groups. A low score in this area indicates a social competence and
adaptiveness.


Thank you to all the people who tolerated my ravings for a while.
Thank you to the individual who loaned me the test.