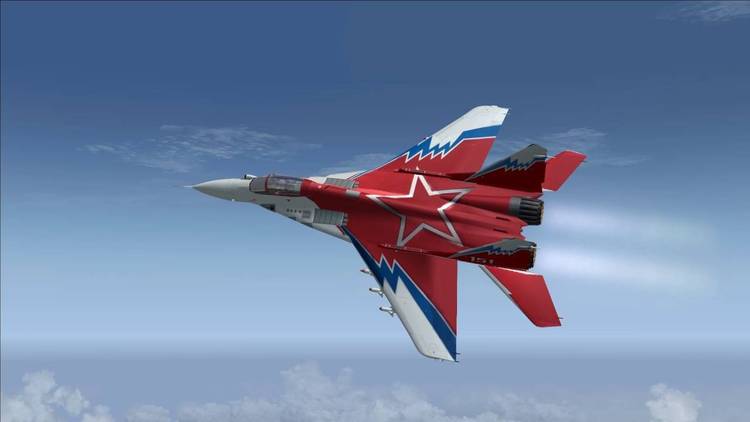 Contents of the MIG-29.DOC file

FILES IN THIS ARCHIVE:

HOW TO USE THE FILES:

The airplane in this file requires the use of Chuck Yeager's
Advanced Flight Trainer (formerly known as Advanced Flight Simulator)
from Electronic Arts. To use the plane, simply put it on the same
directory as AFT. AFT will find it and place it in the "planes" menu.

Chuck Yeager's Advanced Flight Trainer is a flight simulation
game available from Electronic Arts. This is one of the best values in
entertainment software. AFT is the most realistic flight simulation yet.
If you don't have this game, and if you are a Flight Simulator freakie or a
Jet jockey, then go out and buy this game!

The MiG-29 Fulcrum, the successor to the MiG-21 Fishbed, was
developed to compete with the F-16A and the F/A-18. It is desinged for
air superioirty close to ground battle and in defense of Warsaw Pact airspace.
The Fulcrum is equipped with special flaps on the jet intakes that allow it
to take off from unprepared runways. Like its larger partner the Su-27
"Flanker", it has many features resembling those found in American fighters.
These aircraft mark the Soviet Air Force's transition to a new generation of
far more capable combat aircraft.

If you create any new airplanes, please upload them so they can be
shared. I love to get new airplanes to use. The only things I used to
create my planes was a book with statisitcs on the plane, what I thought
the plane could do, and some guesswork. Please leave me comments on what you
think should be improved, anything you have discovered, or your opinion.
Your comments will encourage me to post more airplanes, stunts, and
airplane races in the future.

AFT keeps its airplane stats in small ASCII files called *.fly.
These files include number values for all of the flight characteristics of
the aircraft. Using these numbers, it is concieveably possible to simulate
any conventional aircraft! A complete description of how to program new
planes is avilable in a file from Electronic Arts. The file is AIRPLANE.ARC
by Paul Grace.

If you have any comments or questions, I can be contaced at the
following address.

All of the files in this archive are intended for non-commercial,
public domain use, and may be used, copied, and distributed subject to this
licence. This program is supplied "as is" and without any warranties,
express or implied, including fitness or suitability for a particular
purpose. The files in this archive may not be sold.

An Illustrated Guide to Future Fighters by Bill Gunston