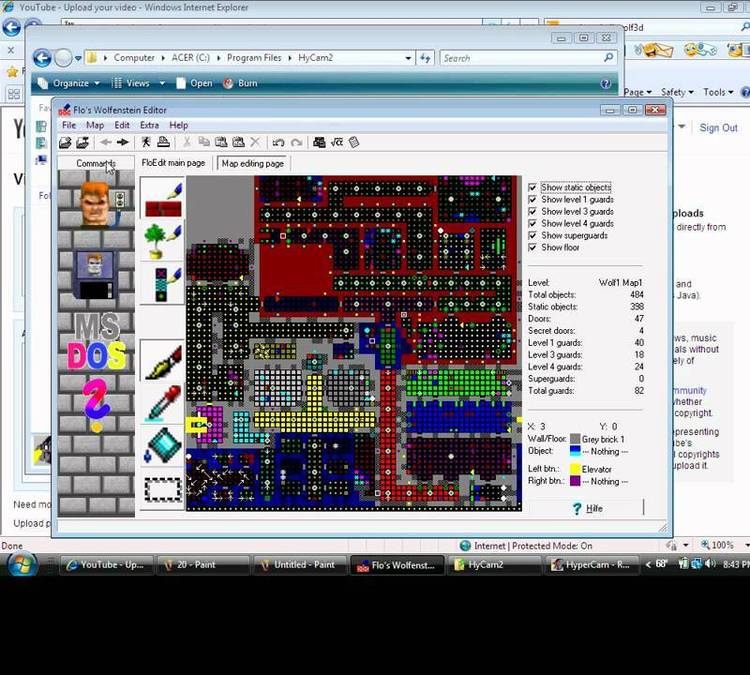 - Read/Write filenames may now be specified.

- Fixed file opening logic and error reporting to minimize problems getting
MapEdit working in all versions of Wolfenstein. Won't report errors
when backup copies of game maps are found in the same directory.

- Will work with mapdata and objdata files using DEF, WL1, WL6 and SOD
extensions. Will try to open *.DEF files 1'st. If you want MapEdit
to use the WL1, WL6 or SOD files remove or rename the *.DEF files.


- An alternate set of map and object definition files have been included
(see ALT_DEF.ZIP). Try them, you may like them! They are also sorted
by type and by most used.

- Modified LEGEND display to only show those map or object elements
that are specified in the mapdata and objdata files. Also, the legend
order is the same as the file order. Now you can sort the items as
you please. (i.e. You can place your most used items near the top,
and the least used at the bottom to reduce the necessary scrolling.)

- Allowed right mouse button to have it's own value.
- Allowed sepperate tracking of MAP and OBJ mode values for
the different mouse buttons.
- Holding down shift key while clicking on the map loads values.
- Spacebar toggles between MAP and OBJECT modes.
- Allowed PAGEUP and PAGEDOWN to scroll the legend display.
- Removed unused code for clarity.

- This release of MapEdit will display Help in the edit window (below the
map legend). You will be able to display Help or Bryan Baker's Stat.
display. For slow machines this allows you to turn off the statistics
calculations. You can then step fast through the levels and edit maps
with out a delay while the statistics are being calculated. You can
switch back to the statistics display when you want that information.

- You can copy, paste and exchange floor maps within an edit session.
You can move a floor if you decide you want it on a different level.

- You can write out and read in floors from different games. You
now can move your favorite creation in *.wl1 to *.wl6 and *.SOD.
See MAPEDIT.DOC for how this is implemented. You can now share your
creations with your friends. You can take floors created by a number
of people and merge them into one game. There can be a contest and
all of the best creations are put together to create a best-of game.

- When using the clear command you can select the floor value to fill
with. You can now fill with a selected wall value or floor value.

- This release of MapEdit will display in the edit window (below the
map legend), the following level statistics:

Number of Secret Doors
Number of Treasure and Extra Lives

This information can be very useful in designing levels. There are
some program limits that must not be exceeded. These limits are:

When these limits are exceeded, the text changes to red as a visual
warning.

Note that there are different Boss Guards in Spear of Destiny than
in Wolfenstein 3-D. Since the OBJDATA.DEF contains descriptions for
both sets, they are all counted and shown in the statistics. You must
be aware of the different Boss Guards that will be available in the
game for which you are designing levels.

- This release of MapEdit should work with all versions of the game,
including the three, six and Spear of Destiny (SOD) episode editions.

- The map files may become a lot larger after using MapEdit, even
if you do not alter any levels. This is because MapEdit does not
recompress the maps with the newer compression scheme used in
v1.1 of the game. This doesn't cause a problem when playing the
game, it just makes the map files larger.

- The MAPDATA.DEF file contains information about the new wall images
used in the 6-episode and SOD games. If you are editing the 1-episode
game, be careful not to select any of the newer wall images. The same
goes true in the 3 and 6-episode games, don't select SOD objects or walls.
You may want to create separate .DEF files, one set for each version of
the game. The Walls and objects used in SOD are indicated in the .DEF
files and will show up in mapedit.

- The OBJDATA.DEF file has been updated with all objects and walls.
You may want to change the descriptions found there.

- In SOD the objects past 00FE are accessible.

- A minor fix was added to completely clear the text area below the
map display when the mouse pointer is moved off of the map area.