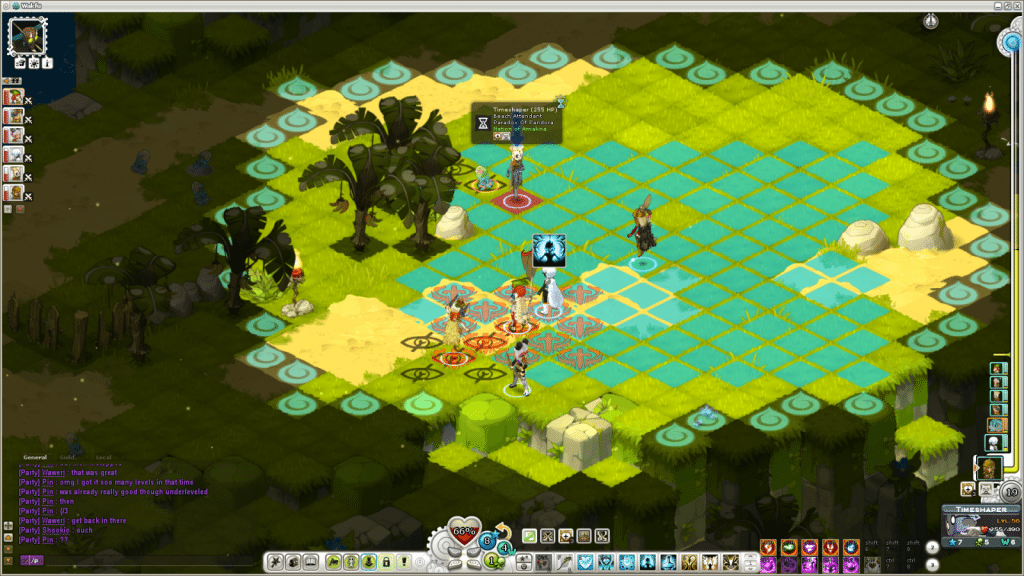 Contents of the READALL.TXT file


Other Games From Apogee Software Productions

This game won a national programming contest as "Best Game in Shareware". It
features 25 levels of rousing action, 16-color graphics and a library of 200+
sound effects. It's a unique combination of arcade, adventure and strategy.
This is Volume I of the original Kroz Trilogy.

"Kingdom of Kroz is the best of all." -- PC-SIG Directory Guide

"I've had this game a long time, and I still stay up late to play it."
-- Shareware Magazine
(Program of the Month)

"My computer is held hostage as my wife whips her way to level 25! You
really DID write an entertaining program, my check is enclosed for the
two sequels." -- John Rollinson, CA

CAVERNS OF KROZ & DUNGEONS OF KROZ $7.50 registration each

The two sequels to KINGDOM OF KROZ--more levels, more action, more fun.
CAVERNS OF KROZ has 40 new screens and DUNGEONS OF KROZ has 30 more. Both
have unique goals and puzzles. These two volumes complete the original
Kroz Trilogy.

All three original Kroz Trilogy games can be bought at once for just $20.

NOTE: Three new Kroz volumes have finally been completed, read below for
the Super Kroz Trilogy.

Our best adventure game requires an entire 360K disk! Has as many features as
even the best commercial adventure games, and then some. Like a 16-color
screen, ASCII graphics (that even work on non-graphic systems), 1000+ word
dictionary, over 160 game locations, 400+ sound effects, a "hint"
command, and more.

You begin on a remote mining planet with just your battered space ship and the
hope that one day you'll have a job that actually pays! After an amazing
discover you begin a trek that spans four planets, including a huge planetship.
All to save a civilization from utter extinction--from a star ready to explode!

In the Sept-Oct. 1989 issue of Shareware Magazine, Publisher Richard Peterson
rated Supernova among his list of must-have "software gems", which included
in all 35 programs. Supernova was the ONLY game on his list!

"Better than any adventure by Infocom." -- George Broussard, TX

BEYOND THE TITANIC $8 registration

It's a text adventure game that mixes elements of science fiction, action,
fantasy and rollicking adventure. The story begins with you standing aboard
the Titanic just seconds before the ship sinks! In this story of riveting
survival you'll discover a long forgotten undersea mystery, travel to the
Earth's future, fly a shuttle to a floating city and be chased by a slobbering,
three-armed creature--and that's just the believable part!

"...as sophisticated as the best commercial adventure games by Infocom."
-- Shareware Magazine
(Program of the Month)

"If you've played any of Infocom's famous text games you'll notice that
Beyond the Titanic is quite similar to Zork and Planetfall. And to add to
the game's realism, sound effects are used throughout."
-- Dave Cagle, Reviewer SW

"As a programmer, I'm amazed that this game understands full english sentences.
We've been working--unsuccessfully--on this area for a year now. Can we buy
your code?" -- Dr. Paul Short, AZ

"After you pick the cabinet's lock, how do I heal my broken arms? ...also, I
love this game, send me a list of other games you've made."
-- Edward DiGiovine, OH

"It's equal or better than most expensive adventure games. Great!"
-- PC-SIG Directory

T.V. Guide magazine called Star Trek "...the most popular TV series of all
time." Now we challenge your knowledge of the award winning show with a
series of 10 Star Trek trivia games. Each volume has 100 multiple choice
questions, and when you answer a question correctly you'll be rewarded with
a "Bonus Fact". Bonus Facts are additional tidbits that even further expand
your Star Trek knowledge.

What type of crystal is used to power the engines of the Enterprise? What
is Mr. Spock's first name? How fast is warp 2? What does the Prime
Directive prevent the crew of the Enterprise from doing?

Did you know that Dr. McCoy's medical instruments were actually modified
salt and pepper shakers. Or that it was Leonard Nemoy who developed the
idea of Mr. Spock's Vulcan nerve pinch (so as to make Spock less violent).
Or that the Enterprise is 947 feet long. Or that Joan Collins, Terri Garr,
and Ricardo Montalban all appeared in a Star Trek episode. Or that the
Enterprise was named by Captain James T. Kirks father!

It's all here in Trek Trivia. You'll also receive a secret code that lets
you answer each question automatically.

"The game moves swiftly and the challenge is great...The 100 true and false
and multiple choice questions are provocative. [The bonus facts will amaze]
even the most devout Trekker!" -- Shareware Magazine

"I like the way TREK TRIVIA is played like a game, you've done a fantastic
job with these programs. Keep up the good work." -- Steven Blackburn, TX

RETURN TO KROZ - Your quest for the "Crown of Kroz".
TEMPLE OF KROZ - A death defying adventure for the "Holy Grail".
THE FINAL CRUSADE OF KROZ - Will you discover the great mystery of Kroz?

They all have 16-color graphics (yes, 16 colors!) and a tremendous sound
effects library. In each game you must navigate through dangerous chambers,
solving puzzles and avoiding pitfalls. Collect gems, whips, chests, nuggets,
tablets, keys and scrolls to aid your progress. These game are as much
strategic as they are pure arcade fun.

All Kroz games are designed to work correctly on ANY computer system, regardless
of microprocessor type or speed. Although they are best played on a color
system, they do have an option to be played on a monochrome system!

(These games are too new to have user quotes.)

A new idea. We've taken the best programs submitted to us by outside game
authors and combined them into categories, 4 per disk. None of these games
have ever been released anywhere else before. They are not public domain, nor
are they shareware. They're originals, and for the minimal price, they're a
bargain, too. Currently, we have two FUN-PAKS:

* ROGUE RUNNER
* NIGHT BOMBER
* RAIDERS OF THE FORBIDDEN MINE
* THE THING


Apogee Software Productions is always looking for the best new software. If
you think you have a program or game that qualifies send it in to our
Review Dept. Send only completed projects please--bug free, too.

In the meantime have fun and good luck.

Secret Code: QWERTY
Reveal this code on your next order of $30 or more and receive a $5 discount!