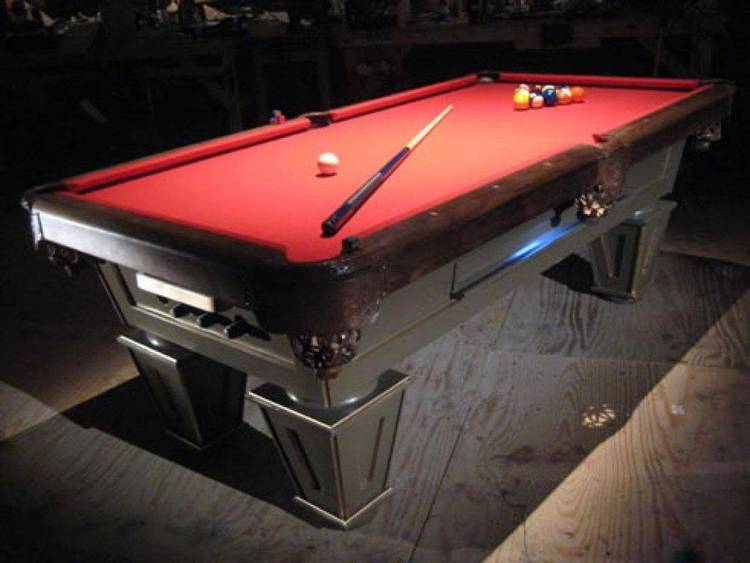 Contents of the POOL.TXT file

This program simulates a pool table with a standard rack of 15 numbered
balls and a cue ball. The player can manipulate a cue stick on the
screen to aim and shoot at balls on the table. The rules for the game
of eight-ball are implemented, to some extent, and the program will
take turns shooting at the balls when the player misses or makes an
illegal shot.

You may make copies of the file, JKPOOL3D.ARC, and give them to your
friends. Do not distribute the program in any other form or charge
any money. You may register your copy of the program and receive the
next update release by sending $10.00 to:


Source code is available for an additional $75.00.

So much for the mumbo-jumbo. Now for the fun stuff!


HOW TO PLAY THE GAME:

Type "POOL" at the DOS prompt. DOS will load POOL.EXE and the game
will begin. You will see a drawing of a pool table complete with balls,
pockets, a cue stick, a status line showing some information and the
words "Position cue ball and press ENTER." You may move the cue ball
anywhere behind the "kitchen line" with the arrow keys. Then press
the ENTER key.


Player: The status line shows whose turn it is . You are Player 1
- not a flattering name, but better than Player 2 which is the program.
Warning: Player 2 is a pretty good shooter.


Shoot for: The status line shows whether the current shooter is shooting
for STRIPES (nine-ball through fifteen-ball), SOLIDS (one through
seven), or OPEN (not decided yet).

Ball: Before shooting, you must "call your shot". That is, you must
specify a ball and a pocket into which you will make the called ball.
You may change the called ball by pressing "+" or "-". The cue stick
will aim at the called ball. You may then adjust the aim by pressing
the right or left arrow key. Pressing the left arrow causes the cue
stick to aim one degree to the right. This may seem backward at first,
but feels natural after a while since you aim a real cue stick by
moving the rear of the stick in a similar manner. Pressing the CONTROL
key and an arrow key adjusts the aim by one tenth of one degree. Pressing
the "4" or "6" key adjusts the aim by ten degrees.


Speed: This is how hard you are going to shoot the cue ball. It is
adjustable in powers of two from one to 256 by pressing the up and
down arrows.


Pocket: This is the pocket you intend to shoot the called ball into.
The status line only indicates "Side" or "Corner", but the actual
pocket is indicated on the drawing with a white "X" in the pocket.


Once you have called the ball and pocket and adjusted the aim and
speed, press the ENTER key to shoot the cue ball. Watch the screen
as the balls move on the drawing. Any balls that fall in the pockets
will move off the table. If you make your called shot you will have
another turn to shoot, indicated by "Player 1" under "Player" in the
status line. Otherwise, the program (Player 2) will take a turn.


Press the "F1" key anytime during the aiming process to get a list
of key functions on the screen.


Player 2 currently knows how to make straight shots as well as bank
shots and kick shots. Future releases will be able to make combinations
shots. The current version has a couple of bugs in the rules which
will be fixed in future releases. Player 2 will shoot at balls behind
the kitchen line after a scratch and does not consider the possibility
of scratching when choosing shots. This too will be fixed. Other suggestions
are welcome by mail or through Compuserve address 71641,2123.