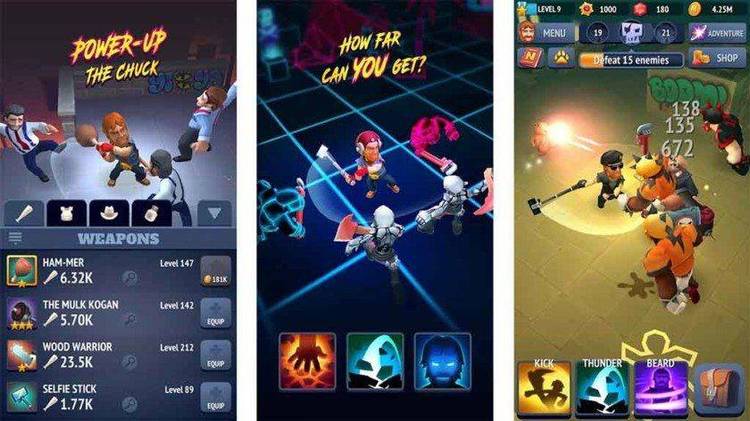 Contents of the HACKN.DOC file

Designed and Programmed By : Michael Fudge

This program is Shareware. What this means is that if you like
this program, and decide to keep it, you will donate a nominal charge
to the author of the program. In turn, you will be put on a mailing
list and be a registered user of the product. If you do not
register this product, then you must delete it or pass it on to
someone else. If you really enjoy this product, then send $3.00
to :

If You Send The money, You Will Be Kept informed of new updates
And other products I put out.
Note - Please do not alter or change the program or the contents
of this file in any way. If you have any feedback to give to me
send me a letter with your comments. Thank You.

INSTRUCTIONS FOR PLAYING THE GAME :


Strength - Strength plays an important role in HACKn'
SLASH because most of the game involves
combat. The higher a character's strength,
The greater his hit probability and net
damage per hit. A score in this area is a
must!

Dexterity - Dexterity measures a player's stealth and
agility in combat. The more dexterious a
character is in combat, the lower his/her
Armor Class and the better the chance for
the character to attack first or attack
twice in a row.

Charisma - Charisma is a measure of a character's
attractiveness and politeness. The greater
a character's charisma, the less the amount
of money he/she will have to pay for healing,
armor and weapons. Charisma is nice to have
when one has to pay for something!

Hit Points - These are like "Life Points." Hit points
are important to staying alive. When a
character's hit points are low, there
chance of living is slim.

Gold - In HACKn' SLASH gold is a must. Gold is needed
for buying weapons & armor, getting healed, and
wagering on a fight. Without enough gold under
your belt, you definitely won't last long.


ArmorClass - Armor Class measures your ability to defend
yourself in combat. Armor Class is measured
by the type of armor worn and the dexterity
of the player. A good armor class is always
helpful because it decreases the chance for
an opponent to hit you.

Wins - This number measures how many wins you have. The
greater the number of wins, the higher in level
you become.

To Hit Armor Class 0 - This is a number so the player of
the game has some sort of bearing
on how well his or her chance is
to hit a given opponent. The
lower this number, the better.

Level - Level is kind of like the power of a character.
The higher the level of a character, the greater
his or her power. The greater a character's
level, the more Hit Points he/she attains and
the lower the to hit Armor Class Zero.

Condition - This is the current condition of the
character. It is a direct measure of how
many Hit Points a character has left. When a
player's Condition reaches zero, the player
is dead and the game is over.

Weapon Name - The name of the weapon you currently own.

Armor Name - The name of the Armor you currently are
wearing.

*Note* - Notice that there is no intelligence in this
game. The prime reason for this is because a
character is only as smart as the person who
plays him or her!


Weapons and armor are important in the game because
one must use them to keep their player alive. When
starting the game, the player should always buy weapons
and armor before going into combat. You will not survive
long without weapons and armor. When first buying your
weapons and armor, make sure to leave some extra gold so
that you can wager before you fight. If you don't wager
any gold, your net winnings will be close to nothing.


Healing is a great service offered in this game.
Therefore, whenever you have the gold it would be wise
to heal yourself. But beware! Prepare to pay a steep
price!


This is the heart of the game. Here you will wager
an amount and then proceed to combat. In the first few
opponents, you probably won't make that much money from
fighting. Don't worry because that will change with the
more wins you accumulate.
When you are done wagering the screen will display
who you are about to fight and his rank. The lower the
opponent's rank, the better a fighter he is.


Parry - A parry is a attempt to block an opponent's
oncoming shot. A parry raises your defenses, but
decreases your chance to hit your opponent.

Dodge - This is a attempt to get out of the way. A Dodge
Decreases your chance of getting hit the best.
(i.e. lowers your Armor Class the most thus
making you difficult to hit) A Dodge, on
the other hand, is the worst to try to attack
with and only offers minimal damage even if you
were to hit the opponent.

Thrust - A thrust is a stab taken straight at a person.
Because of the quickness of a thrust it
increases your chance to hit slightly, but also
increases your chance of getting hit slightly.
Swing - A Swing is a forceful blow at an opponent. When
you swing at an opponent, you increase your
attack, but considerably lower your defenses. A
swing does extra damage because of it's powerful
and forceful nature.

Slash - A Slash is a quick swing at an opponent to catch
him off guard. A Swing increases your chances of
hitting an opponent the most. But, in turn, the
Slash lowers you defenses a little.


Blind Swing - The Blind Swing is probably the most
dangerous offensive move. It can only be
defined as a swing taken at a foe in rage.
Because of the chaotic nature of the Blind
Swing, it lowers your defenses the most.
Due to hit powerful nature of this form of
attack, it does the most damage and gives
the attacker a slight chance to hit.

Normal Blow - This is just a normal blow taken at an
opponent. It incurs no penalties or bonuses.

A Word Of Advice:


This program was designed with one thing in mind: A
Good Time. I hope that it serves you in this way. I have
noticed ( from frequent and lengthy game play ) that the game
is difficult at first. I designed it this way to be
challenging. Believe me, after a couple of games you get the
hang of how the system works. Also, after your player gets up
a level or two, It gets a LITTLE easier for a while.
( Although may I suggest not overestimating the computer.)
So, hang in there! And may the best of luck be yours.