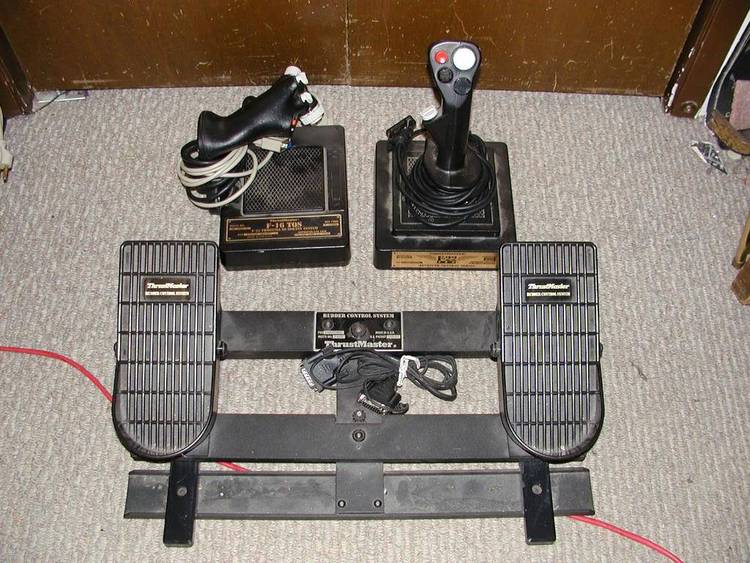 Contents of the READFS4A.TXT file

3. Switch to the C:\MARKII subdirectory and print the FLTSIM4A.ADV
file and study it in conjunction with this text file.

NOTE: ALL REFERENCES TO PRESSING A BUTTON ON THE WCS OR A BUTTON ON THE
FCS OR PFCS (OR THE "HAT" SWITCH POSITON) MEANS PRESS AND THEN RELEASE.
NEVER HOLD THEM PRESSED FOR LONG - THEY DO NOT AT THIS TIME REPEAT
KEYS!!!!!

Note: It would be a good idea, to use this series of files at first by
following the loading procedures and then entering FS4 and learning the
modes one mode at a time. For example, before following the loading
instructions below, simply print out the command matrix printed at the
end of this text file and then, follow the loading instructions and
after entering FS4, make sure the rocker is in the middle positition,
and try the Normal Flight Mode button functions and follow along in
the button function matrix as you press each button on the FCS/PFCS
and WCS II handle. The commands should activate what the matrix
indicates while in FS4 with the rocker switch ON THE MARK II HANDLE
in the middle position. If they don't, first try pressing the rocker
up and then return it to the middle position, selecting Mode 3 -
Normal Flight Mode again and try again. If they still don't do what
you expect, stop and think - what might you have done to make it not
work as expected. Remember, while flying FS4 you will ALWAYS
have the remapper active in one of the three modes with these files
loaded. You should never turn it off with the F12 (Remap ON/OFF key).

Practice with this stuff loaded. There are over 40 functions you can
perform from your WCS II and FCS or PFCS, in addition to analog throttle
control. This will take a little time to learn. You can add even more
functions if you wish. Just create another mode or three with the
remapper and you can have enough functions to completely befuddle yourself
in the midst of a cross country flight. 8)

Now, to get started using this series of files:
1. Print out the button function matrix below, and make sure you have a
print out of FLTSIM4A.ADV handy.

1. If you have not already downloaded the FLTSIM4A.ADV file, then switch to
the C:\MARKII subdirectory and type DFS4A. The rest of the process will
be automatic, just follow the instructions as they are presented to you.

2. If you have already downloaded the FLTSIM4A.ADV file, then switch to the
C:\REMAP subdirectory and type FS4RMPA - again read the instructions and
perform them just as they ask you to. It is always a good idea to start
from the dos prompt in whatever subdirectory you are in and make sure the
handle on the WCS II is all the way back and you have clicked on Button 1
on the WCS II handle until you see characters generated. If you don't see
characters, don't be alarmed, it may be that you have programmed some key
like F7, for example onto button 1 and F7 will not produce anything at the
DOS prompt even if you press it on the keyboard - it's a non native key. If
if doubt as to whether your WCS II or FCS or PFCS are actually generating
characters, use KEYTEST in the C:\MARKII subdirectory.

Note: BTN HU, HR, HD and HL if pressed and released by themselves all
operate trimming of the aircraft. If pressed after pressing the BTN UB,
the hat positions will operate one of eight view positions available
in FS4. Hat operates this way with modes 1, 2, and 3 on.

T* or T+ means first press this button to trigger a function on a button
marked with a * or +.