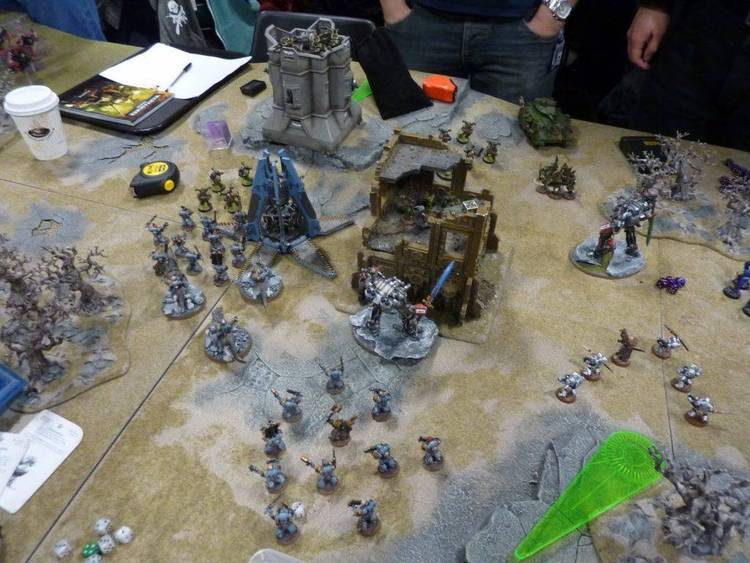 Contents of the FRAZZLE.DOC file

FRAZZLE! is a dice strategy game where the object is to be the first
player to reach 10,000 points. It may be played by any mix of up to
four human and/or computer opponents.

Players alternate turns rolling the dice and saving scoring
combinations. Dice that are saved on one roll may not be used again
on the next roll. If all six dice score points, they may all be used
again for the next roll and the turn score accumulates. A player may
continue to roll as long as he wishes to, or, until he fails to roll
at least one scoring die (called a "zonk"). If a player is zonked,
he forfeits his turn and loses his score for that turn.

Alternatively, you may choose to play a 30-turn solitaire game and see
how high you can score. The solitaire rules are the same as for the
regular game, including special 500+ point first-turn rule (see pg.5),
except the game does not end at 10,000 points, but continues on for 30
turns with the object being to achieve as high a final score as
possible.

Changes to this documentation from previous versions are denoted by a |
'|' character on the right side of the lines that contain additions or |
changes. This will allow veteran FRAZZLE! players to quickly scan |
this document and find all the newest goodies. |

Veteran FRAZZLE! players may notice that the v3.10 FRAZZLE.EXE file is |
over 60K smaller than in previous versions. About half of this is due |
to extensive reorganization of some of my library source code modules |
that enabled me to use Microsoft C's 'small' memory model. The rest |
comes as a result of a superb .EXE file compression utility from |
France called LZEXE v0.91. The result is a substantially smaller |
program that has more features and runs as well or better than its |
previous versions. |

*** |
*** FRAZZLE! DISTRIBUTION FILE |
*** |
|
The complete distribution file for FRAZZLE! v3.10 should contain the |
following files: |
|
FRAZZLE.EXE -- This is the FRAZZLE! executable file |
(40585 bytes, dated 07-12-90) |
|
FRAZZLE.DOC -- FRAZZLE! documention |
|
FRAZZLE.AD -- A one-page game description and registration |
order form |
|
SUPPORT.BBS -- Where to obtain the newest versions of FRAZZLE! |
and my other shareware programs. This is also |
where you can contact me with questions, |
comments, suggestions, and orders. |
|
My original FRAZZLE! distribution file is a PKZIP-created archive |
file named FRAZL310.ZIP. The unarchiving utility PKUNZIP is required |
to recreate the four original files from this archive. If you do not |
have PKUNZIP, you will need to obtain it from your favorite BBS. The |
current version of this utility should be contained in a file called |
"PKZ110.EXE". |

*** |
*** INSTALLING FRAZZLE! Page 3 |
*** |
|
You may run FRAZZLE! from your hard drive or from a floppy disk. To |
install FRAZZLE!, you need only copy the distribution file to the |
desired directory or sub-directory and enter the command, "PKUNZIP |
FRAZL310" to recreate the FRAZZLE! files. For example, if you have |
the disk containing the distribution file in floppy drive A: and you |
wish to install FRAZZLE! on your hard drive C: into a new directory |
called "frazzle", you should put the diskette into drive A: and issue |
the following commands: |
|
c: (make hard drive C: the current drive) |
cd \ (change to the root directory) |
md frazzle (create the new sub-directory "frazzle") |
cd frazzle (change to the new sub-directory) |
copy a:frazl300.zip (copy the distribution file from diskette) |
pkunzip frazl310 (recreate the FRAZZLE! files) |
|
NOTE: PKUNZIP must be in the current directory or in a directory that |
is accessible through your PATH environment variable. |
|
*** |
*** VERIFYING YOUR VERSION OF FRAZZLE! |
*** |
|
If you use the VALIDATE.COM utility to verify the integrity of |
executable files, it should produce the following output for |
FRAZZLE.EXE -- |
|
VALIDATE 0.3 Copyright 1988-89 by McAfee Associates. (408) 988-3832 |
|
File Name: frazzle.exe |
Size: 40,585 |
Date: 7-12-1990 |
File Authentication: |
Check Method 1 - EB1F |
Check Method 2 - 1905 |
|
If the FRAZZLE! distribution file you received or downloaded does not |
contain the four files listed above, if it is not named FRAZL310.ZIP, |
or if VALIDATE does not produce the results listed above when run on |
FRAZZLE.EXE, please contact me via a bulletin board or phone number |
given in the "FRAZZLE! Support and Newest Versions" section of this |
document. Let me know the details of the discrepancy and where you |
obtained the incorrect distribution file and I'll ensure that a |
correct and authorized FRAZL310.ZIP file is made available to you |
either by mail or by uploading it to your favorite BBS. I will |
require either a fully paid registration or $3.00 to cover costs of |
disk, mailer, and postage before I can mail you a new program disk. |
I'll upload to your favorite BBS in exchange for the phone number of |
that BBS. |

To start the game, type "frazzle" at the DOS prompt and press