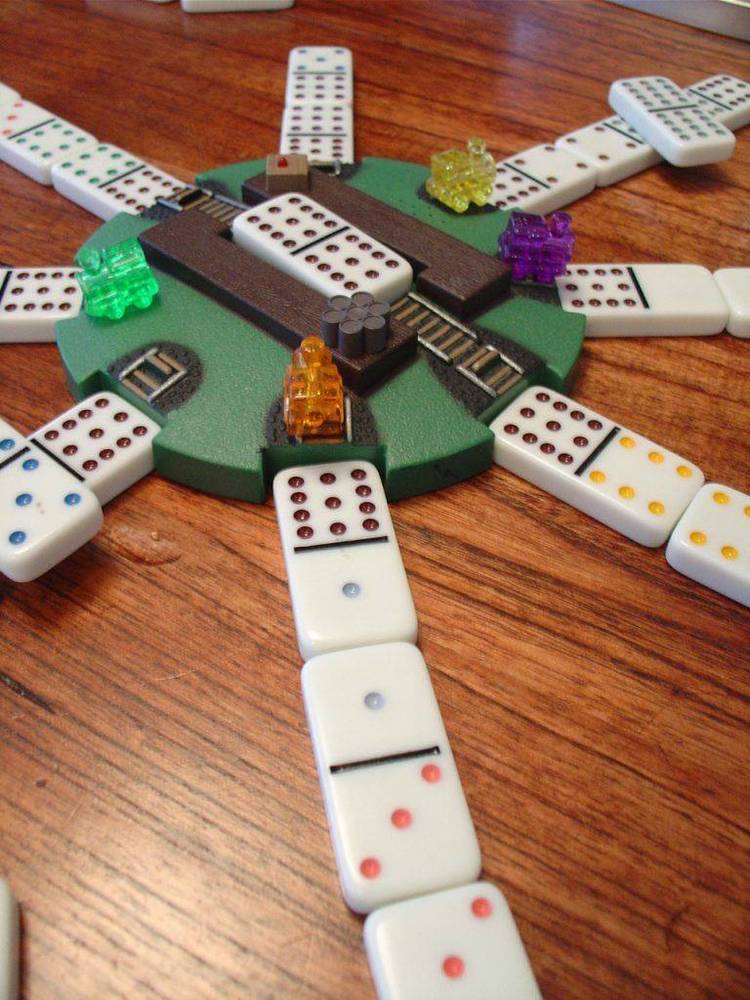 Contents of the FOURSIDE.TXT file


FourSide is a challenging variation on the popular
dominoes theme. The game is comprised of placing
four-sided game pieces, each side containing a number,
on the game board in such a manner that all surfaces the
new piece contacts contain a matching number for that
surface. The more surfaces a new piece touches, the more
score you receive!

There are two menus in FourSides. The first one, the
GAME PLAY Menu, appears after the title screen. This menu
offers you several options:

+ playing another player,
+ playing your computer,
+ watching a demo of play,
or
+ quitting the program.

The option currently active is highlighted by a bar
which can be moved with the UP- and DOWN-ARROW keys. To
select an option, highlight it first then press ENTER.

After selecting an option on the first menu, the LEVEL
OF PLAY Menu appears. Selection of an option on this
menu requires highlighting and pressing ENTER,just as on
the Game Play Menu. The Level of Play Menu allows you to
set the difficulty of play or to quit the game.

Difficulty affects block complexity, i.e., the diversity
of values a block side can have. For example, the
BEGINNER level has blocks with sides having values 1, 2,
or 3, while the EXPERT level blocks have values ranging
from 1 to 9. The higher the range, the harder it is to
make a valid move. If you are playing the computer, the
level of difficulty also affects the computer's playing
skill, so beware! Your computer will become craftier and
craftier as the game progresses.

After you select the level of difficulty, the FourSides
game screen appears. It has two distinctly-separate
sections, the red STATUS area on the right the blue BOARD
area on the left. The STATUS area is used to display
scores and to manipulate blocks in your hand. The BOARD
area is used for making all your moves. A player's hand
consists of five blocks which can be used to make these
moves.

The blank line appearing at the top of the screen at the
beginning of a game is used during the game for the
display of prompt messages. At the bottom of the screen,
special key functions are displayed. These keys are
"special" because they function uniquely and differently
from their normal key.

The special keys and their functions are:

F1 -- Gives the current player a HINT by
indicating a possible move.
A hint is not necessarily the best move, so
save your three allowable hints for when they are most
needed.

F2 -- Toggles the SOUND ON/OFF. When the sound
toggle is ON, a visual musical note will appear at the
bottom of the screen.

ESC or F8 -- Allows you to quit or leave the program.

SPACE -- Toggles between the BOARD and STATUS areas.


Before play actually begins, the player to move first is
selected and high-lighted in the STATUS area, and a block
is placed in the center of the BOARD area. This block is
the "primer block" because all subsequent moves stem from
it. The green and red areas appearing on the BOARD are
BONUS and MINUS areas which affect the scoring of each
move made in these areas.

THE STATUS AREA --- In this area are displayed players'
scores as well as the current player's hand. Each player
must formulate a move using one of these blocks. The
current block, indicated by a double-arrow highlighter
pointer, can be rotated to fit an area on the BOARD with
the ENTER key.

The LEFT- and RIGHT-ARROW keys move the blocks in the
hand. After a block has been chosen and properly rotated,
a player can attempt a move on the BOARD.

THE BOARD AREA -- In this area, players' moves are made
by moving the cursor with the ARROW keys to the desired
area of the BOARD and by then pressing the ENTER key. A
move is valid only if it is made in an area where a move
has not yet been made and where the contacted sides of
adjacent blocks have matching values. The block used for

a move is the one in the STATUS area highlighted by the
double-arrow.

If a move is successful, the block is moved from the
player's hand to the board. If the move is not
successful, a low tone will sound, and a new move must be
attempted. A valid move is always possible because the
computer checks before allowing a player to attempt a
move. If a player cannot move, the computer automatically
forfeits that turn.

A valid move must meet these requirements:

1 -- No previous move must have been made to the
position.
2 -- Contact must be made with at least one block
already on the board.
3 -- All touching sides of the blocks in the
resulting contact(s) must have identical values.

A valid move awards the total of the VALUES of all
touching sides TIMES the NUMBER of touching sides. For
example...

Play ends when all BOARD areas have been used, or when
no valid moves exist for either player. A FINAL SCORE
Menu appears and indicates the winner(s). After the FINAL
SCORE Menu, a PLAY AGAIN Menu appears to allow the
user(s) to play again or exit the program.

At the EXPERT level, your computer is extremely good!
Rest assured that this level of play is NOT achieved
through any type of "cheating," such as the manufacturing
of blocks to fit particular moves. The computer merely
checks all the possibilities before moving. Its skill
comes from hard work and not foul play!