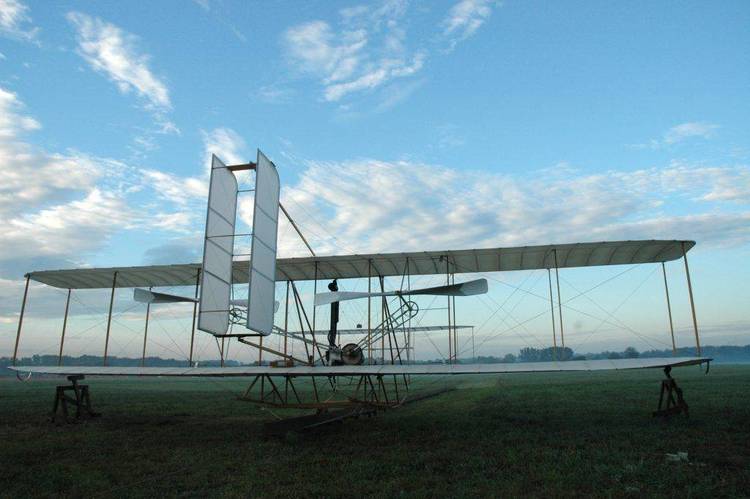 Contents of the KHFLYER.TXT file


This is it... the Wright Brothers' first practical, powered aircraft.
The first powered, controllable aircraft in the world. This is the one
hanging in the main hall of the Smithsonian Air & Space Museum in
Washington, DC.

It flew several short flights on December 14th and 17th of 1903 near
Kitty Hawk, NC. The last flight was the only one that the Wright
Brothers considered long enough to be TRUE flight. It flew 852 feet
across the ground into a stiff wind. The airspeed of the craft was an
average of about 31 mph. The air distance (taking into account the
headwind) was more than a half-mile. It could easily have gone a lot
farther (they carried enough fuel for a flight of 10 miles) and Wilbur
was attempting to fly all the way to the town of Kitty Hawk, 4 miles
away. However, a small sand dune was in his path and the turbulent air
coming over the dune upset the aircraft. Wilbur's lack of flying skill
(he only had about a minute of stick-time in powered flight!) caused him
to over-control for the turbulence and he made a less than soft landing.
The plane was only slightly damaged but after they got the plane back to
their camp, a strong gust of wind turned the plane over, cracking it up
badly. This was the last time this particular aircraft ever flew.

History has demonstrated the brilliance of the design of this aircraft.
It even featured "auto-coordination", the rudder and ailerons (no actual
hinged ailerons, the wings warped) were tied together to counteract
adverse yaw tendencies while banking. There is only one design flaw. The
forward elevator pivoted in the middle which made it very twitchy and
easy to over-control. It should have been hinged at the front rather
than in the middle. This would have resulted in a self-centering control
which would be much more difficult to over-control.

The Wright Brothers were not just "bicycle mechanics" as has often been
misunderstood. They were extremely competent in engineering and physics
and made their designs with the utmost of scientific precision and
understanding. For example, their propellor design was worked out
mathmatically using their wind tunnel airfoil test data with the
resulting prop creating FAR more thrust than any previous design. One
would assume that something like that would have been worked out through
laborious trial and error, making many prototypes and testing the thrust
on each. But by the time that the Wrights got around to making a
propeller, they had already studied airfoil design to the point that
they could simply work out the design on paper.

The real Kitty Hawk Flyer could never have gotten off the ground under
its own power except for the happy accident that they flew on a windy
day in the winter at sea level. The plane did not have enough power to
accellerate to take-off speed in calm, hot air at a higher altitude. A
fact that created serious consternation for the Wrights when they moved
their operation back to their home in Dayton, Ohio. They had to create a
catipult mechanism to launch planes under more normal flying conditions.

This causes a problem for this FS4 version. FS4 does not properly model
wind while the aircraft is sitting on the ground. So it is not possible
to launch the FS4 aircraft under the most realistic conditions.
Nonetheless, this is great fun to fly. It reaches a top speed of about
35 in a particularly laborious, lumbering fashion. It's pretty fragile,
so land carefully. I think it's most realistic to fly with wind
turbulence set to "2". I like to fly it in spot mode so I can keep a
close eye on the distance off the ground. You can gain a good bit of
altitude but you'll lose it when you try to make a turn.