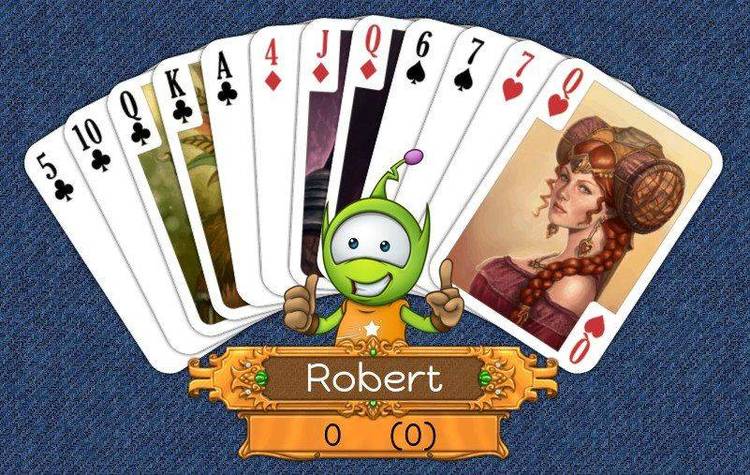 Contents of the FIVEH.DOC file

CARDS - From a pack of 52 cards discard the twos, threes, and black fours,
then add the Joker. Each player receives ten cards in the deal, and three
cards form the kitty.

The Joker is always the highest trump. At a suit bid, the jack of that suit
called the Right Bower, is the second best trump. Third best is the jack of
the other suit of the same colour as the trump; this jack is the Left Bower.
Thus if hearts are trumps, the three highest trumps are : Joker, Jack Hearts
, Jack Diamonds. The rest of the trump suit ranks : A (fourth-best), K, Q,
10, 9, 8, 7, 6, 5, 4.

BIDDING - The player at the left of the dealer declares first. Each player
in turn has a chance to declare, either passing or making a bid higher than
any preceding bid. Each bid must name a denomination and a number of tricks,
e.g. 'six spades','seven no-trump'. A bid is sufficient to overcall a
preceding bid if it has a higher scoring value, according to the table :

Bidding continues until three of the four players have passed. The bid
winner then has one last chance to up the bid. The highest bid is then the
contract and the person who made this bid and his partner are the
contractors.

PLAY - The contractor takes the kitty into his hand, then discards any three
cards face down. He then makes the opening lead.

The hands are played out in tricks. Each player must follow suit to the lead
if possible; if he cannot follow suit then he may play any card. A trick is
won by the highest trump played, or if there is no trump then the highest
ranking card of the led suit. The winner of a trick leads the next.

At no-trumps, the Joker is the sole trump. It wins any trick but a non-
leader must not play it unless he is void of the led suit. If the Joker is
led the owner specifies a suit that all other players must play to if able.

Partners pool tricks won together. The contractor and his partner must
attempt to win at least the number of tricks specified in the contract.

SCORING - If the contractor and his partner wins the number of tricks he
bid, he scores the value of his bid according to the table above. If they
win all ten tricks they score the greater of his bid or 250. If they fail to
make the contract then the value of the bid is deducted from their score.
Players can thus have a minus score.

The opponents of the contract score 10 for every trick won regardless of
whether the contract was defeated or not. However a pair cannot go above a
score of 490 in this manner. To win they must score through there own
contract.

The pair to first reach a score of 500 wins the game. Likewise if a pair
gets to minus 500 or less then they have lost the game.

In this computer version of four handed five-hundred you play the hand of
south. Your partner is north, and your opponents are west and east. The
computer deals hands randomly to the four players and the kitty.

The computer hands have no absolute knowledge of what is contained in his
partners or opponents hands. They do however gain information from the
bidding of the other players and the cards which are played, just as in an
ordinary game. The computer takes more risks in bidding if opponents are
close to a winning score of five-hundred.

When running five-hundred you are first asked whether you wish to see
opponents hands. If yes you will observe the hands of the three other
players as the game progresses. This would be selected if you wanted to
observe the strategies of the computer. If no, you play without the luxury
of seeing any hand but your own, as in a real game.

When looking at the other hands * = Joker, L = Left Bower.

The play screen will then appear. In the right hand corner is the score-card
showing a trick count, the points score, and the number of games won by each
pair. The left hand corner gives you the dealer, the contract, and who wins
each trick.

Bidding progresses in a clockwise direction until you are prompted for your
bid. You first input the number of tricks you think you can win (input 0 to
pass), and press return. You then input the first letter of the suit you
wish to be trumps (N is no trumps). An invalid bid will not be accepted.
Bidding continues until three of the players have passed. The contract
winner then has one last chance to up the value of the contract.

If a player other than yourself wins the contract, he picks up the kitty and
discards. Otherwise the kitty appears above your hand and you must input
three cards to discard from your now total hand of thirteen cards. Input the
numbers that appear under the three cards (i.e. 1,2,3 .. 13) individually.
For example if you want to discard card numbers 2,8 and 11 you would press 2
enter,8 enter,11 enter.

Play then begins. When you are prompted to enter the card number to play use
the number that appears under the card you wish to play (i.e. 1,2,3 .. 10).
An invalid card will not be accepted.

At the end of each trick press any key to start the next trick. Play
continues until all ten cards are played. Another hand will be dealt after
the last trick if neither player has yet reached five-hundred or negative
five- hundred.

If you find this program useful would you please send a payment of $NZ22
(approximately UK 9 pounds) to the below address along with any comments and
suggested alterations.

In return I will reply to any suggestions, send you the pascal source and
any altered version of the program.