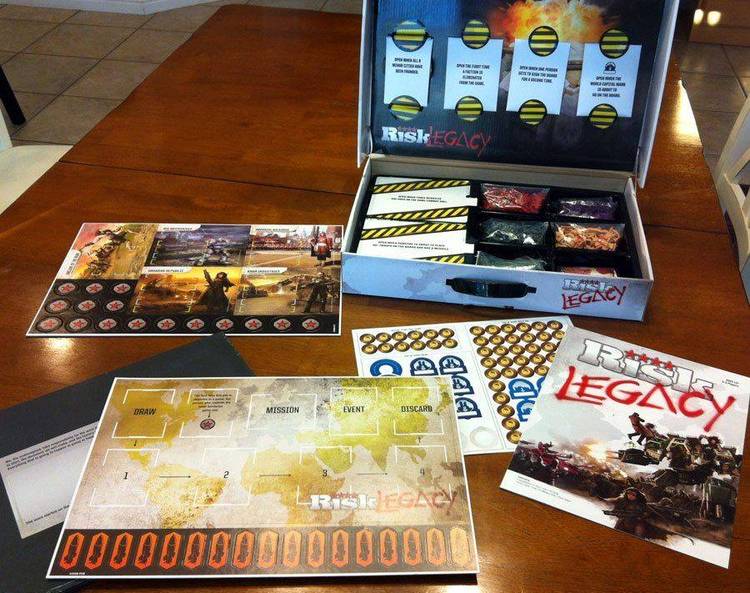 Contents of the EGARISK.DOC file

This game runs on the IBM PC, XT, AT or compatible with at least 384K
of memory and an Enhanced Graphics Adapter (EGA) with 256K of video
memory. The game was first developed on the PCjr, and this is the
adaption of that game for the PC and EGA.

This game took over two years of work to complete. If you find it
enjoyable, a small contribution of $ 10 would be very much appreciated.
This donation would automatically entitle you to update notices whenever a
new version is made. To get the new version, you would need only to send
a disk and a self-addressed, stamped disk mailer and I would send you the
new version.

In supporting public domain authors, you are helping everyone who benefits
from the public domain by encouraging us to put more out programs.

THANK YOU ! Please send contributions to:

The Object of the Game
========================
The object of the game is to conquer the world. This is an ambitious
game that requires thought and cunning. By arranging armies to defend and
attack, and by rolling the dice ( through computer simulation ) to defend
and attack, battles are won and lost.


Starting a Game
=================
The game starts with the hello screen and askes if you want to start
a new game or restore a game off the disk. To start a new game, just
enter the number of players that will be playing. Then the players will
enter their names and the color of their armies.

The territories will then be dealt out randomly and the players will
take turns deploying their men. One player deployes his or her armies at
a time, and when all armies are deployed each player has the opportunity
to re-arrange his or her men.

When all the men are deployed and all the players are satisfied with
the army emplacments, then the game will pick a player at random to start
the attack.

If all the men are killed on the defending territory, it now
becomes the property of the attacker and he or she moves some of the
armies from the attacking territory to the newly defeated territory. This
is why to attack you need at least 2 armies on the attacking
territory.

When the attacker wants to stop attacking, or when he or she has not
enough armies to attack, ( that is, if none of the attackers
territories that touch an opponent has two or more armies on it ) then
the attacker COUNTS UP. This formally ends the attack.

Also, If the attacker has any continents ( more on continents later ),
that belong entirely to him, then he gets bonus armies for this.

When the attacker is finished deploying the bonus armies, the attack
goes to the next player. The attack cycle is started again.

2 : Touch or be connected by dashed lines
to the defending territory

The defending territory may have any number of armies on it.

The ATTACK COMMAND is in the format of: X#Y# where

The continents are bordered by other continents by double lines where
they touch and by the usual dashed lines over ocean. They are not
intended to be geographically accurate. Where they border and do not
touch ( like Greenland and Iceland - A5 and E1 ) you can tell by the
territory number which continent the territory belongs on.

The number of armies on the territory can be seen usually bordered by
a dark square. This depends on the players color, though. A dark color
will not leave much of a box. Watch when the board is being drawn, the
numbers that are there first are the territory numbers, the others are the
army numbers.


When a valid ATTACK COMMAND is entered, the game rolls the dice and
displays them in the South Atlantic. The top row are the attacker's dice
and the bottom is the defender's. The loser gets an army taken off. If
the loser is the attacker and he now only has one army left, then he is
not asked if he wants to attack again. If the loser is the defender and
has no armies on his territory, then the territory now belongs to the
attacker and the attacker puts some armies from the attacking territory on
it. This is how territories are gained and the game won.

2 : Redraw of board on screen

3 : Save and retrieve a game

4 : Change the background color and palette

5 : Master control over game parameters
( Number of armies on a territory,
Territory ownership,
Reviving dead players or
Surrendering to another player )

This redraws the board. This is useful if input is made in a way
that the computer doesn't like and wrecks the screen. If this happens,
just input the information, don't worry about the board. After you are
done inputting, use the BOARD command as the ATTACK COMMAND and the board
will be restored to normal.

This saves a copy of all the board settings and player statistics.
The game will ask for a game number to identify that game. If you want to
see a directory of games on the disk, type a slash ( / ) and hit
enter. Enter a number for the game and hit enter. This will save the
game at that time for later retrieval.

This restores an already saved game from the disk. Enter the game
number to restore or a slash ( / ) for a directory of games available.
The game in progress will be lost when a new game is restored, so be
carefull.

This command brings up a sub-menu of choices. They can change the
number of armies on a territory, change who owns what territory, change
which player is the attacker, bring back a player who has been killed off,
or allow a player to surrender his armies and territories to another
player.

Just hit the number of the desired action and enter the desired
information. Take care in use of this operation, it exists only to
correct mistakes made by players or to facilitate negotiations between
players. It should not be used for cheating, or else your conscience will
plauge you forever and your hair will fall out and clog your disks !!

There are two other functions supported by the game. They use the
function keys to togle the sound on and off, and to interrupt the action
of the game at any point. They are:

F1 : Return game control to Command line
( Be careful using this, it can leave
some things uncompleted ! )

F5 : Toggle the sound On or Off
The game starts with Sound On

This ends the game before there is a winner. This is usually done
after the game has been saved, or ( in rare cases ) when peace has been
declared by the players.

-- The count up comes at the end of the turn

-- Only one army is taken off at a time, regardless
of how many die are rolled.

-- There are only ten territories in Asia, and
Australia is reversed.

-- RISK cards are not used for bonus armies.


In the fourteen years that I have played RISK, everybody that I've
met has had different rules to this game. These are mine, and if you are
used to something different, they may take a little getting used to. I
hope you will enjoy this game.