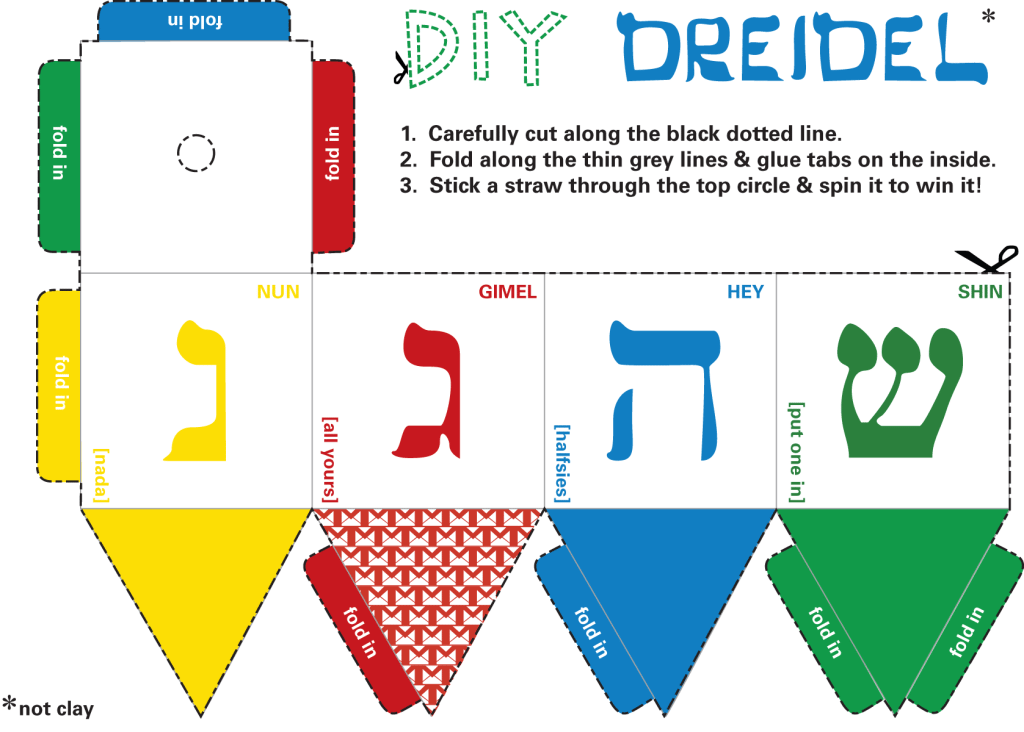 Contents of the DREIDLE.TXT file

The Game of Dreidle (pronounced dray-dell)

The game of dreidle is an ancient game that dates back about 2,000 years.
It was played to elude the Greek-Syrians who desecrated the second Temple,
occupied what is now Israel, and attempted to prevent the Jews from
practicing their religion. Today the game is played by young and old
alike as part of the 8 day celebration of Chanukah beginning on the
25th of the Jewish month of Kislev. It marks the rededication of the
temple after being desecrated by the Greek-Syrians when a small
amount of oil was found (enough for only a single day) burned for
eight days.

The rules of the game are simple. There are some variations in
the game but the standard rules are provided below. Each player
starts with a fixed number of coins, beans, or other objects and
a predetermined number is placed in the "pot" at the center of
play. The dreidle is a top with four sides and operates much as
dice do in games today. The 4 sides of the dreidle are labeled
GIMEL, HAY, NUN, and SHIN which are 4 Hebrew letters standing
for the translated phrase "a great miracle happened there." In
Israel the SHIN is replaced by the letter PO because the
applicable phrase in Israel is "a great miracle happened here."
The dreidle is spun. It is constructed so that it will land on
one of its 4 sides. Play passes clockwise or counterclockwise
to all players. In the play of the game a GIMEL means that you
take everything from the pot and then each player puts one
object back into the pot. The HAY means that you take half from
the pot, rounding up for an odd number. The NUN means that you
do nothing and the SHIN means that you put one object into the
pot. The game can last for very long periods of time depending
upon how many objects each player starts with and how many are
put into the pot initially. A player is out of the game when he
he is out of objects and cannot complete his turn. The play
ends when all but one player are out of the game.

I initially wrote the accompanying program for my son who was
developing an interest in computers and later adapted the
program to study the time duration statistics of the game of
dreidle. The complete program is provided here. You can use
the program to estimate the number of turns required in the game
for various starting conditions or to simply play the game using
the computer. The program will either simulate plays in a
single game or multiple games, showing various game statistics,
including the winner, number of plays and ending conditions. The
play by play simulation allows the user to press the 's' key for
each spin of the dreidle and the computer displays the results
of play. There are two automatic play modes in which the 's'
key does not have to be pressed. The first automatic mode
simulates plays of a single game. The second simulates the end
conditions of any number of games automatically. Depending on
your computer and the number of games selected, this may take a
significant amount of computer time. You may press the spacebar
at any time to stop the program.

I am distributing this program along with this documentation file to
assist in raising funds for my son's school, the Gesher Jewish Day
School in Alexandria, Virginia. The school provides a quality
education in an environment conducive to learning and supports
kindergarten through grade 6. It is the only Jewish Day School in
Northern Virginia. The school especially needs financial support now
for its planned move to new quarters at the Jewish Community Center
near Fairfax.

You are encouraged to pass this program along to your friends;
however, I request that the program remain unaltered, that this
documentation file be passed along with the program and that
copyright notices be observed. If you enjoyed this program, I
would like to hear from you. If it motivated you to contribute
to the school, please send your tax deductible contribution
payable to Gesher Jewish Day School to the following address and
be sure to mark "dreidle program" on the envelope. Any comments
and suggestions on the program are greatly appreciated. If the
response is favorable and I have time, I expect to develop an
enhanced version of the program in the future which would
probably include some form of graphics. In advance I wish to
thank you for your comments and/or contributions and wish you
all a happy holiday season.