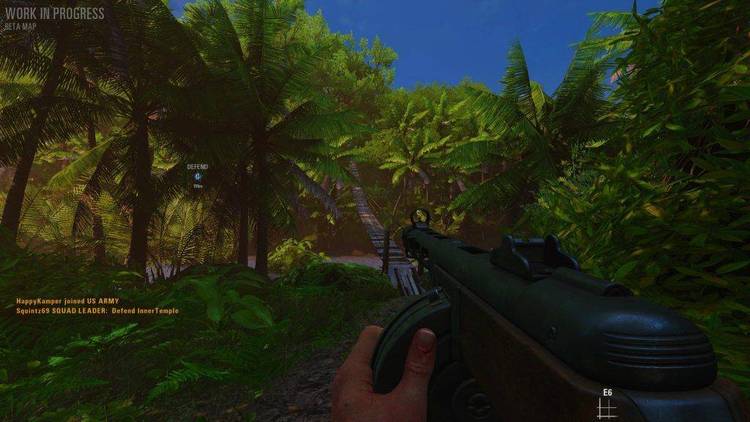 Contents of the {COMBAT}.DOC file

The author grants the user of this program a limited license to use and dis-
tribute Combat! - Survival in the Jungle. In return, the user must comply with
several rules set by the author. Whoever chooses to use this program for their
enjoyment explicitly acknowledges the rules that will be listed shortly:

1) The main program, COMBAT!.EXE and it's accompanying files shall not be al-
tered in any way. So, please do not pull out your favorite sector editor
and put your name in the program. Also, please do not modify this text
documentation or the various screens. Thank you.

2) When distributing Combat!, please have all five files : COMBAT!.EXE, COM-
BAT!.SCR, ENDBAT.SCR, {COMBAT}.DOC and LOOK1ST.!!! together within a file
archive called COMBAT!.ARC. If any file listed above, in the archive, are
grossly editted, please don't upload it and/or re-circulate it around.

3) If you like Combat!, or any of the other ConscienceWare programs, you can
either send a small donation (whatever you feel reasonable) or you can go
and call up my bulletin board, "The Medium of Exchange" and upload a few
good files that you think people would like. This program is distributed
as Shareware, but you have a choice of how you want to "register".

4) How fun, enjoy and upload it to other places, as long as they're unmodif-
ied. Thank you for your support and cooperation. As with all of the docs
I write, my mailing address and Bulletin Board System number are at the
end of the documentation.

I know that this may be a fairly long documentation for such a simple to play
program. But the truth of the matter is that I just like to write. So I'm just
writing a fairly thorough history of this particular program, COMBAT! .
As you may well know, I wrote that I was planning on coming out with a game in
Spring, around the time of the 1988 Olympics in Calgary (Winter). I wrote that
particular promise (?) in the documentation for Trivial Trivia 1.0, well, as
usual, people who don't know when to put their foot in their mouths often find
that they have a lot of work to do. I didn't really work too hard on this one
program, but it was still "challenging". Once you run this, you may be able to
recognize this game to a similar, simplier program from way back when...
I added a whole mess of new features and touched it up so it looked nicer. The
play mechanic is still the same and reminded me very much of a game I had tried
on a No-Change bulletin board system in early 1985. I do not know who the real
author of this program is, but he went by the name of "Lord Smith". This game
was originally written in BASIC and it was simple enough to convert it to the
QuickBASIC language, so I did. It is a rather large program, but it is a fair-
ly nice, relaxing, fun to play game. (Unbiasedly said, of course).
The way that I had the idea of writing this game is because I thought it was
very entertaining and fun to play. The original that I had stumbled onto was a
white on black program, in all uppercase and was sort of off-centered. But the
author had done an excellent job, I think. I also changed some of the names of
the opposition that you have, since I did not think those were suitable for my
taste. One thing you should be warned of though, this IS a noisy game. The or-
iginal had no music, pictures, color, etc. but this game is full of it. I think
you will be pleasantly surprised. But if it is late at night, I wouldn't recom-
mend playing this yet, unless you have a sound-proof room. I made additions to
this program while listening to music from the 1960's, so you know it'll be a
little on the weird side. If I were to add all the various hours on and off I
had put into this, I would say that it would equal out to about 48 hours total.
The welcome screen is the same as of my other programs. A sort of weak attempt
at a three-d type hologram with letters on it. The color is as colorful as ever
and little surprises are hidden throughout the program.
I don't really expect much compensation for this program since it wasn't an
original idea, but if you would like to upload a few good files to my board,
I'd be grateful for it, or if you would like to send some monetary contribution
that would be fine, too. If you send $25 or more, you will be a full-fledged
user on my board, with 60 minutes a day and no download limit or ratios. Don't
forget, ConscienceWare can work, but only with your help!
Thank you for your support, and I hope to be writing more original programs in
the near future for the population that inhibit the modem circuits or even else
where!


COMBAT! places you in the jungles of a war-torn country. There are many foes
which will stand in your way. 25 of them to be exact. You are a seasoned army
veteran who has been detached from his troop. You must go alone through the
jungles and reach your troop. You sense that they are only 25 quadrants away.
But every quadrant is filled with new and disasterous encounters. You will need
all of your wits, stinginess and resourcefulness to see you through on this one.
There is also the threat that you will run out of ammunition and the monsters
are very die-hard. It is hard to tell who is friend and who is foe. You may be
able to trick an untrained, young, very un-wise soldier into leading you to the
safety of your troops, but that is very unlikely, although there may be a slim
chance. You have several foes, here is a list of them, from the easiest to the
hardest:

Untrained Soldier - Usually they are still kids, not much older then teens of
today. Often very trusting, but some are trained better
then others.

Leftist Terrorist - A ruthless marauder. He doesn't fight fair, but neither
will you!

Soldier - A seasoned, trained soldier. Not quite as good as you,
but he is still a very dangerous foe.

Sniper - Watch out for these. Snipers do not fight fair and they
hide in trees, where you can't touch them except with a
missle-type weapon, IE. flame-thrower, guns, grenades.

F-15 Strike Eagle - Whoa! Somehow these guys got high-tech stuff. These birds
HAVE to be your most dangerous opposition. They show up
fairly frequently, but flame-throwers usually dispose of
them quickly before they can get a shot in.

Check with the program COMBAT!.EXE, which will ask you if you would like inst-
ructions after the opening screen. It explains in-depth all of the commands and
other useful miscellaneous things about the game. It's sort of like a 2nd doc.


You have limited amounts of everything, and there isn't any 7-11s so you will
not be able to just walk in and grab a couple of six-shooters or some charges
for the old flamethrower. Conserve everything and don't use it unless it is
absolutely neccessary. My motto is: "Don't shoot when you can stab!"


Here are the acknowledgements once again. I would first like to thank Lord
Smith for writing the original program. I would also like to give thanks to
Timothy Young, for his help and considerations/ideas and playtesting. Thanks
also go to good old sixties music, which really kept me awake and interested
when I didn't feel like programming (if you can call what I do, that). I had
particularly liked a couple of them, one was Telstar, a no-lyric type tune,
and Hey Paula, they were performed by Tornadoes 74 and Paul and Paula (resp.)

Will there be more programs written by me? I really cannot say. Although I
can say that I enjoy programming a lot, and will still keep on learning abo-
various languages. One thing that I know for sure is that I will keep working
on Trivial Trivia version 2.0, with the various features that I described in
the TT 1.0 documentation. I would also like to write an original sequel to
COMBAT! - Survival in the Jungle, which will be much more different. I cannot
guarantee any set dates of when these programs should be distributed, since I
am fairly busy, but it shouldn't be too long, though. So, look for future prgs
from ConscienceWare and keep on believing, for one day, it will come true!


Here is some information that I didn't mention earlier in the documentation.


Bulletin Board System (The Medium of Exchange) number:

* If you are planning on sending comments, please don't forget your name.
Or if you call, just leave a comment and suggestions! Thanks for your
cooperation and support! ConscienceWare can and will work!