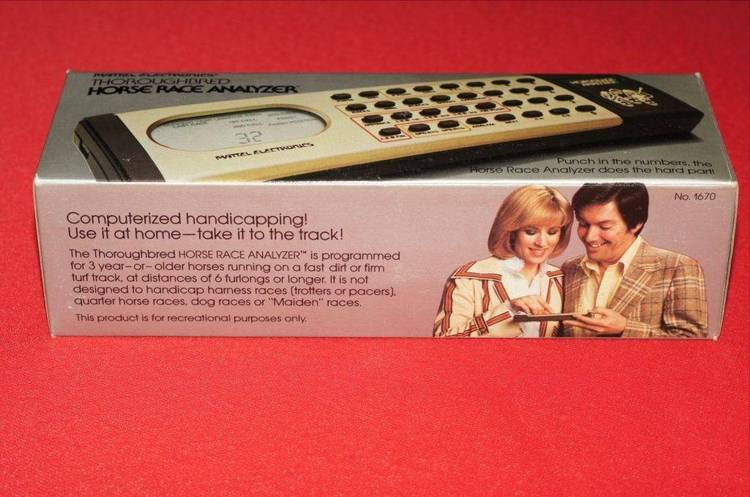 Contents of the BUCKTRON.DOC file

An IBM PC,AT or compatible with at least 256K. PC-DOS/MS-DOS
versions 2.0 or higher. A DAILY RACING FORM to check the
predicted results in actual races.

The BUCKTRON DEMO may be copied and distributed freely.
The live version may be acquired for a $25 fee which entitles the
user to a non-exclusive license to use the software program.
The only difference between the live version and demo is the number
of horses that can be evaluated in a race. The live version can handle
a race with 14 horses. The demo can only evaluate 2 horses at a time.

BUCKTRON is a SPEED HANDICAPPING METHOD that attempts to use
earnings, wins, seconds, thirds, fractional times, distance, APV,
consistency, average earnings, track variant and lengths beaten as
found in the DAILY RACING FORM past performances to predict the
outcome of a race. The smart handicapper will use this information
as a component of his decision making process and not as an
ABSOLUTE PREDICTOR OF RACE OUTCOME. BUCKTRON is the result of
studying over 10,000 horse running lines. The code is well written
resulting in data presentation far superior to most systems marketed
in thoroughbred racing publications.

The BUCKTRON DEMO consists of 4 files. Three screen files and
a main program file. To use BUCKTRON, simply type in "BUCKTRON"
at the DOS prompt and press return(enter). The data entry requirements
are self explanatory at each prompt.
Comments, like to see's, and criticisms are welcome. Valid hints,
techniques and systematic approaches will be reviewed and incorporated
into subsequent version's of the program based on merit and practicality.

[F1] pressing this key results in immediate Exit to DOS