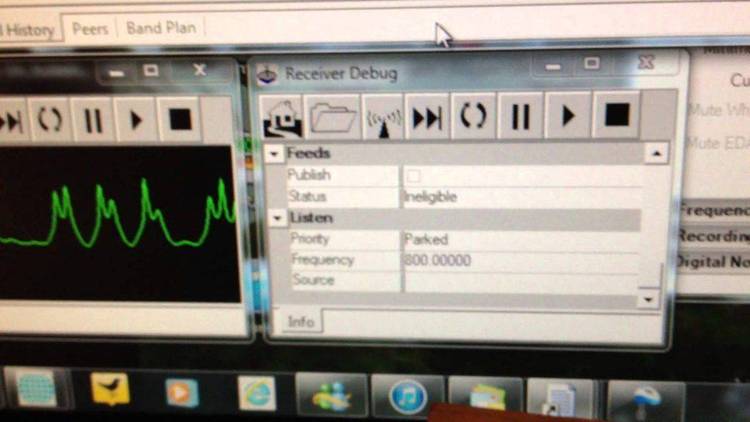 Contents of the INTRSCAN.TXT file


This introduction is intended for people new to the scan-
ning hobby. It tells where you can buy your first scanner,
what features it should have, how to get frequency informa-
tion, and mentions a few scanner clubs worth joining.

Every day and night, scanner hobbyists are entertained by
what they overhear on their radios. Police cars, fire engines,
ambulances, armored cars, trains, taxis, airplanes, and buses
are all equipped with radios and you can listen to them. You
can monitor the local sheriff and fire departments to hear
about events "as they happen," before the news reporters hear
about them. Hostage dramas, bank robberies, car crashes,
chemical spills, tornado sightings are all fair game. In a
single afternoon, you can hear a high speed police chase,
DEA agents on a sting operation, and undercover FBI agents
as they stakeout a suspect.

How about listening to The President of The United States
discuss strategy with his advisor from a radiotelephone in
Air Force One, or a team of Secret Service men protect him?

Listen to your neighbors deal drugs over their cordless
telephone, or as their conversations are picked up and trans-
mitted over the airwaves by their sensitive baby monitor
intercom. Yes, it's legal to listen!

Take your scanner to sporting events and listen to race car
drivers, football coaches, etc. Listen to airline pilots as
they talk with air traffic controllers and their companies.

Monitor the everyday hustle and bustle of businesses, from
cable TV repair crews tracking down pirate descrambler boxes,
to security guards at your nuclear power plant or mall security
guards chasing a shoplifter.

You can even listen to the order taker's wireless microphone
at the local McDonald's restaurant!

In the United States, scanning from your home or at work is
perfectly legal in most situations. The Electronic Commun-
ications Privacy Act of 1986 made it illegal to listen to
mobile phones, and a few other types of communication, but
many scanners cover these frequencies, and it's clear that
Americans still listen to whatever they want in the privacy
of their own homes despite the ECPA.

Speaking of privacy, federal law also requires you to keep
what you hear to yourself and not use the information you
hear on your scanner for personal gain.

Be aware that California, Florida, Indiana, Kentucky, Michigan,
Minnesota, Nebraska, New Jersey, New York, North Dakota,
Oklahoma, South Dakota, Tennessee, and Vermont have laws
pertaining to scanning while in your car. Indiana restricts
some portable scanners. You can find out about these restrictions
in a 39 page paperback, ANARC Guide to U. S. Monitoring Laws,
compiled by Frank Terranella, available for $7.50 from ANARC
Publications, P.O. Box 462, Northfield, MN 55057.


What Scanner Should I Buy?

Scanners are available in two varieties: crystal controlled
and programmable. The crystal controlled models are cheaper,
but require the user purchase and install a $5 crystal for each
frequency of interest. Programmable units don't require crystals
and usually have a keypad that permits you to store frequencies
into channels. Programmables are now so cheap it doesn't make sense
to buy a crystal unit as your main scanner unless you get it for
under $45 or so.

You can get a battery operated hand held scanner, a bigger
"base" scanner which is powered from an AC outlet, or a
mobile scanner which connects to your auto's electrical
system.

Make sure your first scanner:

1. has a "search" feature, which allows it to search all
the frequencies between two frequency limits of your
choosing. The lowest cost programmables can't search.
2. covers the 800 MHz band unless you live in a very
rural area where this band is not used. Usage of the
800 MHz band is growing by leaps and bounds.

If you're not sure whether you'll like scanning, don't want
to spend much money, a 16 channel radio will do. In general,
the more channels and banks, the better.

Deluxe scanners can be controlled by a personal computer,
although this feature isn't important to most scanner owners.

All scanners come with a built in antenna, permitting
reception up to about 20 miles or so. Outdoor antennas can
extend reliable reception to 100 miles or more.


Where Can I Buy A Scanner?

Almost every community has at least one Radio Shack store,
and you can find scanners there. Discount chain stores
like Service Merchandise, McDade, or Bell sell scanners,
but carry just a few models. Department stores, like Sears
and Montgomery Wards, sometimes offer scanners, although at
high prices.

Used scanners may be found at hamfests, flea markets, or
listed in the classified advertisement section of your newspaper.


Where Can I Obtain Frequency Information?

To avoid chaos, the FCC licenses two-way radio users and
assigns them specific frequencies. Groups of frequencies
are allocated to specific types of users, so you won't usu-
ally find fire departments using the same frequencies as
taxi drivers, for example.

Books: The most convenient source of fire, police, and local
government frequencies is the Police Call Radio Guide, published
each year in 9 regional volumes by Hollins Radio Data, and sold
at Radio Shack and larger book stores for about $7.

I also recommend Richard Prelinger's 1985 book, Monitor America,
published by SMB Publishing, and available from Grove Enterprises
for about $15. Although somewhat out of date, this single edition
contains 582 pages of police, fire, local government, news media,
sports, national park, and commercial broadcast frequencies for
all 50 states. It contains detailed communications system profiles
and precinct maps for major metropolitan areas. Police and fire
radio codes and unit identifiers unique to local agencies are
listed for several cities. This differs from Police Call, which
gives a more sterile, but uniform treatment of licensees,listing
even the smallest of towns.

Uniden has published several regional directories using the
"Betty Bearcat" name, although there are much better direc-
tories available from Scanner Master for some regions.

Government Records: Every year, the U.S Government sells
FCC license information, in the form of microfiche, floppy
disk, and magnetic tape, to the public through the US
Department of Commerce National Technical Information Ser-
vice. The high cost of buying government records limits
their appeal to hardcore enthusiasts. You can write for a
catalog of FCC Master Frequency Database items to the NTIS,
5285 Port Royal Road, Springfield, VA 22161.


Do Your Own Frequency Detective Work

When you try listening to a frequency for the first time,
you'll want to know who you're hearing.

Although FCC rules require radio users to identify their
operations with their assigned call letters, most ignore
the regulation. This often makes it difficult to know who
is transmitting.

There is a challenge in deriving new spectrum usage infor-
mation on your own. Sometimes it requires several days of
listening, taping, and compiling fragments of information.
Other times, the frequency information is there for the
taking - without hassle.

You can approach from two directions:

1. Listen first: Monitor a frequency or frequencies,
and try to determine who's transmitting and what pur-
pose the channel serves. Once you identify the user,
log the information.

2. Compile first: Take advantage of opportunities, such
as examining the frequency label on a guard's radio,
or reading the FCC license hanging on the "radio
room" wall, to compile frequency lists, then monitor
the listed frequencies to confirm that they are eally
in use. Readers are urged to abide by the rules of good
taste and local laws in the quest for frequency info-
rmation. Don't trespass, wait for an invitation.

Most listeners use a combination of both approaches.

You can examine the FCC license on premise. I have found
the actual FCC radio license, complete with frequency
assignments, hanging on the walls of places like the mall
security office or company guard shack. You can examine
the labels on radio equipment. Frequency information is
engraved on labels on the back of many walkie-talkies, or
inside the battery compartment, like in the Motorola HT220
model. Most pagers have labels on the bottom or inside.
Like passwords taped onto terminals, it's not uncommon to
find Dymo tape labels embossed with frequencies or call
letters glued to the front of base stations.

You can make your own opportunities for eyeing the equip-
ment or take advantage of "open house" events. If informa-
tion is displayed publicly, then a reasonable person could
assume it's not government secret. Hobbyists are urged to
exercise a modicum of restraint and good judgement, how-
ever.

How Can I Use Equipment
to Uncover New Frequencies?

If you don't know the exact frequency, but have a general
idea of the range, use your scanner's "search" mode. Most
programmable scanners afford the ability to search between
two frequency limits set by the user. Three models, the ICOM
R7000, Bearcat 250, and Regency K500, have the ability to
automatically store active frequencies found during an unattended
search operation.

To find the frequency of a hotel communications system, one
fellow installed his Bearcat 250 in his car and parked in
the hotel lot, leaving the scanner in the "search and store"
mode. He left the antenna disconnected so the scanner would only
respond to a transmitter in the immediate vicinity.

Aside from a scanner and antenna, the most useful piece of
equipment for sleuthing is a voice actuated cassette tape
recorder. You don't need a high fidelity model or anything
fancy, a Radio Shack CTR-75 or CTR-82 will do. It's best to
use a shielded cable to feed the scanner audio into the recorder
rather than relying on the recorder's internal microphone.

VOX recorders allow one to compress a whole day's worth of
monitoring onto a single tape. I often leave a recorder
"armed" and connected to a scanner at home while I am at
the office or doing something else. When call letters are
mumbled, I can play and replay the tape until I hear and
understand them.

Test equipment can aid in the quest for new frequency
information. I've used a spectrum analyzer connected to an
outside antenna, and a frequency counter for close-in work.


Are There Any Scanner Clubs?

One of the best parts of the hobby is sharing it with other
radio buffs. Trading information with other hobbyists
about frequencies, communication systems, and receiving
equipment is more valuable than any pile of magazines.

The world's largest scanner club is the Radio Communica-
tions Monitoring Association (RCMA). Founded in 1975, the
RCMA is the "first national and international organization
of monitor radio listeners." There are several regional
chapters which hold regular meetings. Club dues are $18.50
per year, which includes a monthly newsletter of about 95
pages. Although the focus is on VHF and UHF ranges, there
is coverage of HF utility stations below 30 MHz. Club pol-
icy precludes printing certain sensitive federal law
enforcement frequencies, e.g., Secret Service, FBI, Cus-
toms, and DEA.

One club which does print sensitive federal frequencies is
the All Ohio Scanner Club. Its bimonthly publication, The
American Scannergram, is about 60 pages long. Although
concentrating on Ohio, there is frequency information from
other states, and plenty of product reviews and scanning
tips.