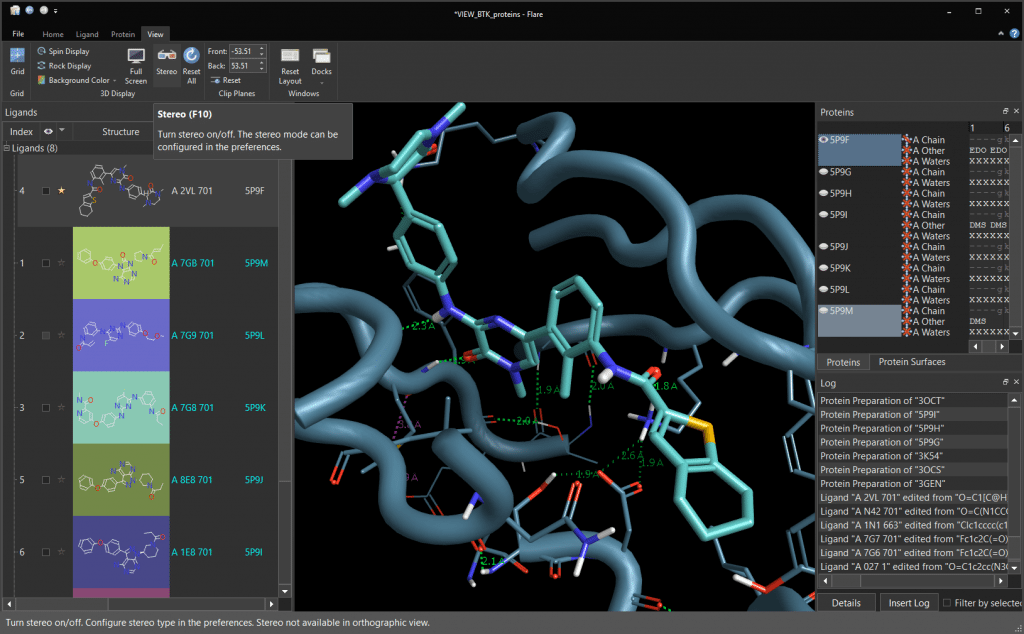 Contents of the CHEM.DOC file

CHEMICAL is a molecular modeling Program to aid in the formation
of three dimensional pictures of chemicals. Atoms are selected
from a Periodic Table (using the A command) and electron
orbital information retrieved. The Atoms are then bonded
(using the B command). The chemical is displayed as it is
being constructed. The chemical can be viewed from different
directions by using the up and down cursor keys and the V
command. If desired the Hybrid and Ionize commands can be used
to alter the orbitals before bonding. Atoms can be bonded
into groups, then the groups bonded to other groups to make
large chemicals. Version 3.0 is written in Turbo PROLOG 2.0.

CHEMVIEW is a companion program that shows 3-dimensional
animation of the models generated with CHEMICAL. CHEMVIEW
requires an EGA board and monitor. CHEMVIEW is written in
Turbo PROLOG with the graphics routines written in Turbo C.
To use CHEMVIEW simply start the program and select the
file desired.

CRYSTAL is companion program that places atoms on a lattice
framework to form crystal structures. The structure is
defined by a text file. A text editor is built into the
program. The text file is converted to a image that is shown
rotating in three dimensions. An EGA or VGA monitor is
required. Version 2.0 has been re-written completely in Turbo
C, version 2.0.

CHEMICAL requires 640K bytes of RAM and a CGA or EGA
display. You may need to eliminate RAM resident programs
in order to run CHEMICAL.

CHEMICAL is started by entering CHEM at the DOS prompt. The
CHEM.DOC, CHEM.TUT, and *.BGI files should all be on the
same directory. Select the graphic mode desired, then push
the Enter key. The program GRAFTABL should be run prior to
running CHEMICAL with a CGA monitor. The graphic display
format is different for the various modes for a particular
monitor. Try each mode to determine your preference.

The commands for version 3.1 of chemical are:

A - (Atom) This command displays a periodic table.
Elements are selected by moving the cursor to the
desired Element, then depressing the CR key. The esc
key is used to exit this command.

B - (Bond) This command is used to bond two atoms. A list
of all atoms selected is displayed, along with its
electron orbital configuration. The size of the atom is
determined the first time it is bonded.

A choice of three bond types: Anti, Dative, and Shared, is
provided to determine which atom in a bond will supply the
two electrons needed for a molecular orbital. A shared bond
takes two electron from each atom. A Dative bond takes both
electons from one atom. An anti bond allows three or four
electrons to be used in the bond.

C - (Clear) This command clears the screen and the buffer for
all Atoms and Bonds selected so far. A Yes/No menu is
used to reduce the change of accidently clearing the buffer.

FA - (Animate) This command executes program CHEMVIEW which shows
molecules in 3 dimensional rotation (on EGA monitors only).
The cursor keys are used to change the direction of rotation,
the + and - keys change the size, the End key stops rotation,
the space bar returns to the CHEMVIEW window and the Ctrl
Break key returns to CHEMCIAL. CHENVIEW.EXE must be on the
default disk.


FB - (View Buffer) This command stores the buffer under the
file name TEMP.DAT, then allows the file to be viewed.

FM - Minimize Chemical File size by deleting unused
orbitals. Do not use this command until you are
completely done, since no additional bonds can be
made to a minimized file.

FV - View a file from disk

G - (Group) This command is used to attach groups of atoms
that were made using the Bond command. One atom from
the group selected is attached to an atom of a group
previously selected. The new group can be rotated
around the X,Y, or Z axis before it is attached.

H - (Hybrid) This command is used to combine electron orbitals
into hybrids. A list of possible Hybrids is displayed.
A _5 or _6 ending indicates that the bonding angles have
been adjusted to make a 5 or 6 bond flat ring.

I - (Ionize) This command is used to ionize an atom. A list of
the possible ionizations is displayed.

MA - (Move) This command is used to manually move an Atom or
Group.

MC - Change color of atom. The color for all atoms of the
type selected are changed.

MD - Deletes a selected atom from the current buffer. This
command is most useful for modifing an existing file
into a similar chemical. All atoms following the one
selected are re-numbered. This command may require
several seconds on large files.

MR - (Re-center) All atoms are re-centered on the screen.
This command is used when reading files generated by
older versions of CHEMICAL.

MS - Rotate around Sigma Bond - Atoms are free to move around
sigma bonds, and will generally do so to minimize the
energy of the system. This command will rotate an atom
and other attached atoms.

MX - Rotate atoms around X axis. Do not use any of the
rotate commands until the molecule is complete. The
angle for bonds made after rotation may not be correct.

MY - Rotate atoms around Y axis

R - (Not on Menu) Read to buffer from TEMP.DAT

Atoms are listed on the left. In 16 color modes, the
color is used to designate the atoms. In 2 and 4 color
modes, the atoms are labeled.

W - (Not on Menu) The Write command write the buffer to
the file TEMP.DAT. The Write and the Read commands
can be used to recover from an error during
construction of a chemical.

Ring structures are difficult to make because of the large number
of possible bonds. Also the angles need adjustment to make a
closed ring. Special hybrids ending in _5 or _6 are provided in
CHEMICAL for constructing 5 and 6 flat ring structures. The ' and `
bonds should be selected to form rings. CHEMICAL defaults (high-
lights) to this choice to simplify ring formation.

The formation of combined six and five ring structures such as
Purine requires adjustment of the angles for the atoms to meet
correctly. CHEMICAL will make this adjustment if the six atom
ring (using _6 hybrids) is made first (don't forget to bond the
1st and 6th atoms before added the 7th). Then three _5 hybrids
should be selected. The default bonds should then form the correct
double ring structure. The first ring is generated clockwise and
the second ring is generated counter-clockwise.

The angles in the sp3 hybrid do not allow a flat ring. A
twisted ring can be made by selecting the default bond
selection sequence.

1) Use the A command to show periodic table
2) Select O,H, and H using the cursor keys and Enter Key
3) use esc to exit A command
4) Select the Bond Command
5) Select O and H
6) Select shared (default) bond
7) Select one of the O-H bonds
8) Use the Bond Command to make the other O-H bond
(Two atoms always need to be selected to make a bond)

Note: The angle between the Hydrogen atoms can be made closer
to the actual angle by selecting the sp3 hybrid for Oxygen.

* These Files are available from the author

CHEMICAL, CHEMVIEW, and CRYSTAL are placed in the Public Domain
and may be freely copied and distributed. The latest version of
including source code can be obtained from the author for $20.
Updates are $10 for registered users. The source code is not
for public distibution and is only available from the author.

PLANETS is an astronomy program that is also available. This
program shows motion of the planets, moons, and sun. Version
4.0 is now available.