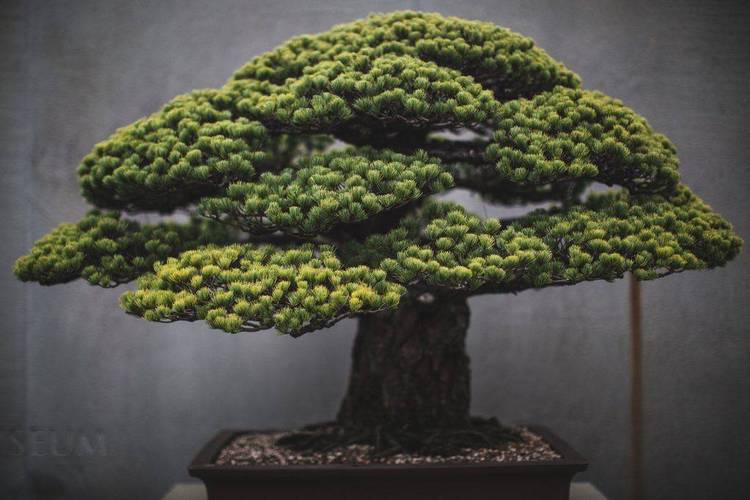 Contents of the BONSAI.TXT file

The Timeless Art of Bonsai

- - - - - - - - - -
INDOOR BONSAI AS HOUSEPLANTS are becoming increasingly more
popular as people begin to take non-traditional indoor plants and
train them in the bonsai tradition. Many plants that make suitable
general houseplants, many of which come originally from tropical
countries - ficus, schefflera, Ming aralia, camellia, crassula,
dracaena, fuchia, hibiscus, poinsettia, succulents, rhododendron,
jasmine, ivy, even herbs - are finding their way into bonsai pots.
Because of their quick, non-dormant growing abilities, as well as
their usually more flexible trunks and branches, many of the tropical
plants are much faster to train to classical bonsai shapes than
temperate trees. For instant gratification bonsai that can be
displayed indoors all year round, tropical plants are a definite
solution.
This type of bonsai gives the budding bonsai artist more to do
in winter months, since tropical plants still grow during the cold
season and can be trimmed and shaped and wired. They are excellent
practice plants as well, since most tropical houseplants are far less
expensive than finished temperate zone bonsai trees.
Most indoor bonsai need to be near a bright window - not hot
sun, but bright indirect light - and appreciate good humidity, which
can be increased by keeping them on gravel trays filled with water so
that the pots sit above the water. All indoor bonsai will need water
before the soil goes completely dry. And because of the limited
amount of soil in a bonsai pot, it is important to fertilize often to
replenish the soil, feeding a bit less in winter when the plants are
in a slower growing season.
An excellent book to get started in indoor bonsai is INDOOR
BONSAI, by Paul Lesniewicz, Blandford Press, c1985, distributed by
Sterling Publishing Co., Inc., 2 Park Avenue, New York, New York
10016, which describes in detail the specific needs of many kinds of
suitable indoor plants for bonsai, complete with pictures and helpful
line drawings demonstrating pruning and wire techniques.
- - - - - - - - - -

SOURCES FOR GETTING STARTED IN BONSAI:

BOOKS (Many books not published in the United States are available
from bonsai supply stores listed above):
BONSAI: The Art of Growing and Keeping Miniature Trees, by
Peter Chan, Quintet Publishing Ltd., London, c1985. Superlative
large format book with excellent color photos as well as ancient
Japanese prints. Unsurpassed for culture and techniques, aesthetics,
styles, etc. Recommended by experienced growers.
THE ESSENTIALS OF BONSAI, by the editors of Shufunotomo, Timber
Press, Portland, Oregon, in cooperation with the American
Horticultural Society, c1982. Excellent color book with many
drawings, particularly good for explaining the classification of
styles, complete with pictures of each along with their Japanese
names. Good cultivation and techniques.
CHINESE BONSAI: The Art of Penjing, by Ilona Lesniewicz and Li
Zhimin, Blandford Press, distributed by Sterling Publishing Co.,
Inc., 2 Park Avenue, New York, New York 10016, c1988. Large format
color book that explains and depicts the Chinese style of bonsai that
incorporates landscapes and often figurines. Pictures good, but not
much in the way of culture.
- - - - - - - - - -