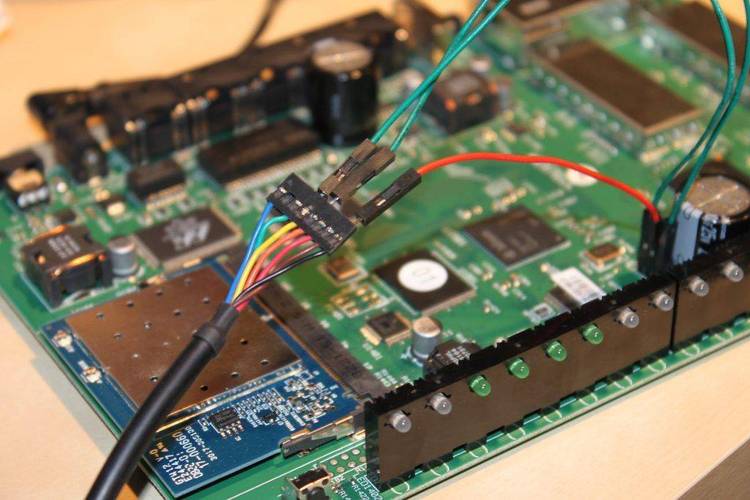 Contents of the FIFO.DOC file

If your computer includes a 16550A UART, chances are you'll get faster
throughput during your communications sessions if your software takes
advantage of it. To experiment with the UART in your machine, you can
use the DEBUG script shown in Figure 1 to generate a small program
called FIFO.COM. You simply run FIFO.COM once when you turn on your PC
and it activates the FIFO buffers in the UART, displaying what type of
UART you have in your machine, 8250 or 16550 or 16550A.
We emphasize the word experiment because some communications
programs, written before the introduction of the 16550A, might lock up
when the UART activates the previously unused upper bits of the
Interrupt ID Register. Even if your communications software doesn't
lock up with the FIFO buffer activated (and most don't) you still
won't get the full benefit of the FIFO buffer unless the program makes
use of it.
Programs not specifically written for the 16550A won't move
data in large blocks the way more modern programs do, and FIFO.COM
can't make your communications program recognize the UART or utilize
its FIFO buffer better. However, activating the buffer with FIFO.COM
can potentially eliminate problems of overrunning the UART,
particularly in a PC on the receiving side of a high-throughput file
transfer. Although it may help in this way, FIFO.COM mainly
demonstrates how programmers can activate the buffer.
The NS16550AF UART (Universal Asychronous
Receiver/Transmitter) contains two 16-byte FIFO (first in, first out)
buffers. Slower machines, like an 8-MHz AT, using fast modems need
these buffers, as do faster machines, like a 33-MHz 386, that attempt
to run other programs in a multitasking mode while using asynchronous
communications. The interrupts generated by communications sessions
can have a serious impact on the effectiveness of computers running
multitasking operations. Programs in other sessions suspend
processing, displays don't update, and characters typed at the
keyboard don't register while the CPU services the UART.
The 16-byte FIFO buffers reduce the interrupt activity of the
CPU because they can hold more data before generating an interrupt
requesting a transfer. This makes it easier for slower CPUs to avoid
dropping characters when they receive a fast stream of data. You can
set the receive FIFO buffer to receive 1, 4, 8, or 14 characters
before the UART generates an interrupt.
If your computer contains a 16550 UART instead of the 16550A
or AF, be aware that the plain 16550 was flawed and will not work
correctly if the FIFO buffers are activated. When you buy a new
computer, make sure the manufacturer either sockets the UART or
installs the new 16550A UART. If you can install the UART yourself, it
costs only about $12. The 16550A UART is especially useful for
communicating with high-speed modems because, with the advent of
V.32bis modems, you can now enjoy a carrier rate of 14,400 bits per
second between modems. With V.42bis data compressions of 4 to 1, you
must set the DTE (Data Terminal Equipment) speed of the RS-232C link
to 57,600 bps for optimum performance during file transfers. Slower
PCs cannot handle the high RS-232C DTE speed without the 16550A UART.
If you want more information on programming the 16550A UART,
National Semiconductor makes available a book called Data
Communications: Local Area Networks: UARTs. The book sells for $10 and
you can call National Semiconductor at 408-721-5000 to ask about its
availability.

HOW TO GET FIFO.COM
You can download FIFO.COM from library 2 of PC MagNet's Utilforum/Tips
forum (type GO PCM:TIPS from PC MagNet or CompuServe to get there) or
create it using the DOS DEBUG program.
Assuming DEBUG is available in the C: root directory, redirect
the following text to DEBUG by typing