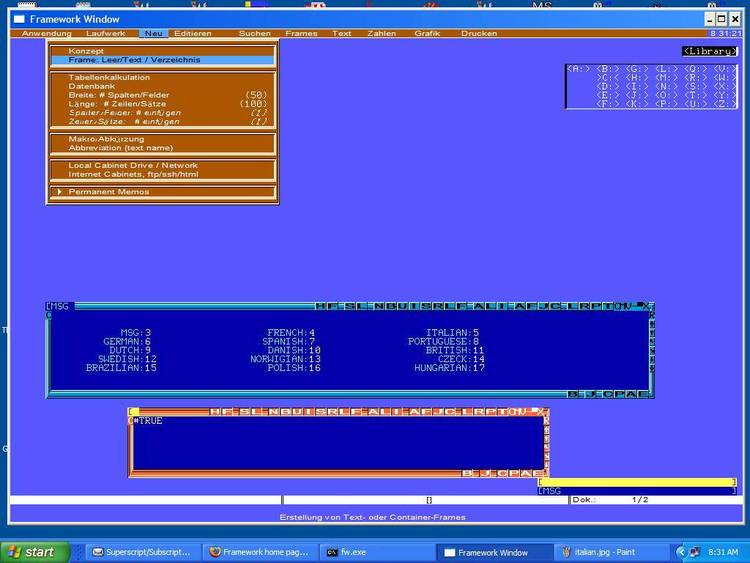 Contents of the 3_D_ARRA.TXT file

Arrays in 3-D, The Sequel
A Three-Dimensional Spreadsheet for Data Management

In the last issue of TechNotes/dBASE IV, a technique for simulating
three-dimensional arrays was introduced (see "Arrays in 3-D", December
'89). This technique gives the programmer the ability to expand a
two-dimensional array into another dimension by inserting a special
string of characters called a template string into each of the array's
elements. A pseudo-dimension is derived by storing and referencing
data in subsections of these template strings. This is made possible
by special markers arranged on the template strings that denote an
indexed position for each data pseudo-element.

In this article we will present a sample application that utilizes
this concept. This application allows the user to add, delete,
examine and edit records in a Student Record database. The user can
have any five (or fewer) student records on the screen simultaneously,
each in its own two-dimensional 8 x 6 grid in which data fields are
arranged as "cells". In this way, each of the five grids serves as a
spreadsheet that can be traversed and edited in the same manner as any
normal spreadsheet. The user can not only navigate from cell to cell
within a grid, but from grid to grid as well, allowing independent
editing of more than one record at a time. And the grids are arranged
on the screen such that the user sees them as residing on different
"levels", making the 3-D arrangement of data clear and obvious.

Of course, the application included in this article does not come
close to demonstrating all of the uses of a three-dimensional array.
But it does hint at some of the possiblities of this remarkable data
structure.

Let's take a look at how a typical screen might look while using this
application.

The program that produces this 3-dimensional spreadsheet is named
"Arry3.PRG". The "three-dimensional" array it uses is derived from a
two-dimensional array named Sample. Sample has a true dimension of 8
x 6, denoting eight rows and six columns, and is declared in the
program as SAMPLE[8, 6].

The third dimension represents grid levels. In order to explain how
this is done, it might be useful to review a concept that was
introduced in last month's article: the template string.

Each of the data elements in the two-dimensional array Sample is
filled with a copy of this template string:

An element of data that is entered into a spreadsheet grid is placed
inside this template string next to the number that corresponds to the
level of the grid. For instance, William's grid is on level three;
therefore, any test score entered into any cell of his spreadsheet
grid will be placed in the template string right after the "%3 "
substring. Suppose that William's score on his third History exam was
89.07, with a grade of B+. The student whose grid is on level one got
a grade that begins with "68' (let's suppose it is 68.50, and yielded
a C-). The grid on level two is blank, and let us also assume that
the grids on levels four and fivenot visible right noware blank as
well. Under these circumstances, the template string at Sample[3, 1]
should look like this:

Another way of looking at this is by considering what happens when a
particular grid is presented on the screen. If the grid on level one
is presented, the template string sections shown on the screen will be
the ones between the index markers "%1 " and "%2 ". In William's
grid, on level three, only those sections between "%3 " and "%4 " are
shown.

In order to accommodate the kind of data manipulation done in this
program, a special kind of database file structure was employed.
Since data is entered and massaged in a row x column x grid-level
format, it was deemed simplest to create a database with a separate
field to accommodate each individual cell in a spreadsheet grid. Each
grid has six classes (column dimension) and eight test grades per
class (row dimension); therefore, there are six types of class fields,
and eight fields in the database for each class type, making 6 x 8 =
48 fields in all for recording grades. In addition, there are FName,
LNname and Student_ID fields for student identification. There is
also a logical field called XOpen to indicate whether the record is
currently in use.

The name of the database file is Students.DBF. Here is a partial
representation of the structure:

For an example of how these fields work in conjunction with the 3-D
array, let's examine the "TRIG" fields. As with the "HIST" fields,
there are eight in all, each with a different integer character (1
through 8) attached to the end of its name. This is so that an index
in the program can be used to access the database fields in a manner
similar to the way array elements are accessed.

Suppose that an integer index variable named XRow was used to indicate
which row position we were on in a grid at a given moment. The
following code would be used to construct the name of the
corresponding TRIG field in which that grade entry was stored:

For example, if the value of xRow happens to be 4, then the
constructed name of the relevant field would be the character string
"TRIG4", which is now contained in the variable Stem. To reference
the TRIG4 field, the macro substitution technique can be used:

The variable mHold should now contain the contents of Trig4. This
variable can now be inserted into the 3-D array using xRow as a
referencing index number, ensuring that it will be put into the proper
corresponding row position. (See PROCEDURE GetRec in Arry3.PRG.)

How to Use the Program

To run the program, simply put the program file Arry3.PRG and the
database file Students.DBF into your default directory and enter "DO
ARRY3" at the dot prompt. After compiling, the first grid will be
presented, along with the Main Instruction List at the bottom of the
screen.

The grid shown here is on level one. To exercise the "Next" option,
press the Down-Arrow key; this will cause the grid on level two to be
displayed over the level one grid. To move on to the grids on levels
three, four and five, keep pressing the Down-Arrow key. To move back
in the opposite direction, press the Up-Arrow key (the "Previous"
option).

Pressing the F2 Key (the "Load Rec" option) will present two input
windows to allow the entry of a student's last name and/or the student
number. If either or both of these are entered, there will be a
search of the database for a corresponding record. If the record is
found, it will be loaded into the grid, and that record's XOpen field
will be set at TRUE (meaning the record is now in ACTIVE status).

Pressing the F3 key (the "Put Away" option) will present options to
"Save, Continue", "Save, Clear Grid", "Abandon Grid" and "Delete
Record".

The "Save, Continue" option will do one of two things. If the grid
is empty, it will prompt the entry of the First Name, Last Name and
Student Number of a new student and create a new student record. If
the grid is already occupied with a record, the program will write the
grid's current contents to that record. In either case, the grid will
not be cleared out or reset to empty.

The "Save, Clear Grid" option will do exactly the same thing as the
"Save, Continue" option, but will cause the grid to be cleared out and
reset to empty afterwards. If a record was active in the grid, that
record will be closed by setting the XOpen field to FALSE, meaning
INACTIVE.

The "Abandon Grid" option will cause the grid to be cleared, and will
not save the current contents of the grid.

The "Delete Record" option will tag the record on the grid as deleted,
then clear the grid.

Now let's return to the Main Instruction List. If the Esc key is
pressed (the "Edit" option) the program switches into a different
mode. Until now we have been operating the program in the Grid
Navigation mode; in this mode, we were able to go from grid to grid,
loading records into them, saving records from them, and so on. Upon
pressing the Esc key, we enter the Grid Editing mode.

In the Grid Editing mode, whatever grid we are on is treated literally
as a small spreadsheet. The cells in this spreadsheet can be
traversed in any direction using the arrow and tab keys. The user is
free to input anything into any cell, provided that the entry does not
exceed the cell's capacityeight standard keyboard characters, such as
alphanumerics or punctuation marks.

To exit from the Grid Editing mode, the user has only to press the Esc
key again; this will return the program to the Grid Navigation mode.
The changes just made can then be written to the database file with
the F3 ("Put Away") option.

The main purpose of the program featured in this article is to
demonstrate an application for the three-dimensional array data
structure, and to present this structure in a visually pleasing way.

In our example, the 3-D array was used for appending and massaging the
data in a .DBF file interactively.

Of course, this is by no means the only way in which a 3-D array can
be utilized. Any program that manipulates data variables along three
different index-like parameters is a likely candidate; and this may
not necessarily be interactive, or even visible to the user. Some
examples might be programs that manipulate data pertaining to
3-dimensional structures like geological contour maps or multi-level
inventory shelving systems.

Whatever the use a programmer may have for arrays, he or she should be
aware that with a little extra programming, dBASE IV has the
flexibility to expand the capabilities of its array structures in
highly useful ways.

DEFINE MENU FSaver && Menu for deciding what to do with the
&& current grid.

mDecide = SPACE(3) && Variable that is trapped by PROCEDURE
&& ExitTrap for menu FSaver.
SELECT 1
USE STUDENTS EXCLUSIVE && Database with student information.
REPLACE ALL XOPEN WITH .F. && Start with no records "active".
GO TOP