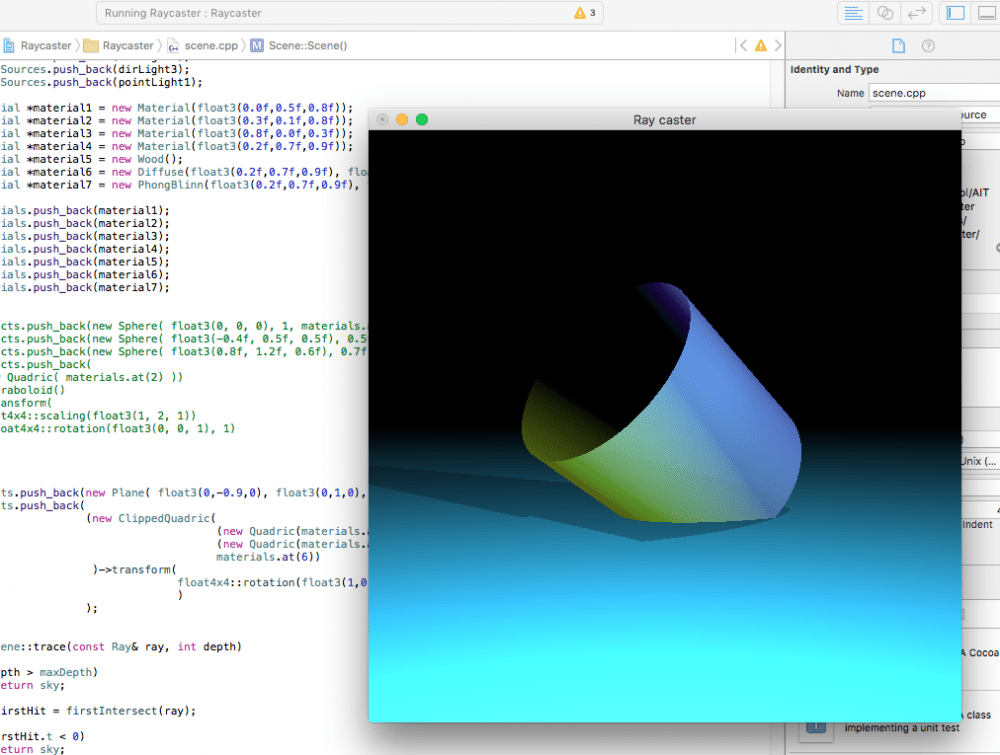 This is the source for the X-Sharp 3-D animation package, as
presented in the Graphics Programming column in Dr. Dobb's Journal,
as of the April 1992 issue. A couple of bugs in the code from the
April 1992 column are fixed in this archive. The code has been tested
with Borland C++ 3.0 and TASM 3.0. To make X-Sharp, run K.BAT.

Unpack this archive with PKZIP -d; the ball generation code belongs
in the .\BALL subdirectory, and, because it has some of the same
filenames as the main directory, problems will result without -d.

Files in this archive:

The subdirectory .\BALL contains the source code and executable for
the program GENBALL, which creates the vertex and face lists for a
ball made from rectangular faces (BALVERT0.INC was created by GENBALL).
Remake GENBALL by running K.BAT in the .\BALL directory. See the
12/29/91 log entry for details.

Comments and questions may be directed to me in the following ways:

Bix is the best way to get hold of me.

This material may be used freely; it is provided free of charge, as
are responses to questions and comments, within reason. Should the
spirit move you, a contribution to the Vermont Assocation for the
Blind and Visually Impaired, sent care of Dr. Dobb's Journal, myself,
or directly to VABVI, would be appreciated, and would motivate me to
keep enhancing X-Sharp.

----------
Altered ConcatXforms to add in the translation element from matrix #1
only when multiplying by the fourth column of matrix #2, because only
the fourth column has a 1 at the bottom. This fixes a bug in earlier
versions that showed up when a world->view transformation involving
translation was used.

----------
Converted XformVec and ConcatXforms to assembly language, reducing
transformation and concatenation time to 5% or less of total time.

----------
Converted sin() and cos() calls to calls to the assembly language
function CosSin(), which performs a table look-up. Changed angle
representations from radians to tenths of degrees to facilitate table
look-up and to maximize accuracy.

----------
Deleted one cube from the animation, and substituted a ball. The
ball has a radius of 25, slightly larger than the cube it replaces.
It has 6 bands of 12 facets each, for a total of 72 faces,
approximately doubling the number of polygons in the animation, and
has 62 vertices, increasing the number of vertices by more than 50%.
Added INITBALL.C to initialize the ball, and added a call to
InitializeBalls() to create the ball in main(). Only one ball is
created, but more balls could easily be added, and the size of and
number of bands in the ball(s) could easily be changed.

The program GENBALL, in .\BALL, generates all vertex and face info
for a generic ball (it doesn't generate the color info, which varies
from instance to instance). The number of bands of faces and the
size of the ball are prompted for when GENBALL is run. The output of
GENBALL with 6 bands and a radius of 25 is in BALVERT0.INC, and is
included in INITBALL.C, which initializes a ball for use in the
animation program. To change the size, just regenerate BALVERT0.INC
by running GENBALL with bands = 6 and the desired radius. To change
the number of bands, run GENBALL with the desired number of bands and
radius, and then change the Colors array in INITBALL.C to have one
color entry for each face in the new ball. (The number of faces is
shown as a define at the top of the output file from GENBALL.)
Additional balls may be added by changing NUM_BALLS, and by adding a
new entry to each array at the top of GENBALL.C.

----------
Changed object list from an array to a linked list that is sorted
in back-to-front order after each set of moves, so drawing the list
in order performs proper hiding of objects.

----------
Added a center (0,0,0) point to each object, which is transformed into
view space each time the object is transformed. This is used for
Z-sorting objects for drawing precedence purposes, and can also be
used for collision detection and the like.