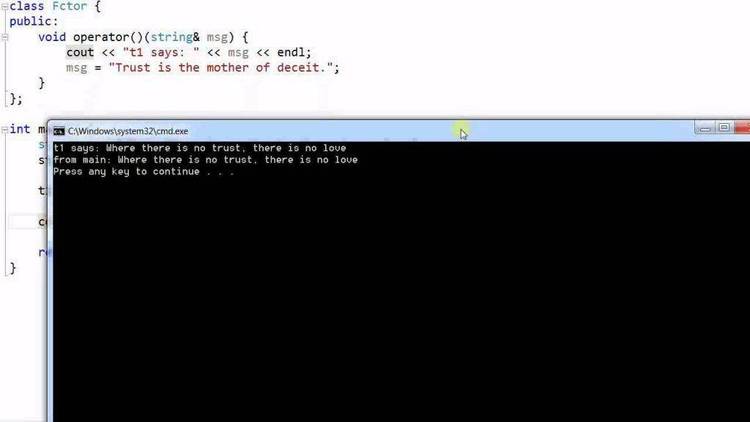 Contents of the THREADS.DOC file

Permission is granted to use copy and distribute the
information contained in this file provided that this
copyright notice is retained intact and that any software
or other document incorporating this file or parts thereof
makes the source code for the library of which this file
is a part freely available.


1. Introduction.
----------------
Class DOSThread provides a framework for writing DOS applications
which consist of multiple (pseudo-)parallel "threads" of execution.
DOS was not designed as a multithreading operating system (in fact,
it actively hinders multithreading by being non-reentrant) but this
class allows you to create multithreaded DOS applications without
worrying about such problems (although you should read section 11
for some important caveats concerning direct calls to the BIOS).

To create a thread using this class, you must derive a class from
it which contains the code you want to be executed in a member
function called "main". All you have to do then is declare an
instance of your derived class and then call the member function
"run" to start it running. Each thread will be executed in bursts
of 1 clock tick (55ms) at a time before being suspended to allow
the other threads a chance to execute. The length of the timeslice
can be changed if necessary using the member function "timeslice".
If required, timeslicing can be disabled entirely, in which case
it is up to each thread to relinquish the use of the processor at
regular intervals so that the other threads get a chance to run.

Two additional classes (DOSMonitor and DOSMonitorQueue) allow you
to derive monitor classes of your own to facilitate communication
between threads. A monitor will normally contain data structures
which can be accessed by several threads. You can guarantee that
only one thread at a time is executing a monitor member function
which accesses the data by calling the member function "lock" at
the start of the monitor function. If any other thread is already
executing a monitor function guarded by a call to "lock", the
current thread will wait until it is safe to proceed. At the end

of the monitor function, you should call "unlock" to allow any
waiting threads to proceed. Monitors can also contain instances
of DOSMonitorQueue which allow threads to suspend themselves in a
monitor function until some condition has been fulfilled (e.g.
that a buffer isn't empty). Some other thread executing within
the monitor can resume any suspended threads when the condition
is fulfilled (e.g. after a data item has been put into an empty
buffer). A template class which implements a bounded buffer is
included in this distribution. This is probably the commonest
use of monitors in most applications, so it may well not be
necessary to define any other monitor classes of your own.

If you find this class useful or have any suggestions as to how it
can be enhanced, please contact the author at one of the addresses
given above. E-mail and postcards will both be welcome!

Having created a derived thread class, you can then declare instances
of this class in your program, as for example:

The threads you declare will not be executed until you call the member
function "run", as follows:

"Run" returns a result to the calling program which is TRUE (1)
if the thread was started successfully, and FALSE (0) if it could
not be started (either because there was insufficient memory to
create the necessary data structures or because it has already
been started). Note that you cannot call "run" from your thread
constructor since the virtual function "main" is not accessible
until you have finished executing the constructor.

Once a thread has been started successfully, it will be executed
in parallel with the main program. The main program effectively
becomes another thread (although it has no name, and it can only

make use of the static functions "pause" and "delay" described
below).

The default is for each thread to be granted a "timeslice" of one
clock tick (55ms). If a thread is still running when its timeslice
expires, it is moved to the back of the queue of ready-to-run threads
and execution of the next thread in the queue is then resumed. The
static member function "timeslice" can be used to change the length
of the timeslices used. "Timeslice" requires an unsigned integer
parameter specifying the desired timeslice length in clock ticks,
as for example:

If the parameter is zero, timeslicing is disabled. In this case
it is up to individual threads to relinquish control to each other
by calling a member function which will cause another thread to be
scheduled. A member function "pause" is provided for just this
purpose, and is described below.

"Timeslice" must be called before any threads are declared; as soon
as the first thread has been declared, calls to "timeslice" will be
ignored. This means you cannot dynamically change the length of the
timeslice during execution of the program.

This is a static member function, so is can be called from any
point in a program as "DOSThread::pause". Even if you are using
timeslicing, it is a good idea to call "pause" if your thread is
temporarily unable to proceed (e.g. it is waiting for a key to
be pressed), as otherwise it will do nothing useful for several
milliseconds until its timeslice expires and another thread gets
a chance to run.

You can also make your thread wait for a fixed time by using the
static member function "delay", specifying the delay period as
a number of 55ms clock ticks:

Note that "pause" and "delay" are both static member functions
which always affect the current thread. This means that you are
not able to "pause" or "delay" any other thread. It also means
that you can call these functions from the main program if you
need to.

When "MyThread::main" returns, the thread terminates. You can also
terminate a thread explicitly using the member function "terminate".
If another thread (or the main program) wants to terminate "thread1",
it can do it like this:

This is potentially problematical, as you have no idea what "thread1"
is doing at the time. A thread can also terminate itself:

which has the same effect as returning from the main function of
the thread.

The flag will remain set so that other threads can also inspect it.
Alternatively, you can use the static function "cancelbreak", which
is identical to "userbreak" except that it also resets the internal

flag. This allows an individual thread to deal with a control-break
event without any other threads being able to deal with the same event
as well as providing a means for resetting the flag. If threads do
not use either of these functions, control-breaks will be ignored
completely.

The parameter N is the DOS code defining the cause of the error.
"DOSerror" should return a result of "DOSThread::IGNORE" to ignore
the error, "DOSThread::RETRY" to retry the operation that caused the
error, or "DOSThread::FAIL" to fail the operation. Note that during
critical-error handling, the only DOS services that you can use are
functions 00 to 0C. Class DOSThread will intercept and ignore any
other functions, as they would otherwise cause DOS to crash.

The function "DOSerror" should never be called directly; it will be
called automatically if an error occurs during execution of a thread.

The result is a value of type DOSThread::State, which will be one
of the following values:

update, you may well complete your update using out-of-date
values when your thread resumes, which means that the global
variables end up in an inconsistent and incorrect state.

The base class DOSMonitor provides a basis for developing classes
which allow safe interthread communication. All you have to do is
to derive a class from DOSMonitor which encapsulates any data which
will be updated by more than one thread and which provides access
functions to access the data. Each access function should begin
by calling the member function "lock" and end by calling "unlock".
This will guarantee that only one thread at a time is executing an
access function in any individual monitor. The general structure
of a monitor access function is therefore as follows:

Note that suspend should be called from within a loop; since
"resume" will restart all the threads in the specified queue,
it is not guaranteed that the condition for which the thread
is waiting will still be true at the time the thread actually
resumes execution. Thus to suspend a thread until a counter
is non-zero, code such as the following should be used:

As an example, consider a monitor to provide a 20-character
buffer to transfer data from one thread to another. It might
look something like this:

The class constructor initialises "count" to zero to indicate an
empty buffer and sets "in" and "out" to point to the start of the
buffer. Threads must then call "get" and "put" in order to access
the contents of the buffer. Two DOSMonitorQueue instances are
used; "full" is used to suspend threads which call "put" when the
buffer is full, and "empty" is used to suspend threads which call
"get" when the buffer is empty. The code for "get" would be like
this: