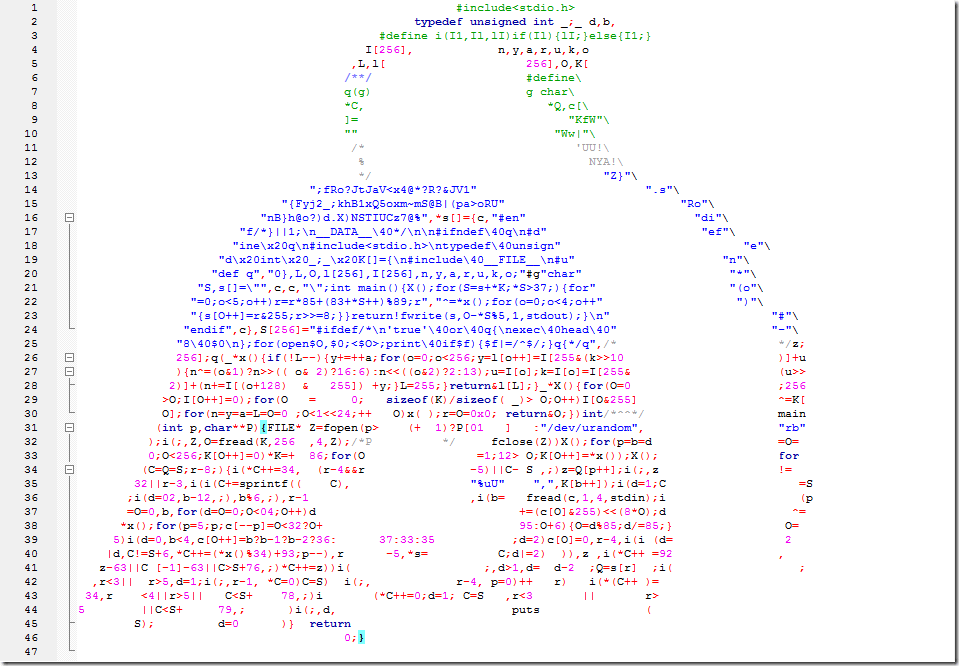 How it was started:

The original inspiration of the International Obfuscated C Code
Contest came from the Bourne Shell source and the finger command as
distributed in 4.2BSD. If this is what could result from what some
people claim is reasonable programming practice, then to what depths
might quality sink if people really tried to write poor code?

I put that question to the USENET news groups net.lang.c and
net.unix-wizards in the form of a contest. I selected a form similar
to the contest (Bulwer-Lytton) that asks people to create the worst
opening line to a novel. (that contest in turn was inspired by disgust
over a novel that opened with the line "It was a dark and stormy
night.") The rules were simple: write, in 512 bytes or less, the worst
complete C program.

Thru the contest I have tried to instill two things in people. First
is a disgust for poor coding style. Second was the notion of just how
much utility is lost when a program is written in an unstructured
fashion. Contest winners help do this by what I call satirical
programming. To see why, observe one of the definitions of satire:

Keen or energetic activity of the mind used for the purpose
of exposing and discrediting vice or folly.

The authors of the winning entries placed a great deal of thought into
their programs. These programs in turn exposed and discredited what I
considered to be the programmer's equivalent of "vice or folly".

There were two unexpected benefits that came from the contest winners.
First was an educational value to the programs. To understand these C
programs is to understand subtle points of the C programming language.
The second benefit is the entertainment value, which should become
evident as you read further!

Suggestions on how to understand the winning entries:

You are strongly urged to try to determine what each program will
produce by visual inspection. Often this is an impossible task, but
the difficulty that you encounter should give you more appreciation
for the entry.

If you have the energy to type in the text, or if you have access to
a machine readable version of these programs, you should next consider
some preprocessing such as: