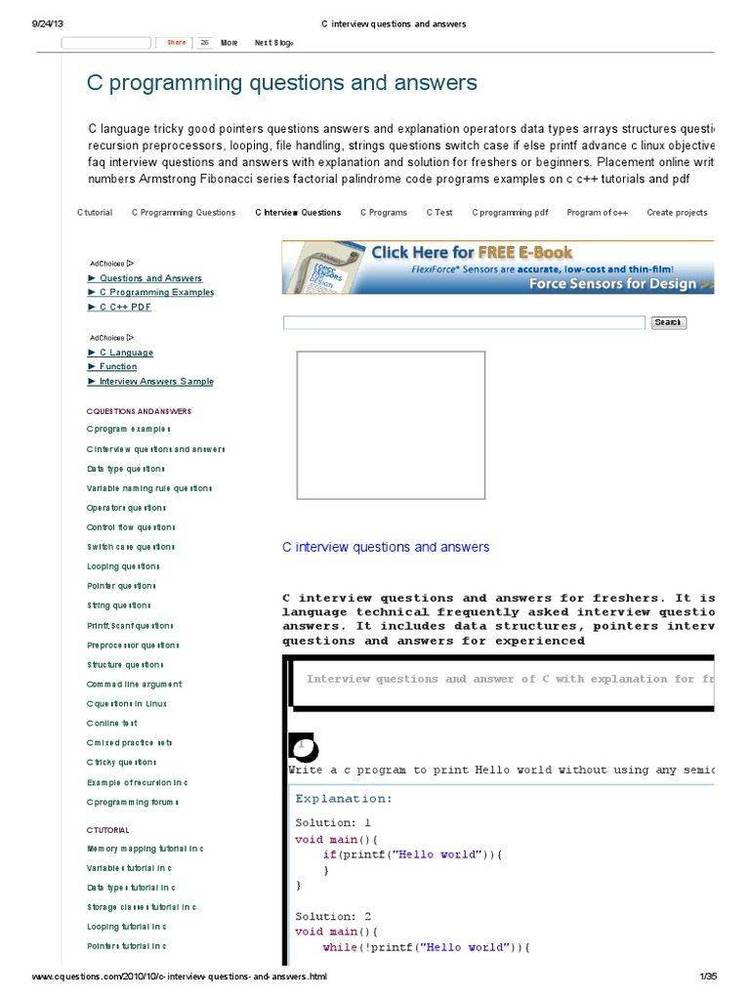 Contents of the FAQ-C.TXT file

1. What is this infamous null pointer, anyway?

A: For each pointer type, there is a special value -- the "null
pointer" -- which is distinguishable from all other pointer values
and which is not the address of any object.

A: A constant 0 in a pointer context is converted into a null pointer
at compile time. A "pointer context" is an initialization,
assignment, or comparison with one side a variable or expression of
pointer type, and (in ANSI standard C) a function argument which
has a prototype in scope declaring a certain parameter as being of
pointer type. In other contexts (function arguments without
prototypes, or in the variable part of variadic function calls) a
constant 0 with an appropriate explicit cast is required.

A: NULL is simply a preprocessor macro, #defined as 0 (or (void *)0),
which is used (as a stylistic convention, in favor of unadorned
0's) to generate null pointers,

4. How should NULL be #defined on a machine which uses a nonzero bit
pattern as the internal representation of a null pointer?

A: The same as any other machine: as 0 (or (void *)0). (The compiler
makes the translation, upon seeing a 0, not the preprocessor.)

5. If NULL were defined as "(char *)0," wouldn't that make function
calls which pass an uncast NULL work?

A: Not in general. The problem is that there are machines which use
different internal representations for pointers to different types
of data. A cast is still required to tell the compiler which kind
of null pointer is required, since it may be different from
(char *)0.

6. I use the preprocessor macro "#define Nullptr(type) (type *)0" to
help me build null pointers of the correct type.

A: This trick, though valid, does not buy much.

7. Is the abbreviated pointer comparison "if(p)" to test for non-null
pointers valid? What if the internal representation for null
pointers is nonzero?

A: The construction "if(p)" works, regardless of the internal
representation of null pointers, because the compiler essentially
rewrites it as "if(p != 0)" and goes on to convert 0 into the
correct null pointer.

A: Either; the distinction is entirely stylistic.

9. But wouldn't it be better to use NULL (rather than 0) in case the
value of NULL changes, perhaps on a machine with nonzero null
pointers?

10. I'm confused. NULL is guaranteed to be 0, but the null pointer is
not?

A: A "null pointer" is a language concept whose particular internal
value does not matter. A null pointer is requested in source code
with the character "0". "NULL" is a preprocessor macro, which is
always #defined as 0 (or (void *)0).

11. Why is there so much confusion surrounding null pointers? Why do
these questions come up so often?

A: The fact that null pointers are represented both in source code,
and internally to most machines, as zero invites unwarranted
assumptions. The use of a preprocessor macro (NULL) suggests that
the value might change later, or on some weird machine.

A: A simple rule is, "Always use `0' or `NULL' for null pointers, and
always cast them when they are used as arguments in function
calls."

13. Given all the confusion surrounding null pointers, wouldn't it be
easier simply to require them to be represented internally by
zeroes?

A: What would such a requirement really accomplish?

A: Machines manufactured by Prime and by Honeywell-Bull, as well as
Symbolics Lisp Machines, have done so.

15. I had the definition char x[6] in one source file, and in another I
declared extern char *x. Why didn't it work?

A: The declaration extern char *x simply does not match the actual
definition. Use extern char x[].

A: Not at all. Arrays are not pointers.

17. You mean that a reference like x[3] generates different code
depending on whether x is an array or a pointer?

18. So what is meant by the "equivalence of pointers and arrays" in C?

A: An lvalue of type array-of-T which appears in an expression decays
into a pointer to its first element; the type of the resultant
pointer is pointer-to-T.

19. Why are array and pointer declarations interchangeable as function
formal parameters?

A: Since functions can never receive arrays as parameters, any
parameter declarations which "look like" arrays are treated by the
compiler as if they were pointers.

20. Someone explained to me that arrays were really just constant
pointers.

A: An array name is "constant" in that it cannot be assigned to, but
an array is _not_ a pointer.

A: Yes, array subscripting is commutative in C. The array
subscripting operation a[e] is defined as being equivalent to
*((a)+(e)).

22. My compiler complained when I passed a two-dimensional array to a
routine expecting a pointer to a pointer.

A: The rule by which arrays decay into pointers is not applied
recursively. An array of arrays (i.e. a two-dimensional array in
C) decays into a pointer to an array, not a pointer to a pointer.

A: Usually, you don't want to. Consider using a pointer to one of the
array's elements instead.

24. How can I dynamically allocate a multidimensional array?

A: It is usually best to allocate an array of pointers, and then
initialize each pointer to a dynamically-allocated "row." See the
full list for code samples.

A: The operations implied by the postincrement and postdecrement
operators ++ and -- are performed at some time after the operand's
former values are yielded and before the end of the expression, but
not necessarily immediately after, or before other parts of the
expression are evaluated.

A: There is a special exception for those operators, (as well as ?: );
left-to-right evaluation is guaranteed.

A: In 1983, the American National Standards Institute commissioned a
committee, X3J11, to standardize the C language. After a long,
arduous process, the committee's work was finally ratified as an
American National Standard, X3.159-1989, on December 14, 1989, and
published in the spring of 1990. The Standard has also been
adopted as ISO/IEC 9899:1990.

A: Copies are available from the American National Standards Institute
in New York, or from Global Engineering Documents in Irvine, CA.
See the unabridged list for addresses.

29. Does anyone have a tool for converting old-style C programs to ANSI
C, or for automatically generating prototypes?

31. My ANSI compiler complains about a mismatch when it sees

A: You have mixed the new-style prototype declaration
"extern int func(float);" with the old-style definition
"int func(x) float x;". The problem can be fixed by using either
new-style (prototype) or old-style syntax consistently.

32. I'm getting strange syntax errors inside code which I've #ifdeffed
out.

A: Under ANSI C, #ifdeffed-out text must still consist of "valid
preprocessing tokens." This means that there must be no
unterminated comments or quotes (i.e. no single apostrophes), and
no newlines inside quotes.

33. Why does the ANSI Standard not guarantee more than six monocase
characters of external identifier significance?


A: The problem is older linkers which cannot be forced (by mere words
in a Standard) to upgrade.

A: It was deleted from the final versions of the standard because of
widespread complaint and the near-impossibility of defining it
properly.

35. What are #pragmas and what are they good for?

A: The #pragma directive provides a single, well-defined "escape
hatch" which can be used for extensions.

36. How can I write a generic macro to swap two values?

A: There is no good answer to this question. The best all-around
solution is probably to forget about using a macro.

37. I have some old code that tries to construct identifiers with a
macro like "#define Paste(a, b) a/**/b", but it doesn't work any
more.

A: Try the ANSI token-pasting operator ##.

38. What's the best way to write a multi-statement cpp macro?

39. How can I write a cpp macro which takes a variable number of
arguments?

40. How can I write a function that takes a variable number of
arguments?