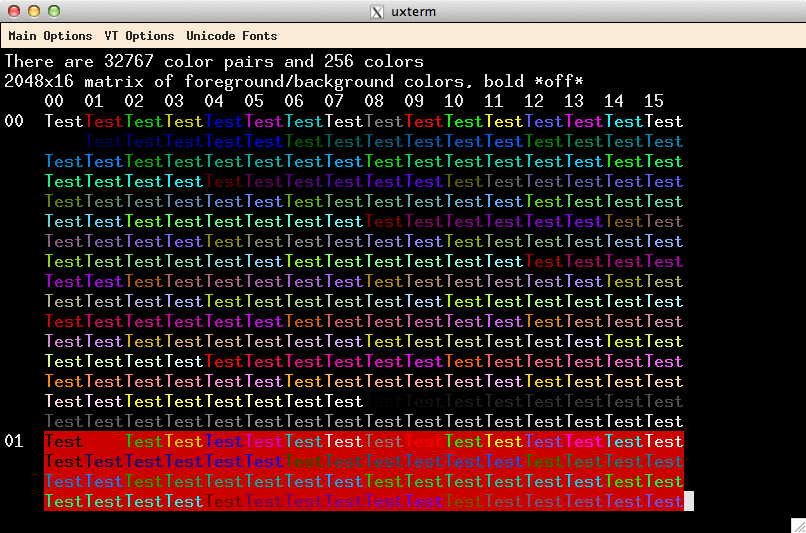 Contents of the CVT100.DOC file


CVT100 is a simple VT100 emulator programmed exclusively
in Turbo C 2.0. *All* of the code is in Turbo C. There are
no assembler routines or functions requiring an assembler.
All of the code is contained in 7 modules. These are:

This is version 2.0 of the CVT100 emulator. Version 1.0 of the
emulator was designed with the following objectives in mind:

1) To provide a public domain source for a VT100
emulator written in Turbo C code that was easy to
understand and modify,

2) To show the power and flexibility of Turbo C without
having to resort to assembly language routines,

3) To aid (however slightly) in the development of a C
version of Kermit for MS DOS systems,

4) To provide a terminal emulator that takes a very
small amount of memory and is capable of running in
a well behaved window in Windows or DesqView (less
than 40k).

5) Optimize the performance of the video system for
operating environments such as MS Windows and
DesqView.

6) Provide public domain code showing a method of
designing a program achieving optimum output
under MS Windows or DesqView without sacrificing
performance as a standalone program under DOS.

7) Fix several bugs in the first version of CVT100.

8) Add a compile time DEBUG option that allows input
to the communications system to be taken from a
FILE rather than received characters from the
communications port.

The terminal emulator is menu driven. The top line of
the terminal screen is reserved as a status line. A list of
choices is displayed on the status line for setting the
various parameters concerning the different aspects of the


Function Key F6: This key will activate the Video setup
menu. Here the screen colors can be
set and the "snow" inhibit mode can be
set.

Function Key F7: This key when pressed enters the
keyboard setup menu. Here the
program's interpretation of the
backspace key can be set. The
keyboard can be programmed to produce a
'key-click' and the state of the
keypad can be defined.

Function Key F9: Function key F9 brings up a File menu.
The current settings for the terminal
can be saved in an initialization file
that is read when the program is
started. Also a log of incoming
characters can be controlled.

Function Key F10: This is used as the exit key. When
pressed this will close any open log
files and exit.

Characters are received via receiver interrupts
generated by the UART. The interrupt service routine (ISR)
for the incoming characters is a function of type interrupt
for Turbo C. Although any serious communications program
should have the transmission interrupts in assembler, this
program has been tested at 19,200 baud on a plain vanilla
4.77 Mghz PC with no loss of characters.

An XON/XOFF 'handshake' is used to control the flow of
characters to and from the host. An XOFF is transmitted to
the host when 75% of the communications circular buffer is
full. This will tell the host to stop transmitting
characters until an XON is transmitted to it. When the
buffer is back down to 25% full an XON will be sent to the
host signaling it that it is okay to begin transmission
again.

Version 2.0 of CVT100 also adds a debugging feature in
the communication system. Input can be taken from a file
and interpreted as received characters. Debugging is enabled
by a #define DEBUG in module COMIO.C.

Most video manipulations are done by reading and writing
directly to the screen's memory. This made it necessary to
provide "snow" protection on CGA systems, but much less time
is wasted on writing characters and attributes than using the
BIOS.

A check is done before each video memory access to
detect a control program such as Windows, DesqView, or
TopView. Each of these control programs will keep a video
"shadow" buffer for processes currently executing. The
address of this buffer can be queried and output directed to
this buffer instead of the actual screen. This will let
CVT100 run in a well behaved window in these environments.

Not only will CVT100 run in a well behaved window,
but CVT100 version 2.0 was designed to provide excellent
performance under these operating environments. CVT100
uses a simple character output buffering scheme. This scheme
improves the performance under MS Windows by %400 while
hardly changing operation under DOS alone.

There are several problems with the video system. A few
of the colors (Yellow foreground) do not work properly with
the emulation. The program tries to juggle various
attributes defined by the host's control commands and tends
to lose the defined color in the process.

The most controversial part of any terminal emulator
will usually be the setup of the IBM PC keyboard to try and
match the Digital Equipment Corporation VT keypad. Not an
easy task. This program tries to map as closely as possible
the keypad for an IBM PC to a DEC VT keypad. The results
are often better if NUM LOCK is left on through out the
entire session.

If you are unsatisfied with the layout of the keyboard
there are currently no means to assign keys any differently,
but that is why the source is provided with this program!
Check module KEYIO.C for changing the default setup.

This program can best be described as a compromise
between the desire to make the code as simple and straight
forward as possible and the complexities and intricacies of a
real life DEC VT100. So many things were left out of the
terminal emulation.

Of the things left out of the emulation most notable
will be printer output commands and double high/width
character lines. Local echo is also absent.

The emulator can not change the video from 80 to 132
columns and vice-versa when these commands are received from
the host. The commands are received and recognized but it
only changes the logical width of the screen held by the
emulation software. It seems as if every video board
manufacturer that has a board capable of switching to 132
column mode has a different method of changing into this
mode. However this mode can be utilized by setting the
screen to 132 columns *before* executing the program. Then
the video system of the emulator will properly use all of the
columns.

The setup information can be saved to a disk file when a
satisfactory setting has been reached. When the program is
executed it looks in the current directory for this file
named 'CVT100.SET' from which to load the setup parameters.
If this file is not found then default values are provided.
Currently the only way to have multiple setups is to have
them in separate directories that the program can be executed
out of.

Any time the program is exited the communications port
will be closed to prevent incoming characters generating
interrupts to ISR's which don't exist in memory any longer.
Additionally the log file will be closed if it is open on
program exit.

There are several errors which may cause the emulator to
force itself to exit. If memory can not be allocated from
the DOS heap for the screen save buffer then the program will
be terminated with an error message. Also the file IO
functions may terminate the program if a system error has
occurred on a read or write of a disk file. This could be
caused by a disk full error or fault media. *CAREFUL*
because the program does not currently trap the fatal error
interrupt and disk errors will produce the not-too-kind error
message:

Choosing Abort will cause the terminal to exit without having
turned off communications interrupts. This will cause a
quick system lockup if a character is received by the UART.

The emulation has been tested primarily on 2 systems.
The first and most important was a Digital VAX running VMS.
There are several utilities running under VMS that try even
commercial VT100 emulators. Most notable of these utilities
is the VAX TPU editor, thus importance was given to getting
this version of a VT100 emulator working under the VAX TPU
editor as well as the EDT editor provided with VAX VMS.
Other exceptionally difficult programs to get an emulator
running under were the VAX/VMS debugger in full screen mode,
VAX/VMS mail, and programs using the VAX/VMS FMS screen forms
manager.

Extensive testing was also done on the free practice
forum on CompuServ. (GO PRACTICE, I even got a good working
knowledge of the new SIG forum commands) This turned out to
be a piece of cake after working with many of the VAX/VMS
programs. As far as I can tell the CompuServ host computers
will only send cursor addressing commands and screen clearing
commands to terminals set up to be VT100's. Therefore if
your terminal is set up to be an 80 X 24 VT100 to CompuServ
(GO TERMINAL) this VT100 emulator will provide thorough
terminal emulation.

The VT100 emulation is based heavily on two versions of
Kermit. The most notable version of Kermit was MSKermit
version 2.30 written in Microsoft Macro Assembler 3.0.
CKermit for Unix was also used for program design and
nomenclature. Therefore this Copyright appears as required.

Copyright (c) 1981, 1988
Trustees of Columbia University in the City of New York

Permission is granted to any individual or institution
to use, copy, or redistribute this program and
documentation as long as it is not sold for profit and
as long as the Columbia copyright notice is retained.

This program would have never got off the ground if it
was not for the work put into a VT102 emulator written
primarily by J. R. Doupnik of Utah State University for
MSKermit. Many other people have worked on MSKermit,
including Frank da Cruz and Christine Gianone of Columbia
University. A list of these people would have been
incomplete and is not attempted here though their
work has been appreciated greatly by me over the years. If
any questions came up regarding a particular facet of VT100
emulation I would always refer to the MSKermit version 2.30
assembler source code. The assembler source to MSKermit also
served as a design outline, although it was difficult to
maintain much of this outline in a conversion from assembler
to C.

I also referred many times to a version of CKermit for
Unix systems. Although there is no terminal emulation code
supplied with this version of Kermit, it helped in the
general design layout of the source modules and also helped
with the function naming conventions used by this program.
In fact it was my original intent to get a version of CKermit
going for MS DOS systems I now understand someone has already
done this somewhere.

Special thanks to Bill Wood who located an error in
the video system of CVT100 version 1.0. Not only did he
locate the error but also provided the code to fix the error!
This fix is incorporated into CVT100 version 2.0.