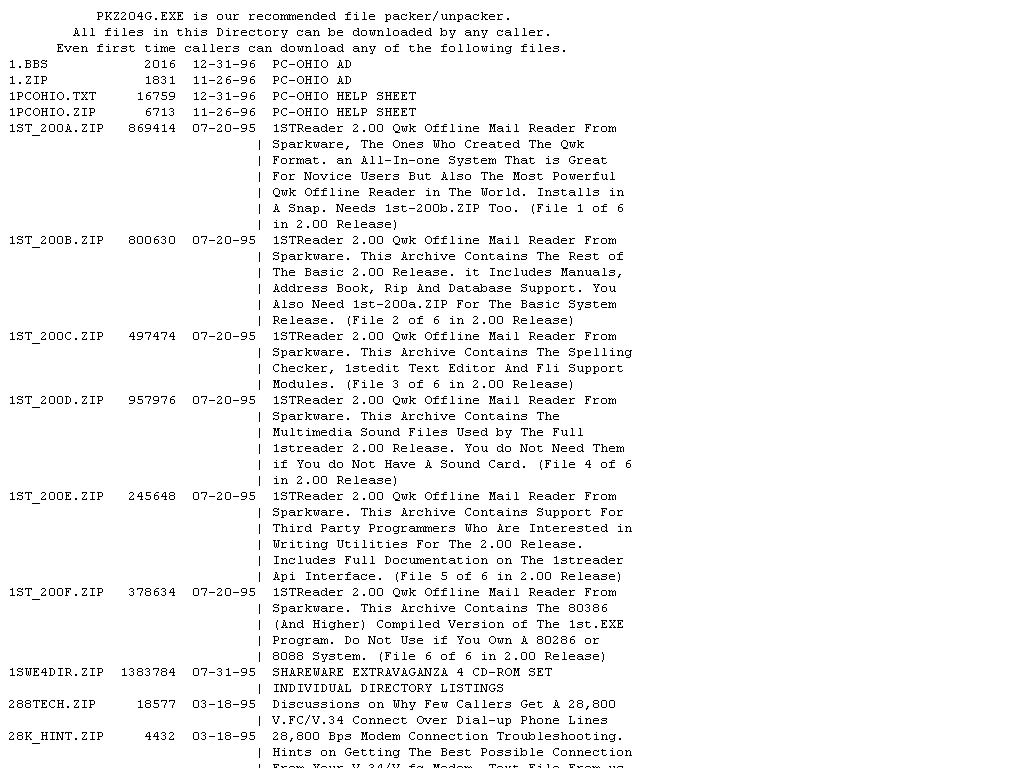 Contents of the TSCRIPT.DOC file

Four files, TLOGON.RS, TMAIL.RS, TFILE.RS, and TLOGOFF.RS are scripts made
for use with Robocomm. They exist because there is no prompt definition
available for interfacing Robocomm with the TriBBS software. These scripts
are specifically designed for the BBS using the TriBBS software version 5.0.
All have been tested successfully. The scripts can be used on any other
BBS using TriBBS software, but editing the scripts for use may be necessary
for them to work properly.

The TMAIL.RS script has been improved to deal with the event that there
are no QWK messages to receive. The script will correctly answer "N"
(for No) to the "Download This Packet (Y/n)?" prompt if the number of
Total Messages to download is zero. This prevents downloading an empty
QWK packet, saving you telephone costs.

NOTE: In order to use these scripts, Robocomm 4.1 or later is required.

NOTE: The scripts were tested on a BBS loaded with TriBBS version 5.0.

The Capture File
----------------
Upon starting the first script (TLOGON.RS), it opens a capture file so you
can examine the history of the script's progress after hanging up. The
file is created in the root directory of the C: drive. Everytime this
script is executed, the file is overwritten with a new history. If you
want to append to this file rather than overwrite it, look for the keyword
CAPTURE in the TLOGON.RS script. On the same line is the word OVERWRITE.
Replace this word with APPEND.

The name of the capture file is set to C:\%ID%.CAP. Note that the macro
%ID% identifies the BBS ID of the currently connected BBS.

That's why a CAPTURE command is necessary for each of the scripts. If only
TLOGON has this command and the rest of the scripts don't have it, the
capture file will show only the progress of the TLOGON script.

The TLOGOFF script is written in a way that will allow you to capture the
user-specific personal data at log-off time.

%BBS##% - Translated to field number ## from the Directory-BBS record
for the currently connected BBS. See Appendix "A" of
SCRIPT.DOC (provided with Robocomm 4.1) for a complete list
of the BBS## macros.

%ID% - Translated to the BBS ID of the currently connected BBS.

%QWKDIR% - Translated to the configured directory in the
Configure/Data & Logs menu in Robocomm for mail packets.

%REPDIR% - Translated to the configured directory in the
Configure/Data & Logs menu in Robocomm for outgoing replies.

%DLDIR% - Translated to the configured download directory in the
Configure/Data & Logs menu in Robocomm for file downloads.

%UPDIR% - Translated to the configured upload directory in the
Configure/Data & Logs menu in Robocomm for file uploads.

%P##% - Translated to the text parameter number ##, which was entered
by the user when he/she creates the "execute script" agenda
item in Robocomm.


Forced Hang Up
--------------
All scripts have a conditional clause in each WAITFOR command that forces
a drop carrier if the script sits idle on a BBS prompt without responding.
This happens if part of the BBS prompt string expected by the WAITFOR
command is jumbled up due to line noise. For example, a WAITFOR command
expects "Enter Selection" but your modem receives "Eter Selection" from
the BBS.

The WAITFOR command is timed according to the TIMEOUT command, which is
set differently in each script. If the time specified by TIMEOUT
(in seconds) is exceeded while waiting for an expected string, a forced
hang up occurs with a message to Robocomm's message window saying
"Forcing Hang Up."

This will let you sleep while Robocomm runs the scripts.

*NOTE* The TMAIL script has a 4-minute timeout period. While TriBBS
zips the new messages to send to you into a packet, this timeout
period is ticking away. If you have a lot of conferences
selected for QWK packet downloading, increase this value in the
TIMEOUT command.

The following section describes script operation for each script.


TLOGON.RS
---------
This script is used to log onto the TriBBS. Nothing special about this
script. Just make sure that all required parameters in the BBS directory
menu in Robocomm is entered.


TMAIL.RS
--------
This script opens the QWK TriMail door and starts downloading all mail from
your selected conferences. Before doing so, it first renumbers all your
previous QWK files from QWK to QW1, QW1 to QW2, and so on, up to 9.

The script then asks for a download of QWK messages. While TriBBS searches
the message base for new nessages, the script watches for the string
"Total Messages: 0" result after the search. If this string is caught,
no download occurs, even if other files such as Bulletins and News are
found. A message is sent to Robocomm's message window: "No QWK Messages
to Receive."

Then, after the download (or attempted download), the script checks for
the presence of a reply packet file (.REP) in the configured upload
directory specified in Configure/Data & Logs in Robocomm. If it exists,
it immediately begins uploading it. If it does not exist, a message is
displayed in Robocomm's message window saying "No Reply Packet to Send."
The script then exits from the script to the Robocomm agenda system level,
whereupon the next script in line gets executed.


TFILE.RS
--------
This script opens the File menu and downloads and/or uploads files specified
in the input parameters. Only one filename for each process (download and
upload) can be specified.

The script includes an option to send an upload file to the Sysop only.
See the next section "How to Load the Scripts in the Agenda in Robocomm"
under "Loading TFILE.RS" for more information.

The TriBBS system will ask for a description for the upload archive file
before commencing the upload. The script bypasses this description prompt
with a carriage return. This will cause TriBBS to search inside your upload
archive for the files FILE_ID.DIZ and DESC.SDI, whereupon, if found, the
descriptions therein will be posted in the file directory. It is therefore
prudent to include a description for your upload archive in FILE_ID.DIZ
and/or DESC.SDI, and to include these files inside your archive.

A FREE program is provided to facilitate description entries for your
archive. It's called DIZGEN, zipped in an archive and included in the
TSCRIPT.ZIP archive. For more information, see the next section "How to
Load the Scripts in the Agenda in Robocomm" under "Loading TFILE.RS" and
the section "FILE_ID.DIZ and DESC.SDI" at the bottom of this file.


TLOGOFF.RS
----------
Logs off the BBS. This script is written in a way that will allow you to
capture the user-specific personal data at log-off time.

You might have guessed that TLOGON.RS must be loaded first, and TLOGOFF.RS
loaded last. TMAIL.RS and TFILE.RS can both be loaded in between these
two in any order, or only one of them can be loaded. It is ideal to load
both TMAIL.RS and TFILE.RS, since you can "disable" one of the scripts to
keep it from executing during run time. You do this by highlighing the
script in the agenda and pressing the + key on the numeric keypad until
a checkmark () appears next to it; this makes the script a completed item
as far as Robocomm is concerned, and that script won't run. This way
there's no need to delete a loaded script and re-load it when you need to.

*NOTE* When this agenda is "Reset" in Robocomm, all scripts are reset
and become active.

These script files should be located in the same directory where Robocomm
is.

You can edit the scripts as you like, but don't do it until you gain an
understanding on how the scripts work. Both TMAIL and TFILE have been
carefully programmed to work together with TLOGON and especially TLOGOFF.
See the SCRIPT.DOC (included with Robocomm 4.1) for details on developing
your own scripts.

In my opinion, the script language is not all that great. There are some
serious limitations to an automatic, script-run agenda, especially if
Robocomm has no prompt definition available for a BBS software. One
such limitation which I had to deal with is that you can't use an IF
command to determine the relationship between two strings.

The next four paragraphs show how to load the scripts. Not all the scripts
are loaded the same way. TMAIL and TFILE both have input parameters which
must be entered at load time, and TFILE's input parameters must be
re-edited for files to upload and/or download everytime it is used.