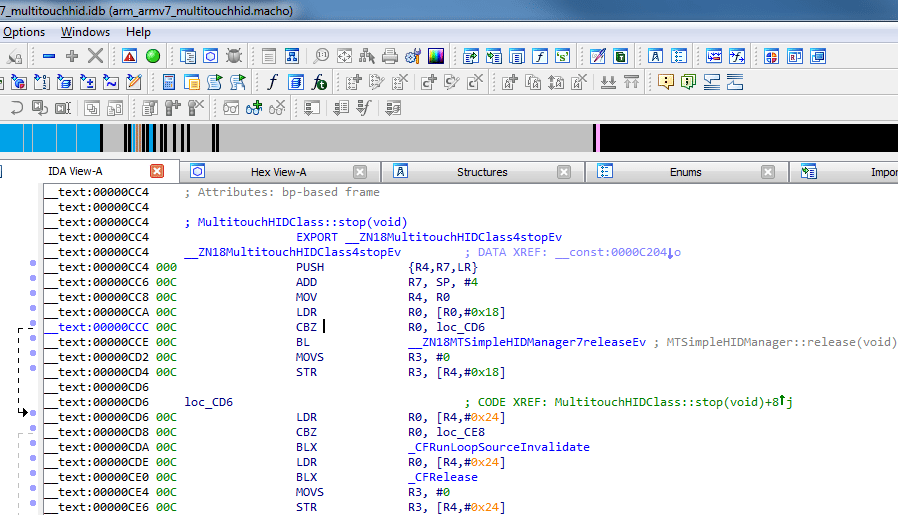 Contents of the TOASM.DOC file

This Shareware version of TOASM is fully functional but somewhat
limited in the size of the files that can be converted. The symbol
table is restricted to 1024 entries to reduce the memory required.
The number of possible user comments and user labels is also reduced.
This is to allow users with limited available memory to use TOASM.
Registered users will receive two copies of TOASM.EXE, one with
similar capabilities to this version and one optimized for 640kb
equipped machines. Registered users will also receive one free update
and discounts on further updates.

Registration is only $45.00! Just send your check or money order to the
above address.


TOASM is a program which converts .EXE and .COM files to assembly
language. The generated assembly language is fully compatible with
MASM 4.0 from MicroSoft. While many programs can be converted without
intervention by the user, the user can also provide input through a
.USR file to improve the results. Several programs are included with
TOASM to aid the user in developing a .USR. Also included are several
programs which demonstrate the operation of TOASM.

DUMP is a program which will dump any file in both hexadecimal and
ascii to either the screen, a printer or a file.

FREF is a program which looks through a specified file for references
to addresses provided by the user.

TESTEXE.EXE is a EXE type program which is being used in the
development of TOASM. Each time a problem is discovered converting a
EXE type program, that problem is added to this file. It has no
practical value as anything other than a test for TOASM and to
demonstrate the operation of TOASM with .EXE type files.

TESTEXE.USR is a sample .USR file which is used to convert
TESTEXE.EXE.

TESTCOM.COM is a COM type program which is being used in the
development of TOASM. Each time a problem is discovered converting a
COM type program, that problem is added to this file. It has no
practical value as anything other than a test for TOASM and to
demonstrate the operation of TOASM with .COM type files.

TESTCOM.USR is a sample .USR file which is used to convert
TESTCOM.COM.

TST.BAT is a batch file which will convert both TESTEXE.EXE and
TESTCOM.COM to assembly language. The user may need to change some
commands in this file for different assemblers and/or linkers.


TOASM is started from the DOS command prompt. The only required
argument is the file name of the file to be converted. Two optional
parameters are available.

InFil is the name of the file to be converted. The file name extension
(.ext) is required.

OtFil is an optional name for the generated output file. If not
provided, then the .ASM file will be named InFil.ASM where InFil is
the same as the input file name. It is usually a good idea to provide
the OtFil name so that the original InFil is not overwritten when the
.ASM file is subsequently assembled and linked.

UsrFil is an optional name for the .USR input file. If not provided,
the .USR file (if any) will be presumed to be named InFil.USR where
InFil is the same as the input file name.


Please execute the TST.BAT file included with TOASM and refer to the
output file (TEXE.ASM) for the following discussion.

The first line generated by TOASM is a title line made up from the
file name of the file to be converted.

Next, any macros used will be found. All "RET" instructions are coded
as macros so that "PROC" statements are not needed.

Following the macros, several "EQU" statements will be found which are
included to reduce the size of the generated file.

The next line is pretty interesting! It defines a label called junk!
This label is only needed if an XLAT instruction with segment override
is found in the file to be converted - MASM gets upset if no label
follows the segment override.

The "Initial Seg Values" comment line shows the segment values found
in the exe header for .EXE files or the presumed values for .COM
files.

While none occurred within the test files, any line containing code
which TOASM does not understand will be flagged with '?' followed by a
comment describing what TOASM did not like about the instruction.
Lines flagged in this manner are not preceded with a ';' so that MASM
will generate an error when the line is assembled. The number of
lines flagged in this manner is displayed in the 'ERRORS' line of the
execution screen. The most important part of any file conversion will
be to include instructions in the .USR file to resolve any of these
errors.

Segment labels are prefixed with 'S' while all other TOASM generated
labels are prefixed with 'L'. The remaining characters within labels
are the 4 hex characters which relate to the offset within the input
file of the label. For .COM input files, the hex value will be the
actual loaded memory offset (file offset + 100H) of the label. For
.EXE files, the hex value denotes the offset within the load image
contained within .EXE file.