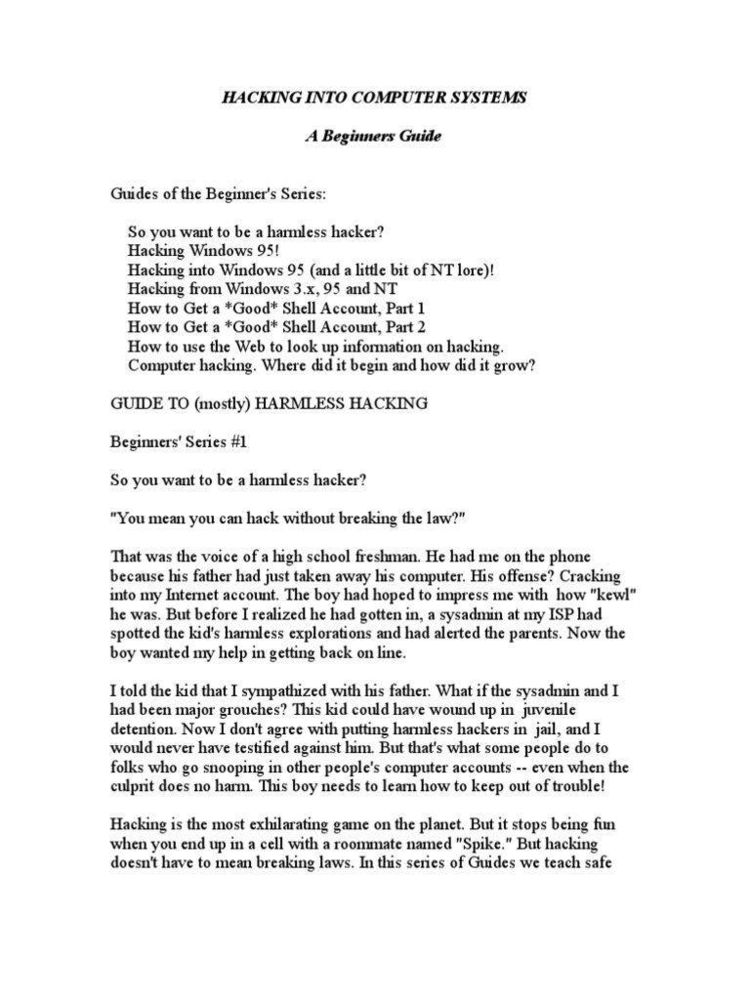 Contents of the OVERVIEW.DOC file

A while back I caught the tail end of a discussion on the Borland RT
about learning how to program in Assembler. I got the impression that many
people think that programming in Assembler is very difficult to do.

Although programming in Assembler isn't exactly the same as programming
in C they do share a lot of the same concepts and the most difficult part of
programming, defining the problem, has to be done for either language before
a solution can be implemented.

A large portion of a program's code involves making decisions or moving
data around from point A to point B. Pretty simple stuff - even in assembler.

do the same as these assembler statements.


If assembler and C both do the same thing why bother to learn
assembler ?

Even with the excellent compilers available today there are times
when the compiler does not generate the most efficient code possible. For
the majority of the time that would not be a problem - but some types of
applications (real time process control, arcade games, etc.) may need every
last ounce of performance that can be squeezed out of the processor.

To illustrate this I compiled spam.c (one of the files in this archive)
at the command line using the following parameters:


The C code routine that we are examining is move_ega.


The assembler output for the code (after removing the '?debug' lines
and adding comments) was as follows:


The same function (in tools.asm) was written in assembler as follows:


The compiler has to translate the C statements by selecting
sequences of Assembler instructions that will perform the desired task. It
has to do this without knowing the overall purpose of the function. Not an
easy task.

On the other hand, a programmer working in Assembler can make
judgments and decisions based on the context of the code that a compiler
would find very difficult to do. This doesn't mean that compilers always
make bad decisions when selecting instructions or that programmers always make
good ones - I'm just trying to point out that if you need maximum efficiency
in sections of your code then you may want to re-write those sections in
Assembler.

There are many good books available on 80x86 Assembler programming that
will help you to learn the instruction set and memory addressing modes. A
shareware program called LW86 is a pretty good POP UP reference for the
instruction set or you could buy Nortons Guides for Assembler which is also
very good.

If you are currently programming in C then you probably already have a
book or two on the DOS environment. You will also need to get some books that
cover the BIOS and hardware that you may want to control directly.

As with C programming you won't learn everything overnight. It takes a
lot of practice to learn any language and Assembler is no exception. In the
long run I think that you will find that it is worth the effort. Besides
allowing you to write faster, smaller programs you will find that the things
you learn programming in Assembler will have a positive effect on your C
programming efforts.


To demonstrate some assembler programming I put together a few routines
that can be used to develop a real time arcade style game (it could be turned
into a DEFENDER type game without too much trouble).

It is divided into several parts.

To help develop graphics for the game there are

The game portion is divided into

There are also some graphics files (rather crude because I'm not
an artist).

The *.lbm files were created using Deluxe Paint II and are the files
used by SHOWLBM and SPAM to generate the final graphics files.

The *.s16 files are the title screen and landscape files (generated
by showlbm.

The *.e16 files are the sprite files generated by spam.

The *.dat are files used by spam to find the source (*.lbm) files
used to generate the sprite files.


The graphics tools (spam & showlbm) were originaly written entirely
in Assembler and were typical programmer tools - pieced together from a bunch
of different projects,no comments, and hacked up pretty bad. I re-wrote
portions of them in Turbo C and reformatted the assembler parts to take
advantage of the C parameter passing features in Turbo Assembler. I also
added comments though they are still rather sparse.

The idea behind using C and assembler was to show how easy it is to
use assembler functions with C. TASM takes care of most of the SEGMENT
problems and lets you concentrate on the functions.

See TOOLS.DOC for more information on the graphics tools.

Most of the routines are not horribly complicated, but if you are new
to assembler programming you will probably have to spend some time studying
them to understand what they are doing.

I hope that you find the things in this archive useful and that you
don't find assembler programming too frustrating.