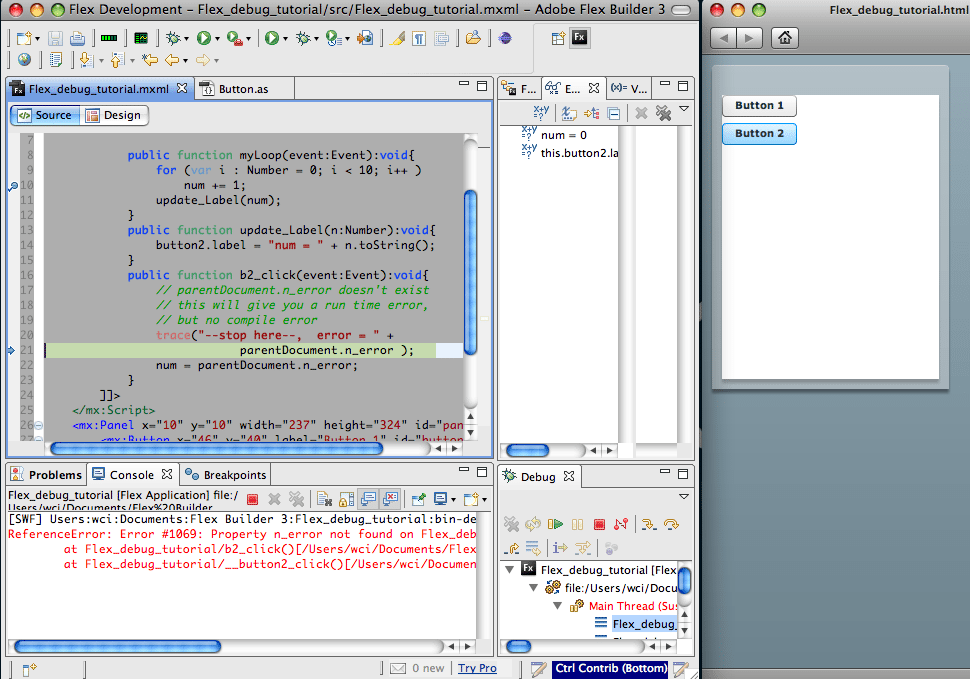 Contents of the BXD2.DOC file

This software is a full-screen debugger for the IBM series of
personal computers and very close compatibles. The major feature
of bXd is its ability to run without disturbing the display
screen of the program being debugged. It supports both the MDA
and CGA boards (also CGA specific modes of EGA).

Some of the other features are:
- Support for Symbol Files
With this feature code will be disassembled using label
names and addresses can be specified using label names.
Two symbol file formats are supported; including the
format generated by the widely used MicroSoft linker.

- NMI Reset Switch
This requires a hardware switch and gives a user the
ability to trap any program at the press of a button
(even if interrupts are off).
By default, this trap is disabled because it causes
problems with some EGA boards.

- Conditional Breakpoints
Users can set up to 10 breakpoints that can be triggered
when user-set conditions are satisfied. For example, a
breakpoint can be enabled only when AX register is
greater than 10 and when the Zero-bit of the flag
register is set.

- Online Help
Detailed descriptions on all the available commands.
First time users are encouraged to go through them all at
least once.

Simple, but can also cut the mustard.

During the design phase of this software, the user and his
goal when running any debugger was kept very much in mind.
Together, the command set, screen design and the user-interface
enable any program to be debugged effectively and transparently.

After a few debugging sessions, you won't have to worry about
how to use bXd and can instead concentrate on your goal -
debugging your code.

bXd is a "shareware" software. You most probably got it from a
bulletin board or a friend at no cost to you. After using it for
sometime, I'm sure you'll appreciate not only the capability but
also the overall design of this software. You are invited to use
and distribute it to whomever you wish. This is my contribution
to the "shareware" concept.

You must understand that someone, namely yours truly, spent
quite a few hours on this software's development. It seems only
natural that I, like other independent software developers, be
encouraged so that users like you continue to have access to good
software at a reasonable cost. This encouragement and your
contribution to the "shareware" concept takes in the form of the
user sending in a registration fee.

Sending in of this contribution is usually the end of most
"software for bacon" deals - not so this one. If you send the
contribution, you will receive a copy of the non-shareware
version of bXd (bXd3). The '3' at the end of bXd is fully
warranted. There are two major additions and they are -

- Source-Code Debugging
This option will support all the compilers that generate
source-information and that can be linked using MS linker.
This includes MicroSoft C and Turbo C (other languages ok
also). It will -
- display in src or src/asm mode
- auto-sync of code and source information
- unlimited number of source files

- Dual Monitor Display
One disadvantage using a full-screen debugger to debug
graphics program with one monitor, is that the target program
cannot access the screen directly. With this new dual-monitor
debugging ability (two monitors with different adapters
required) there is no such restriction. Your program can
access the video screen and the adaptor board directly.

I hope that the addition of these two extra features, a
printed manual and a guarantee of a better product will urge you
to keep your part of the "shareware" bargain (pun intended) and
send in the bacon.


bXd AND YOUR PROGRAM:

Below is the format of invoking bXd from the DOS prompt.